Crowdsourcing for Writers: The Secret to Connect With Your Readers and Find Your Best Ideas

We think of authors as loners. Locked in dark caves with nothing but their typewriters and candles, they painstakingly pound out one word after another, bleeding on the page to create a story they hope the world will accept. This image couldn’t be further from the truth. 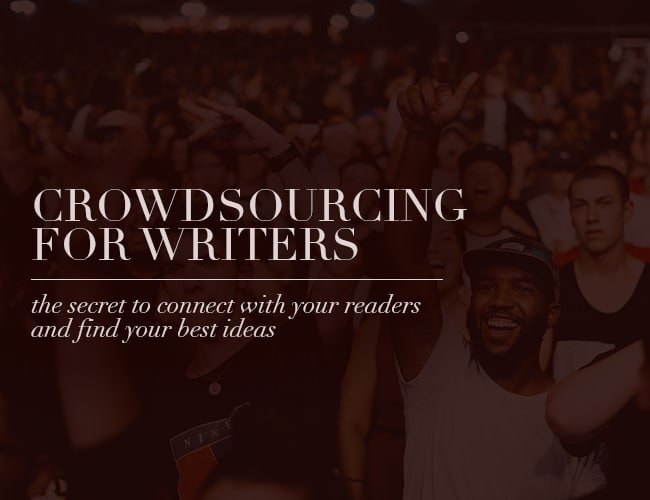 As John Donne wrote, “No man is an island entire of itself; every man is a piece of the continent, a part of the main.” One way you can feel more like part of the main is by utilizing the tool of crowdsourcing.

Crowdsourcing is the practice of obtaining information or input into a task or project by enlisting the services of a number of people. It is group think, and it’s a tool authors typically neglect.

It is incredibly easy to do. All you need is a way to communicate with a group of people. You can use a free online survey, or a Facebook page, or even the comments section of a blog. The simplest way to crowdsource something is to give a group of people multiple options and have them tell you what they like and dislike about each one.

In the few years that I’ve been writing fiction, I’ve used crowdsourcing three times, and I’ve never regretted it.

1. I crowdsourced to find what I should write

When I first started writing fiction, I had no idea what kind of fiction I should focus on. Other writers told me to write what I liked to read, but I loved reading everything. I routinely devoured nonfiction, biographies, memoirs, science-fiction, horror, thrillers, and crime. I think I read everything but romance.

I wanted to jump into writing a novel and I knew genre was important, but I couldn’t figure out which way to go, so I crowdsourced it.

I compiled a book of 23 short stories I had written. Each of the stories represented a different genre of fiction I was interested in writing. At the back of the book, I put a link to a survey that asked readers for feedback.

As a new author with almost no readers, I didn’t get a lot of responses, but the ones I did were invaluable. They shaped the series I’m currently writing.

Additionally, the readers that filled it out are some of my most dedicated readers. Several are even part of my ARC team.

2. I crowdsourced to find a cover design

I finished the first book in my series and was at a lost for what to do next. A cover designer I had partnered with had sent me several designs for the series, and I had no idea which one to choose. They all looked good to me, so I decided to ask the few readers I had.

My email list was still getting off the ground then (about 250 people). I put together a post in which I had all four covers designs, and I asked them to vote.

The response was fantastic. They overwhelmingly voted for a cover I wouldn’t have chosen, and they were right. I love the cover now and can’t imagine using any of the others.

3. I crowdsourced the idea for my next series

At the end of 2018, my first series will have six books published. With so much of the story told, I’m starting to get antsy. While I don’t want to start writing my next series for several more month, it took me a year to build the world and the plot for my first series, and I’m afraid I’ll face the same development timeline again. In hopes of getting a jump start on the process, I’ve been journaling different story ideas.

I’ve come up with four that I really like, and I’ve been unsure which one to go with.

To answer the question, I crowdsourced the ideas to my readers. They are the ones who are going to buy the books. Why shouldn’t they get a say in which series I chase?

I put up a quick survey using Survey Monkey this week, and the responses has been fantastic. To my surprise, my readers loved an idea that I’d just thrown into the list for fun.

This weekend I started building the world and I couldn’t be happier with it. My readers were right. It was the best idea out of the four.

No Writer Is an Island

As an author, you aren’t alone unless you want to be. People will happily give you feedback and input on your work, and if you can get them to buy in at the onset, they will be more likely to take ownership of the finished product.

What is something you as a writer might crowdsource? What reservations are holding you back from asking others what they think?

List out your options, be bold, and send them to your audience — even if that audience is just a few people. You might just be surprised at the result.

Have you ever tried crowdsourcing anything? What is something you might crowdsource? Let us know in the comments.

Not sure how to crowdsource your writing? Good news: you have a great community right here at The Write Practice that will be happy to give you feedback.

Today, take fifteen minutes to come up with three story ideas. Then, share your ideas in the commments below and ask others to choose which one they’d most like to read. Be sure to vote on other writers’ ideas, as well! Which ones do you think they should write?