Polysyndeton vs Asyndeton: Definition and Examples

by Liz Bureman and Joe Bunting

You know how sometimes you're reading a book and a writer will use a really long sentence without commas or periods and they're just going and going and you kind of run out of breath just by reading it but it's also kind of nice if you're into that sort of thing?

Well, there's a term for that! It's called polysyndeton, and in this post, you're going to learn exactly what polysyndeton, as well as the corresponding technique of asyndeton, and how and when to use them both in your writing. Let's get started! 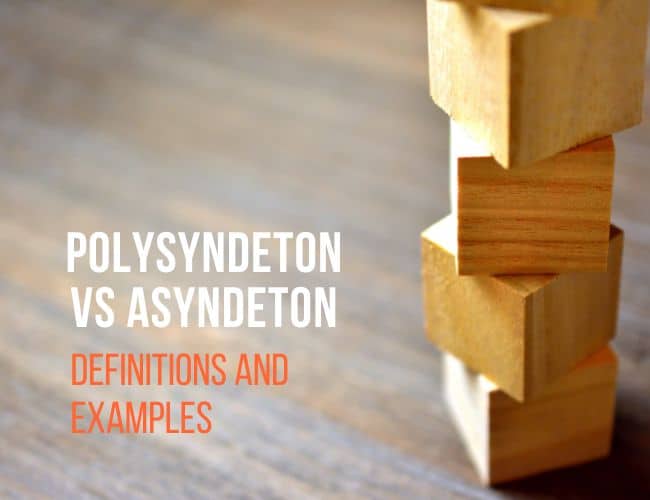 Polysyndeton is a literary device in which conjunctions (e.g. and, but, or) are used repeatedly in quick succession, often with no commas or other punctation, even when the conjunctions could be removed.

It is often used to change the rhythm of the text, to make it either faster or slower, and it can convey a sense of gravity or excitement. It can also be used to intentionally overwhelm the reader, giving them very little room for mentally or visually breathing with the lack of commas.

Below are a few more examples now that you know what to look for.

Example from Charles Dickens' A Tale of Two Cities:

… Jerry stood: aiming at the prisoner the beery breath of a whet he had taken as he came along, and discharging it to mingle with the waves of other beer, and gin, and tea, and coffee, and what not, that flowed at him, and already broke upon the great windows behind him in an impure mist and rain.

A bit gross, but you get the idea.

Example from Mark Twain's The Adventures of Huckleberry Finn:

I got into my old rags and my sugar-hogshead again, and was free and satisfied. But Tom Sawyer he hunted me up and said he was going to start a band of robbers, and I might join if I would go back to the widow and be respectable. So I went back.

Twain was a big fan of polysyndeton and the first pages of Huckleberry Finn are littered with fun but unnecessary conjunctions.

Mrs. Hurst and her sister allowed it to be so—but still they admired her and liked her, and pronounced her to be a sweet girl, and one whom they would not object to know more of.

Austen uses polysyndeton frequently to convey a sense of enthusiasm and breathlessness.

There was a low rumbling of heavy sea-boots among the benches, and a still slighter shuffling of women's shoes, and all was quiet again, and every eye on the preacher.

Melville is constantly carried away by polysyndeton, which adds to the gravity of his prose.

The Opposite of Polysyndeton: Asyndeton

Polysyndeton has an opposite, called asyndeton (something Joe is very fond of using). Asyndeton is what would result if you replaced all the conjunctions in the sample sentence above with commas, as in the famous Julius Caesar quote, “Veni, vidi, vici.”

It is important to note that polysyndeton and asyndeton are not necessarily indicative of a run-on sentence. A run-on sentence has no conjunctions or commas to indicate transition of ideas or phrases, but barrels on as if it were two sentences that should be properly separated by a period. Polysyndeton and asyndeton maintain the elements of transition or connection, and are grammatically functional techniques.

Do you like to use polysyndeton or asyndeton in your writing? Let us know in the comments.

Write for ten minutes about a sudden cold snap, using polysyndeton to thrown in as many conjunctions as you can. After the ten minutes, go back through your prose and replace all the conjunctions with commas. See which version of your practice you like better and post your practice in the box below, leaving feedback for a few other writers.