Fill in the blank: I can’t finish my draft because _______. Are you sure that is what is holding you back? 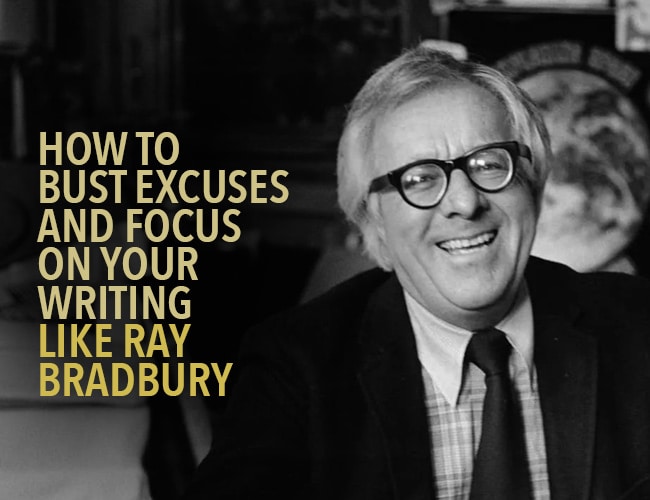 This is one of the busiest months of the year for me. I’m usually disciplined, but there are some especially busy seasons when writing is hard to prioritize.

As one of my classes began reading Fahrenheit 451 this month, I remembered a letter Ray Bradbury sent to a librarian about how he wrote the novel. Ray Bradbury’s writing tips were just what I needed to get back to finishing my book.

Fahrenheit 451 is a dystopian novel set in a world where the public stops reading for the distraction of television screens. Books become outlawed because they cause unrest between people.

In the blog and book Letters of Note, there is a 2006 letter from Bradbury to the Assistant Director of the Fayetteville Public Library about how he finished the first draft of the novel in the basement of a college library.

Bradbury explained in his letter that he didn’t have an office. One day, he was in the library at U.C.L.A. and heard typing downstairs. He followed the sound to the basement and realized he could pay to use a typewriter for ten cents per half hour.

He returned with a bag of dimes and spent nine days pounding out the first 25,000 word draft of the novel which he called “The Fireman.”

A science-fiction magazine published “The Fireman,” but Bradbury’s editor at Ballentine later asked him to expand it into a novel. Bradbury returned to the library basement with another bag of dimes and finished 25,000 more words to complete the draft in nine more days.

The Inspiration of Location

Bradbury was a champion of libraries, an avid reader, and a joyful writer. He is a terrific example of how to overcome obstacles and excuses to get the draft done.

Instead of listing all the reasons the library might be distracting or limiting, he ran out for a bag of dimes and got started.

He drew inspiration from the library itself, and he includes many allusions throughout the book that attest to his reading. I don’t have to write in a library to find inspiration around me. Wherever we’re writing, we can draw from the quirky details, the ambiance, and the character studies that surround us.

“
Need inspiration? Look around you, and draw from the quirky details, the ambiance, and the character studies that surround you.
Tweet this
Tweet

I’ll admit it’s a little intimidating that Bradbury finished his book in two nine-day sprints. That means he wrote an average of 2,800 words a day. The ticking clock of paid typewriter time probably also spurred him to a quicker pace.

I don’t have to pay to type, but I can write in fifteen to thirty minute sprints. To sprint, just open a document, set a timer, and write as fast as you can.

When I revisit my manuscript daily, that saves time too, because I don’t have to reread large sections to remember where I left off.

“
How quickly can you write? Set a timer and write for a fifteen minute sprint.
Tweet this
Tweet

The most important part of Ray Bradbury’s writing tips and letter for me though is that he finished this story, not once, but twice.

I often get stuck in the middle or final act of a story and drag my feet, waffling over details that will be cut in revision anyway. Sprinting to the finish keeps me from overthinking everything and helps me meet my goal of a finished draft.

I love this letter about how he wrote Fahrenheit 451, because it reminds me that I am often the main obstacle holding myself back.

I don’t need a library or a typewriter. Instead, I need to approach my desk each morning with the joy Bradbury felt about his beloved libraries.

Then I need to finish the draft.

Maybe I’ll put a bag of dimes on my desk as a reminder.

What do you think of Ray Bradbury’s writing tips? How do you focus on your writing? Let us know in the comments.

You may not have to pay for typewriter time, but for today’s practice, I’m giving you a hard and fast time limit. Take fifteen minutes to write a scene as fast as you can. Not sure what to write about? Look around you, and draw inspiration from where you’re sitting right now.

Remember, your goal isn’t to write a perfect story. Your goal is to get out of your own way and write. How many words can you get on the page?

When your time is up, share your writing and your word count in the comments below. Remember to leave feedback for your fellow writers!