The 7 Types of Plots: The Quest

Yeah, like you're going to see a list of plot types that doesn't include the Quest. The Quest is a search for a place, item, or person that requires the hero to leave home in order to find it. Sometimes the item is just a MacGuffin to drive the plot along; other times the thing driving the quest is specific to the story's circumstances. Either way, the hero is leaving home to find whatever the heck the story demands, and we get to come along for the ride. 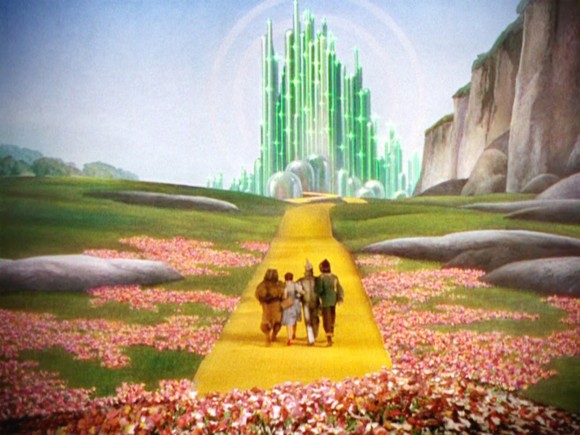 “We're off to see the Wizard.”

The Quest is the plot type most likely to have a group of main characters rather than one protagonist in the main eye of the story. The rest of the party generally takes one of four appearances:

If you've read either of the other two entries in this series, you've probably got an idea of what this entails. Kickstarts the plot and gives the hero and the rest of the party a mission to accomplish.

Obviously our heroes are not going to get to their end goal that easily. Most of the journey is over enemy territory or hostile land, and obstacles pop up left and right, like dandelions in the spring. Obstacles come in several flavors, like monsters (kill/escape, rinse, repeat), temptations (see a good portion of the Odyssey for examples), a rock and a hard place (Scylla and Charybdis being the classic example), or a journey to the underworld. Amid these tests come periods of rest where the party can regain their strength (or count the bodies, if the party is the third type).

They're so close! Our heroes can see the Emerald City! They're almost there! Oh, wait, the Wizard won't actually help them until they kill the Wicked Witch of the West. Damn. Well, that's annoying. Our heroes still have some work to do before they actually complete their Quest.

Now come the final tests of our heroes. Often these come in sets of three, like in Indiana Jones and the Last Crusade. Usually our main hero is the only one who can complete the final test. Success! And then our intrepid band of heroes (or just one hero, in case everyone else is dead) makes an amazing escape from death, either by running away or by killing whatever bad guys are left.

Huzzah! Our hero(es) have completed their quest, and get their treasure/kingdom/princess/trip home.

Most stories involving the Holy Grail are Quests, as is the Lord of the Rings trilogy, The Princess Bride, and Finding Nemo. If information is considered to be the sought-after item in the Quest, most police/legal procedurals could be considered miniature quests. By varying the elements of the Quest story, the plot type can still stay fresh.

Pick one of the stages of the Quest and write a scene from that stage for fifteen minutes. Post your practice in the comments section, and check out the work of your fellow writers.