How You’ll Recover From Writer’s Block

Writer’s block. Do the words give you shivers? 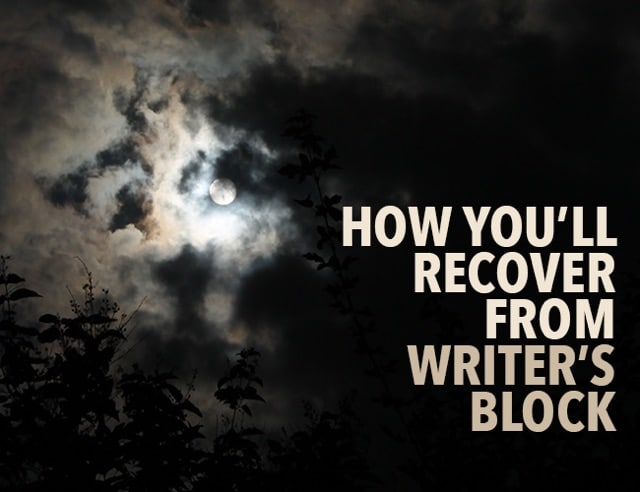 I’ve struggled with writer’s block many, many, many times. I know the fear it causes (I’ll never write again, I can’t do this, I will never finish this book, etc.). I also know how to get out of it.

Brace yourself. This won’t be pretty, but if you’re willing to fight, it will work.

The first thing you have to do is have patience with yourself.

It’s okay to be stuck.

It’s not the end.

It’s normal. Every single writer goes through it, including award-winning ones. I remind myself it’s okay I haven’t written in a while, and also that when I’ve written, it’s often been terrible. Again—this is normal.

The next thing you have to do is start refilling your creative well.

I ask myself: when was the last time I enjoyed something creative? When did I read a book that filled me with the love of stories, or watch a movie that fired my imagination, or spend some time enjoying music or some other creative art just for beauty’s sake?

Too often, I find I haven’t been enjoying the arts. I’ve been either ignoring them, or trying to read in some strange, analytical way that deprives literary food of nutrients.

I must allow myself to enjoy beauty again. To indulge in wonderful words, music, and beauty. Until I remember why I wanted to write in the first place, I can’t give myself to writing.

And the final, terrifying thing: give yourself permission to suck, then write.

This is THE HARDEST PART about the slow recovery from writer’s block.

Write something. Write anything. And know that it will suck.

Have you ever broken a bone? Let me tell you about my ankle break last year (yes, this is relevant). I stumbled on a piece of chalk and broke my right ankle. I wanted to be upset, but that would have done no good; my bone was broken, and I had to accept that. In other words, I had to have patience with myself.

The next period of time was challenging. I had to take calcium and get rest. I had to be extra careful with what I ate because I couldn’t exercise. In a very real way, I ended up eating better than I had in a long time. This didn’t just help me heal; it helped my entire body. I was filling my well.

Finally, it was time to enter physical therapy. This HURT. It wasn’t comfortable. It wasn’t even very good at first. I could barely stand on that foot, and walking was ridiculous. I had to give myself permission to suck, then walk anyway, even though I was terrible at it. That was the only way to get better.

This is the way out

There really is no other way. Those three steps work, but they are not easy.

They are worth it.

You can do this, fellow writer. That block is not the end.

How do you fight writer’s block? Let us know in the comments.

Take fifteen minutes and write something. It can be anything: the next chapter of your work in progress, a new short story idea you’ve been tossing around, a letter to a friend you’ve been meaning to write. If you’re stuck, give this writing prompt a try:

The day before a big performance, a character is stung by a bee.

Embrace your suckage. Be brave and bold and WRITE! Share in the comments section, and be sure to leave feedback for your fellow writers.