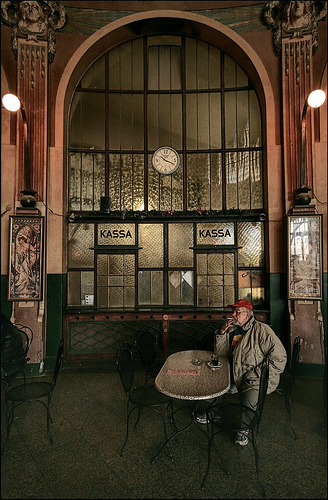 What should you be reading? Here are some suggestions.

If You’re Discouraged Because Your Writing Sucks I am very pleased to be guest posting on Writer Unboxed today. Therese Walsh and Kathleen Bolton have built a blog that regularly makes me want to give up this one and go beg at their door to write for them. This post is about the two different career tracks of the creative: the genius and the late bloomer. Do you know which one you are? Go find out now.

Why Your Work Never Feels Good Enough  On a similar note, but taking a different tack, my friend Jeff Goins writes about that nagging feeling you get as you read your writing that you really aren’t very good. He says:

When you’re just getting started—whether you make videos or write stories or design websites—you battle the voices of self-doubt that tell you that you have no business doing this, that you should stop before you embarrass yourself.

Don’t despair, he says. It’s all part of the process. Give yourself some grace, write anyway, and then grab a tub of ice cream and let Ira Glass console you.

A Theory of Everything Why is London burning? Why is the Arab world revolting? Why are the Isreali youth taking to the streets to protest their leaders? And what’s up with the Tea Party?

What does this mean for us writers? I’m not sure, but I do know six people from Croatia, five from India, and one from Azerbaijan visited the Write Practice this month. More people have access to your writing than ever before. That’s pretty exciting. But how do you make a living doing it? I don’t know…

Impossibly Blue A quick short story from Bulgarian writer Zdravka Evtimova (props if you can pronounce her name) about a writer trying to experience her art in the middle of marriage—her husband is in love with someone else—and children—her young son needs all her time. It’s (intentionally) disorienting, but if you can make it through to the end, there’s a nice twist (also, you probably shouldn’t read this if you hate Kafka).

The Prague of My Imagination This article is from Alice Whittenburg, the editor of Cafe Irreal, which is the lit mag that published the above short story. It’s about her experience living and writing in Prague off and on (she lives in Tucson) over the last seventeen years. Here’s an excerpt:

As Greg describes in more detail in his essay, we began to go to movies in out-of-the-way neighborhoods, to go to galleries to see whimsical and sometimes fiercely original art, to look at old buildings with distinct personas (though these buildings still exist, they are now renovated, sandblasted, painted and plastered into pretentious monuments that remind me of Disneyland), and we explored a city with so many hidden corners that it seemed to disassemble and reassemble itself before our eyes to defy being known, and in public places we found a deep chill that the coal-fired heat couldn’t touch (though the apartment in which we stayed was cozy warm), and I learned the complex route from the tram stop to our place (past the brewery, over the tracks, up the hill, up the steep steps, up another hill, around the bend, past the barking dogs, and so on), and I learned to speak a little Czech; to find vegetarian possibilities in a pork-and-dumpling land; and to miss my home as a special and idealized place I rarely appreciated when I was in it.

I love how she describes Prague, a city I’ve longed to visit, and living in a place not-your-own in general. I’ve “lived” short periods in a dozen countries, and I can tell you that learning the route to the bus stop is one of those ordinary experiences turned extraordinary, and your mundane home becomes the most important place in the world.

In honor of bus stop routes, write about your daily commute. What are the landmarks? What are the street names? What do you think about as you drive? Describe your fellow travellers (train passengers, bus buddies, or that guy who stopped next to you at the light and picked his nose).

Write for fifteen minutes (using a timer), and post it in the comments. Have fun!

Joe Bunting is an author and the leader of The Write Practice community. He is also the author of the new book Crowdsourcing Paris, a real life adventure story set in France. It was a #1 New Release on Amazon. You can follow him on Instagram (@jhbunting).