Your #1 Responsibility as a Writer

A writer friend I know adores her hero and heroine so much that she’s afraid of hurting them. 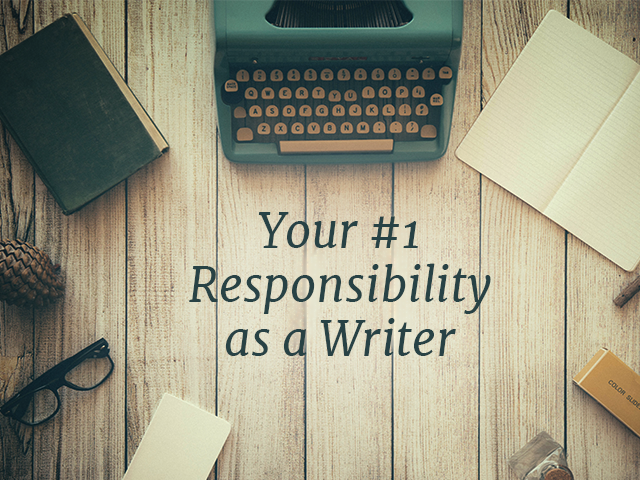 She realizes her story reads flat, but can’t seem to put any real obstacles in their paths, despite the depth it would add to their journeys and the improved experience for her readers. Another writer recently told me he dislikes dark books, characters, plots, anything. He feels that life has enough suffering and not enough happiness.

I agree there’s too much pain in this world, but I also believe there’s a bigger discussion about your responsibility as a writer that needs to take place here at The Write Practice.

In my opinion, your #1 responsibility as a writer is…

To tell the truth.

Because it’s your job to show the world as it is… how it should be… what’s wrong… what’s right. This applies to fiction and nonfiction alike, whether you write humor, thought-provoking essays, or novels with incredible twists and turns.

Every fact in your story can be made-up, but you still should reveal the authenticity of those characters in their particular story, whether it's positive, negative, or somewhere in between.

Harry Potter is much more than a fantasy about a boy wizard. It teaches empathy for the disenfranchised, courage under pressure, teamwork, creative problem-solving and countless other lessons.

That said, I must admit I’m freaked out by my latest novel.

It’s the darkest story I’ve ever written. Each week, I write two new rough chapters and am shocked by the somber subject matter. I yank my fingers off the keyboard and think—I can’t believe I just wrote that.

How long does it take for a dead body to decompose in winter?

What are the physical effects of meth?

How much does a bus ride cost?

I’m a little piece of white bread from Texas. I’ve ridden the bus before, but I’ve never done meth and know nothing about dead bodies. What will my mother say when she reads my book?

My #1 responsibility right now is to the tell the truth of the characters in this story.

I’ve read some of my work to trusted beta readers who are loving it. Despite the dark subject matter, they say it’s balanced with hope and even joy.

They want to know what happens next, despite the poor choices some of my characters are making.

On the flipside, I also believe it’s just as wrong to write for shock value, such as being over gratuitous with violence or sex. I could probably publish Sixty-Nine Shades of Zombie Dinosaur Sex and become a huge bestseller. I could laugh myself all the way to bank. It sure would make my husband happy to retire and to live in a lap of luxury.

But, that’s not the story of my heart and it’s not what this novel calls for. I plan to write the truth of my characters to the best of my ability. No more and no less.

I hope you show your readers the same respect.

Do you think this is a writer's responsibility? How much truth do you include in your writing? Let us know in the comments section.

Today, I want everyone to focus on the same character, Maria. Give her both a big dream and a big struggle: a financial crisis, a divorce, an addiction. What happens to Maria with her dream and her struggle?

Take fifteen minutes to tell his story, then please share in the comments. Remember, if you post a practice, please comment on your fellow writers’ work.