Life is filled with stranger-than-fiction moments. But how do you write a book based on a true story? How do you take those fantastical events and turn them into an even better story? In practice, it's much harder than it sounds! 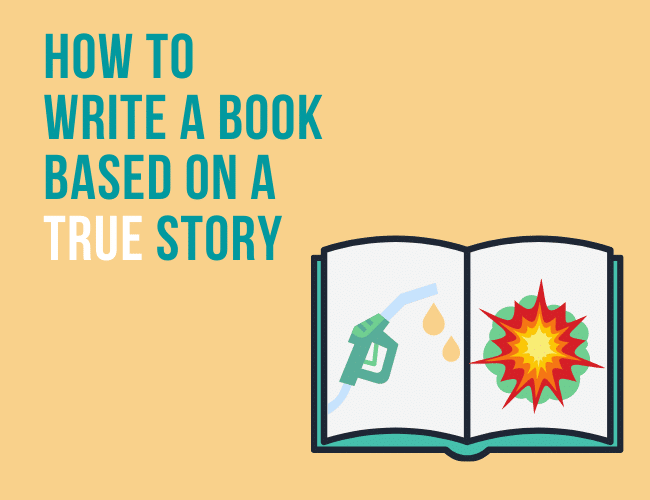 As a writer, you undoubtedly want to capture those moments in an irresistible story that readers can’t put down.

But if you’re anything like me, you’ve found the process to be a lot harder than it should. After all, shouldn’t translating true events into a story be easy? You have everything you need, it seems: characters, events, and the entire plot.

Yet converting true events into the written word almost always proves to be a frustratingly tough chore. The process vexes writers for a number of reasons, and has probably forced you to quit at least one project you’d have loved to successfully finish and publish.

I know this because I, too, have failed at telling what seems to be the “perfect” true story.

My Perfect “Based on a True Story” Story

When I was eighteen years old, someone blew up a local gas station.

I grew up in a tiny town, the kind of place where everyone’s business is somehow public knowledge. And one day in winter we all woke up and one of our three gas stations had gone from a friendly fueling hub to a black crater on the lunar surface.

At first the town was in horrified shock. Yet within the day, I (along with nearly everyone else) had figured out who did it.

The gas station was physically connected to the local grocery store, owned by the same businessman. Sure enough, a disgruntled employee had rigged the station to blow. However, it was just a diversion so he could haul an ATM—stolen from the grocery store—out to the woods where he’d have the time to break it open and steal the contents.

Doesn't this sound like a great foundation for a “based-on-a-true-story” story? It did to me. But in the sixteen years since, I’ve struggled to know what to do with all the craziness and absurdity of my little hometown incident.

4 Steps to Write a Book Based on a True Story

In all stories based on true events, you’ll need to make specific choices about the characters, their motivations, and the events. And in stories that directly or tangentially involve you as a potential character, then an initial, difficult choice has to be made.

Here are four steps on how to write a book that's based on a true story:

1. Remove Yourself From the Story

Nine times out of ten, you, the writer, are probably not the best person to include in the story. (Obviously memoir will be an exception to this rule.)

Why? Because usually when true things happen around us, they don’t happen to us or with us. And if they do, the entire experience becomes filtered through a heavily biased point of view: our own.

The first problem I had writing my gas station story came from this idea. I always filtered it through my own perspective, and I had nothing to do with the story's primary events.

I experienced the explosion, and the follow-up, as a meager (but highly interested) observer. All throughout high school I worked at the grocery story and often ran cash or receipts back and forth from the adjacent gas station. It was basically my second home.

Then, the night of the explosion, I had a shift at the store and watched the CCTV footage that showed the arsonist walking through the building to steal the ATM. I immediately recognized him (despite wearing a baseball cap over his eyes), as did everyone else.

Here’s the problem with all of this: In this version of the story, I’m the hero.

Yet in reality, a bunch of other people—the arsonist, his wife, the policeman who drove over the wire that tripped the explosion, the butchers cutting meat on the other side of the concrete wall when hundreds of gallons of gasoline ignited—are the real characters of the story. I barely garner a mention in any fictionalization of the drama.

So I had to remove myself from the story entirely. It wasn’t mine to tell.

This is the first, and often most painful, step to take when converting true events into written form. And it’s often painful because in many circumstances you are more directly impacted by the events than I was in the arson.

But in most circumstances, it is best to remove yourself from the story. Not only does this free you from your own bias, it begins a process of adaptation that will lead you to see every character for what they—a piece in a storytelling puzzle. You're not recreating history.

You're telling a story.

This is why I invite you to step back, take some time to process, and divest yourself emotionally from the occurrences. It’s the only way to move forward and write a book that’s based on a true story.

Most real life events include many characters. Families are large. Companies employ hundreds of people. Villages and cities house thousands or millions.

But stories—good stories, at least—usually contain just a small handful characters. It’s difficult to do service to large numbers of characters (unless you're Stephen King or you're writing something 100,000 words or longer).

In our efforts to replicate “reality,” we often feel like every personality that was actually there must be included. This rarely results in a good story.

A strong example of this is the 1987 Brian De Palma film The Untouchables. This crime thriller shows the task force that took down Al Capone, focusing on a team of four heroes, some of whom die in the line of duty.

In reality, there were at least nine “untouchables,” not four. What about those other five guys? To tell the story well, the screenwriter rolled all of them together to form four character “types” that made for an entertaining story.

Is the movie “true?” Yes and no. But either way, it’s an entertaining film that captures the essence of who the Untouchables were without being dependent on the line and letter of historical fact.

Your adaptation must do the same. Figure out who is absolutely essential to the story you are telling, and make bold choices. It’ll keep your writing focused and lessen the burden of “getting it right” history-wise, when you should be focusing on getting it right story-wise.

To learn more about character development and the ones you should keep in a story, check out this post.

“
Figure out who is absolutely essential to the story you are telling and make bold choices to cut everyone else.
Tweet this
Tweet

Perhaps a main reason that we write books based on true stories is to figure out the “why.” Why would a serial killer act a certain way? Why did a particular civil rights icon make his or her heroic choices? Why would a disgruntled employee blow up his place of work and not just rob it?

That was my mission when I sat down to finally write the story of the blown-up gas station. I wanted to know why.

Of course, the real motivation was simple: It was the arsonist’s middle-finger to his boss, all while getting money he needed for god-knows-what.

Is this motivation relatable? A little bit.

But is it bold, gripping, and page-turning? Not really.

So I added a second storyline: the arsonist’s wife is leaving him for an old flame, and he suspects it. So not only is he blowing up the gas station to pay their debts, he’s doing it to show her just how far he’ll go to win her attention and respect.

While it’s obviously wrong and illegal, it’s bold and relateable. We’ve all been desperate and dreamed of doing crazy pent-up things. Writing stories is the healthy way of getting those out!

There’s often no way to know the true reason behind every stranger-than-fiction story you want to tell.

You can exhaust yourself searching and researching to find out the “truth.” Sometimes you just have to make the truth up.

And based on the crazy things we see and hear, our made-up truth is often surprisingly accurate.

Just make sure you change names, events, and anything else that could send a lawsuit flying your way!

4. Edit a True Story Into a Great Story

The final change you must be willing to make is structural. Less important than personal bias, characters, and motivations, this change is very specific to the way things went.

Sometimes you’ll get lucky, and the chain of events is ideal for a three- or five-act structure. This was the case for me with the gas station. While I had to create the lead up to and fallout from the explosion/robbery itself, the sequence needed few changes. That’s because it all happened in the span of a day or two.

When events are condensed into shorter timeframes, you’ll find them easier to structure.

But when events are spread out over weeks, months, and years, the work of structuring your story will be much more arduous. What is essential? What can be cut? Can events be rearranged?

Unfortunately, this all depends on the specifics of the history you're rewriting, and I can’t help you there. However, here are a few guidelines to help you.

Essentially, an event or scene can be cut (or severely altered) if:

If none of these three things happen, then the event can probably be cut (this, by the way, is decent advice for storytelling in general!).

You can also take the setting, if it’s particularly good, and transplant it somewhere else. Put a gripping conversation in a gripping location. This is all a part of “artistic license,” the kind of changes that good writers are supposed to make.

This may sound surprising, but readers don’t want reality when they read something that’s “based on a true story.” They think they do—but they don’t, because reality is slow, chaotic, and filled with mundane and meaningless moments.

“
Your job is to study the “true story” and extract the best conflict, the riskiest choices, and the most compelling goals/motivations to make it a good story.
Tweet this
Tweet

How about you? Have you ever experienced something that would make a great story? Let me know in the comments below!

For fifteen minutes, summarize an event that occurred in your life, or around your life, that is simply too crazy to be true and would make a great story.

Then brainstorm one major change you’d make in order to adapt it into a great story using the four steps above. Share your writing, and your change, in the practice box below and leave feedback for other writers.