5 Steps to Get Amazing Feedback From Beta Readers

Today’s guest post is by Andrew Burleson. Andrew is the creator of BetaBooks, a web app that helps authors collect and manage feedback from their readers. As a novelist and software engineer, BetaBooks was the perfect convergence of his interests. He swears that time spent building the app isn’t just procrastination from writing his next novel.

When you’ve finished a book, you feel like a hero. The work may have some warts, but it’s yours, and it’s done! The next step is to test it out on some beta readers and see how well the book works. This is called Beta Testing (or just “beta-ing”) your book. 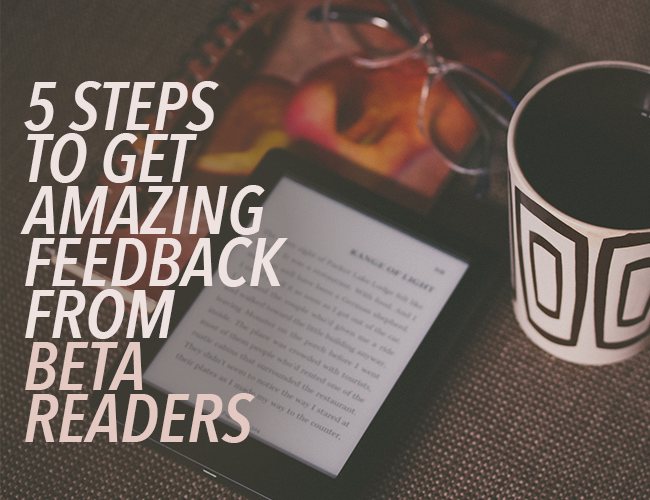 Reader feedback can teach you a lot, but it can also be hard to filter the signal from the noise. The key is learning how to process that feedback so you can make productive edits. Today I’ll teach you how I learned to do this.

5 Steps to Beta Your Book

I first tried this process on a novel I cranked out for NaNoWriMo last year. I was amazed by how much I learned, but also a bit exhausted by the effort. Being also a programmer, I started building a web app, called BetaBooks, to help automate my next two Betas. This turned out to be really helpful, so I opened it up to other authors.

Since this summer, fellow authors have beta’d more than a hundred books this way, and I’ve incorporated a lot of what they’ve taught me in this post as well.

Don’t worry, though, you can use this five-step process with any tools, even just a pen and paper.

Before you send it out, your manuscript should be clean and proofread at least once. The goal of a beta is to get a realistic reader reaction, and messy formatting and typos will take the reader out of the flow.

“
The goal of a beta read is to get a realistic reader reaction to your book.
Tweet this
Tweet

You should give your beta readers specific guidance on how to leave feedback. To keep readers in the flow, ask them just to answer a few short questions at the end of each chapter. Keep your questions short and specific as much as you can. For example:

This structure makes it easier for beta readers to give feedback, and easier for you to compare reader reactions.

As far as actually sending out your text, there are a lot of options, but I recommend against sending editable files or using inline commenting. People don’t stop to highlight typos or leave margin notes when they’re reading “normal” books. ePub files are nice because they’ll display on almost any mobile device. You can also post privately online, for example using BetaBooks or a private WordPress site.

Collecting feedback online is nice because then it’s all in one place. If you go with email, don’t leave feedback sitting in your inbox. Instead file it someplace permanent as it comes in so you know where to find it all later.

As you collect feedback, I recommend grouping it by reader and chapter, and sorting it into a few categories:

Yes, you should ignore some feedback. Sometimes one reader won’t “get” a joke, or like a scene. If nobody else feels that way and your gut says it works, ignore that comment.

“
Accept great edits, ignore ones that will hurt your book, and save your beta readers’ positive comments.
Tweet this
Tweet

Once you’ve got all your feedback collected and categorized, it’s time to decide what to do about it. Here’s how I do it:

1. Take the feedback you marked “ignore” and do just that, put it off to the side and forget about it.

2. Take the feedback you marked “keep” and put it off to the side, but keep it handy. You’ll come back to it later.

3. Take the feedback you marked “consider,” think about it, then change it to “ignore,” “keep”, or “todo.” If you can’t decide, then ignore. You’ll have plenty of work to do anyway.

4. Now you’ve got a big stack of “todos.” Read through them and notice where you see patterns. When you see a common thread, pick out those todos and line them up like a timeline from the beginning to the end of the book.

5. Look through your “keep” feedback, and if any of it relates to the thread you’ve created, insert it into the thread. Remember, you don’t want to kill the parts people love!

6. Now you have several editorial threads. Each one will naturally focus on a major idea like “the protagonist needs to be more active” or “remove that subplot.” Give each thread a label so you can keep track of it.

7. Lastly, rank these feedback threads from most compelling to least compelling. Whichever thread you think would make the biggest positive impact on your book should be first.

Now the fun part! You’ve got your feedback organized in threads, and hopefully have some great ideas for how to improve the book. Start with the thread you ranked highest, and work your way through the todos. I like to put the feedback in chronological order, work through the book from front to back, and mark each one “done” as I address it.

When you finish a thread you’ve made a substantial edit to the book, and hopefully made it a lot better. Congratulations!

You can make multiple passes this way, addressing less important threads on each pass. However, each editing pass makes old feedback less relevant, and after two or three passes it’s usually time to set the rest aside. That’s why you want to rank the threads and tackle the most impactful one first.

5. Rinse and Repeat—but not Forever

After I’ve finished a new draft I love getting another round of beta feedback. When I see a lot more positive comments, I know I’ve made progress.

There is a point of diminishing returns, though. I recommend not doing more than two beta rounds back to back. After that, if you don’t feel your book is working, it’s probably best to let it sit for a while. Go write the next book, then come back later with fresh eyes and less emotional attachment.

Running a beta is hard work, but with a good process in place you can extract a ton of value from it. This isn’t the only way to do your beta, but it’s a great framework and I’d encourage you to give it a shot. I hope you’ll find new insights into your story, and great inspiration for your next draft!

Have you ever shared your writing with beta readers? What was helpful or challenging about the experience? Let us know in the comments.

For today’s practice, you have two choices. If you’ve got notes lying around from a previous beta, try categorizing them as described above, then organizing them into threads. Do you see any new patterns, or recognize anything new? Comment below to share what you saw.

If you’re not in the beta process right now, take fifteen minutes to practice editing a piece you’ve already written. Maybe it’s a chapter of your work-in-progress, or a short story you’ve written and set aside, or a practice you’ve shared on a previous article. Pull it out, give it a re-read, and look for ways to polish it.

When you’re done, share your practice in the comments, and be sure to leave feedback for your fellow writers!

One last note: if you’re looking for beta readers, this community is a great place to find them. Share your search in the comments, and look for other writers whose books you can beta, too!