Cat Talk with Steven Pressfield, Author of “Do The Work” 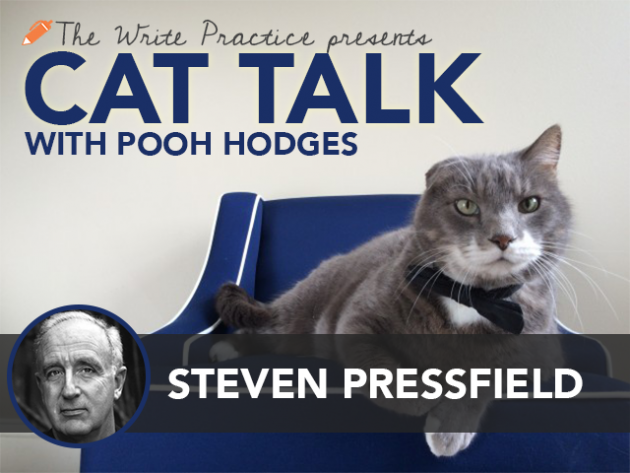 Do The Work, is written as though Steven Pressfield is your personal coach. Mr.Pressfield, or Mr. Steve, will help you from your beginning idea to the end of your project, when you finally ship. And this book is not just for humans and cats who are writers. Do The Work is for anyone who wants to fight resistance: to lose weight, start a business, dance ballet, or write a story.

I asked Mr. Steve only three questions, following the example of my typist who has interviewed Steven Pressfield before about his books, The War of Art, and Turning Pro. Both excellent books. 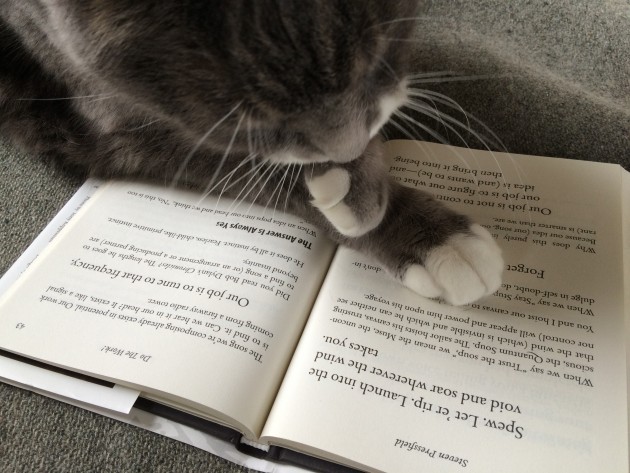 Asking Mr. Steve questions that I already know the answers to from reading his book and reading other interviews, would be like asking a genie for three bags of cat litter.

Why would I waste a question asking, “Mr. Steve, when is the best time to start?” When he says on page eighteen of Do The Work, “Start before you are ready.”

If I asked Mr. Steve if I should dawdle and take my time writing my manuscript, he could just tell me to read page thirty-seven of Do The Work. “One rule for first full working drafts: get them done ASAP. Don’t worry about quality. Act, don’t reflect. Momentum is everything.”

And if I asked him, “What is the most critical part of a project.” Mr. Steve could point me to page eighty-six. “Why does Seth Godin place so much emphasis on shipping? Because finishing is the critical part of any project. If we can’t finish all our work is for nothing.” 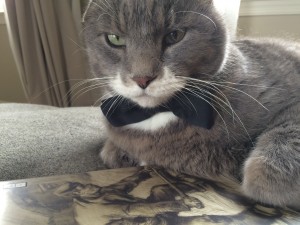 Yes. I have a time and I stick to it religiously for exactly the reason you cite: because “habit is a mighty ally” (see Twyla Tharp’s wonderful book, “The Creative Habit”) and treating writing just like a job helps to overcome Resistance. I go to the gym early each morning (another activity that elicits high levels of Resistance) and I notice that the same people are there every day at the exact same time. You can set your watch by them (and by me, because I’m the same.) They are enlisting habit to help them overcome Resistance. it works.

If you could tell a beginning writer, human or cat, one thing to encourage them. What would it be?

It took me about seven years of running away from writing before I realized what Resistance was and how it had ruined my life. During that seven years, I had a divorce, I went totally broke (blah blah etc.) In other words, the ALTERNATIVE to Doing The Work is, for me, total unhappiness and personal dissolution. Kinda like a recovering alcoholic, I know that I can’t take even one drink, i.e. sloughing off and not doing my work.

It’s kind of a negative way of looking at it, but that’s the truth for me.

A shorter way of saying it: Pooh, if you are a real writer you have no choice. You have to confront your talent or die.

On Amazon Do The Work has 512 reviews, of these, 332 are five-star reviews and 29 are one star reviews. How do you fight the fear of shipping when not every one gets your message? I would rather cough up a hairball than get a negative review.

More important: those people who gave the one-star reviews are WITHOUT DOUBT failed writers or artists themselves. They are giving that low-ball review out of pure jealousy and envy, because they have NOT done their own work. How do I know that? Because “Do The Work” may not be the greatest book in the world but for sure it is not a “one star” book. If you’ll forgive my language, Pooh, when someone posts a one-star review, they are saying “F*%k you” to the writer. Why would anyone do that? Only out of jealousy and (unconscious) self-hatred. If they were truly rating the book objectively, they might give it three stars or two, but not one.

Hope that helps. My best to Ms. Pamela. 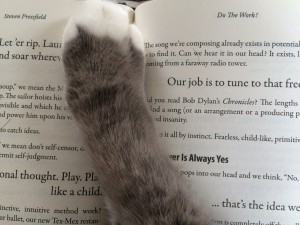 Now, Go Do the Work

Steven Pressfield is a warrior.  In his book Do The Work, Mr. Steve gives us the weapons we need to fight and slay our own dragons. Create, Finish, and Ship.

If I lived closer to Mr. Steve I would bring him a mouse.

I know Mr. Pressfield doesn’t read reviews. But, please let me tell you, my dear friends. I  give this book a five mouse rating. If you want to finish what you started, read Do The Work, and then, do the work. 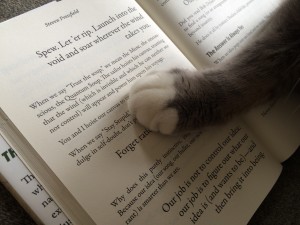 For practice today please continue writing on a project you are having trouble finishing. If I could, I would come over and help you fight resistance. But, this is one battle you have to fight on your own. I will cheer you on! You can do it! Keep working on it, don’t give up!

Write for fifteen minutes then share your story here in the comments section.

Please be kind and read someone else’s story and make a comment. Let us encourage each another to do the work.

All my best,
xo
Love Pooh 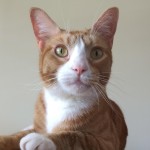 Pooh Hodges is the cat who writes. He is an author, an entrepreneur and a visionary. He dictates to his typist every morning before he takes a nap in a sunbeam. He is currently writing his memoir, a tragic tale of loss and redemption.
Pooh would love to be your friend and he would love to connect with you on his blog, thecatwhowrites.com