Live a Story. Then Write It Well.

This guest post is written by Kellen Gorbett. Kellen is a journalist and world traveller. He writes at kellengorbett.com. Check it out.

One of my favorite pastimes is discovering real-life situations that, if seen in a fiction story, I would find totally unbelievable. 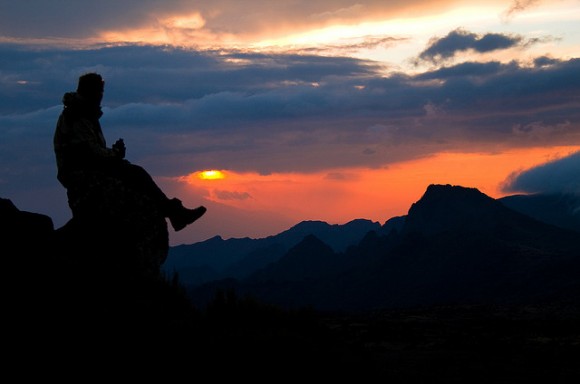 The view from Mount Kilimanjaro. Photo by Stig Nygaard

I most often recognize scenarios like these in ridiculous situations and with strange people. Recently, I attended a New Year’s Eve wedding. At the reception, while everyone was on the floor dancing to ‘Shout’, I was trapped in a corner with one of the bride’s strange cousins. I was without an exit strategy and deep in a one-sided conversation. The wedding was in a nice barn in the woods of Tennessee. This, naturally, fueled a conversation about Sasquatch.

One thing led to another, and soon I was hearing about UFO’s over dance music, and that if we are alone, the universe sure seems like an awful waste of space – a quote I recognized from the mid-1990s movie, Contact. The conversation ended when he listed off the other things he’s suspicious about. “Nessie and Banshee, Mermaids and Dwarves and Tasmanian Devils,” he said. “I think there’s a good chance they’re all real.” I walked away before the conversation could get to bears, beets and Battlestar Galactica.

While the comedic side to this concept is very entertaining, there’s another side I’ve been thinking about. It’s to do with our world view, whether fantastic or monotonous, and it’s to do with the notion of how writers write and how writers live.

Just from the perspective of a storyteller, I sometimes wonder if fiction is, well, an unnecessary endeavor. Before you burn me at the stake, or worse, never read another word of my writing, know that I love fiction. Of course I love fiction; it’s the beauty of creation. Life out of nothing. All I mean is this – Is there a story playing out right now, so epic, heart-wrenching and heroic, it could be the greatest ever written, if there was someone to write it?

British playwright, novelist, short story writer and the man George Orwell referred to as his biggest influence, Somerset Maugham, believed in the drama of life. “Truth is not only stranger than fiction, it is more telling,” he said. “To know that a thing actually happened gives it a poignancy, touches a chord which  a piece of acknowledged fiction misses.”

As writers, we owe it to our audience to live fully. There’s something about sitting at our desk and not making it past the refrigerator while writing tales of great journeys and adventures that just seems wrong. It feels like cheating.

Ernest Hemingway is one of the most discussed and debated writers of the 21st century. While much of his writing was undoubtedly influential, the names of other, greater writers do not live on like the name Hemingway. He lives on in legend and lore because he wasn’t just writing his story. He was doing his story. Fishing in Cuba (To Have and Have Not) and hunting in the Serengeti (Snows of Kilimanjaro), the Spanish rebels (A Farewell to Arms) and the artists of Paris (The Sun Also Rises), he lived out a story that most could only dream.

Here are three ways to live a story worthy life.

People are simply the most interesting subject we have to write. Behaviors, cultures, opinions, reactions, personalities, worldviews, and communication, there are several books worth of stories concealed in the life of just one man.

A writer is an observer, an investigator. The more lives you’re allowed into, the more options you’ll have for characters, and the deeper your relationships are, the more complex and real these characters will be. And the more relationships you touch, the better your life will be.

A writer can have an incredible concept for a storyline, but without a good backdrop, the plot will suffer. I live in Nashville, Tennessee, and can write stories all day about mud-kickin’ cowboys and guitar playing southern belles, but if I never left Nashville, my subjects would be limited to this.

It would be ill-advised for me to write an adventure on freeing human trafficking victims in Southeast Asia, a romance novel in Paris, or a drama about tango dancers in Argentina, if the only thing I knew about those cultures is what I heard about second hand.

3. Live More than You Write

Your writing is your craft, your hobby, your release, and your skill. Confusing your writing with your identity will, in the end, cause your craft to suffer, and it will not bode well for your life, either. Hemingway said, “There is nothing to writing. All you do is sit down at your typewriter and bleed.” Sure, I get that. But, honestly, that doesn’t sound too enjoyable, and while his writing was great, his life didn’t end especially great.

So live out a story, and then write it well. If, tomorrow, the Greatest Story were to come and go without ever being heard, ever being written or told, sure seems like an awful waste of space.

How about you? How do you think you live a good story?

Write about the greatest story in your life. Focus on the rich details you have the benefit of knowing from actually doing the story. Write for fifteen minutes. When your time is up, post your practice in the comments section. And if you post, be sure to comment on a few practices by other readers.