Meeting the Mentor: A Vital Moment in Every Hero’s Journey Story

Great stories are filled with great characters. One of the most common characters in any story is the Mentor, an essential character if you're writing a Hero's Journey story. In fact, the fourth step of the Hero's Journey is Meeting the Mentor. Who is your hero's mentor, and how do they challenge them? 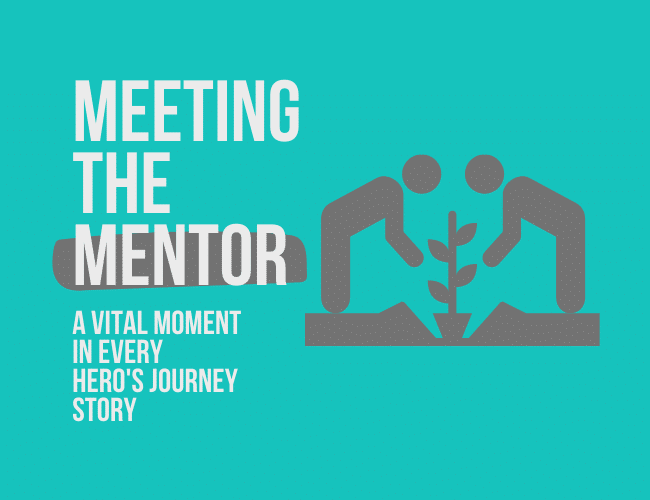 As you may know, the Hero's Journey is an archetypal story theorized by Joseph Campbell in his book The Hero With a Thousand Faces. And in practically every heroic story, there is a character that helps the hero rise from nobody to a somebody.

Getting that character right can be the difference between writing a story that readers love and one they put down and forget.

Here's a basic definition of this widely-used part of a heroic story:

Meeting the mentor occurs after the hero has been Called to Adventure and discovered that the task ahead will be incredibly difficult. The Mentor then provides the hero with training (physical, mental, spiritual, or a combination thereof) and often accompanies the hero on the journey.

The mentor is frequently an older, “wiser” character no longer able to fulfill the heroic role on their own.

Why Do Stories Need Mentors?

In my last article on the Hero's Journey, we learned how heroic stories begin. They start with conflict either from within or without that upsets the peace they enjoy (Step 2: Call to Action).

This conflict is almost always so overwhelming that the hero doesn't want to rise to the challenge. It's just too much. The next step, the Refusal of the Call, connects the reader to the protagonist. “I'm just like them,” the reader might think.

For the hero to rise above his common state, he's going to need help.

That's where the Mentor shows up: Step #4, Meeting the Mentor.

“
Every hero needs a mentor. That's why Meeting the Mentor is such an important step in The Hero's Journey. Learn more about this vital moment in this article!
Tweet this
Tweet

What Does a Mentor Do?

Mentors exist to pass on knowledge and teach skill. They usually exhibit an intriguing balance between physical skill and existential knowledge, like Morpheus in The Matrix (who fights Neo while teaching him the nature of the Matrix) or Dumbledore (who teaches Harry about the power of love while standing up to Voldemort's most powerful magic throughout the Harry Potter books).

Mentors are at their best when they push the hero out of their comfort zone. Mentors don't coddle. They are often tough to the point of seeming villainous.

Take Haymitch Abernathy from The Hunger Games. Prickly and standoffish at first, Haymitch is resistant to his role as the potential mentor to two more District 12 children who are about to die. After years of death and loss, he resists the mentor relationship because it hurts too much.

Yet after witnessing Katniss and Peta's resolve to survive and even win the Games, Haymitch gives in and begins providing valuable leadership advice, offering invaluable tidbits of constructive feedback as Katniss trains, impresses the judges, and wins the love of the Capitol audience.

Or take an example from science-fantasy, Star Wars. Obi-Wan Kenobi is typical of mentor symbols in literature: he is old, wise, bearded, and filled with zen-inspired advice. He tells satisfying stories about the “old days” and gives gentle, constructive criticism of Luke as he learns the ways of the force. He even fulfills a common role as he delivers Luke's first symbolic archetype, a piece of magical equipment called the lightsaber.

The Fate of the Mentor

The mentor's role is a fateful one.

Think about it: The mentor is the character with abounding knowledge and skill. Why, then, are they not the hero?

Most Hero's Journey stories are about young protagonists who come of age as they progress on their journey. Luke Skywalker. Harry Potter. Katniss Everdeen. Even stories like The Odyssey and The Lord of the Rings, which feature middle-aged protagonists, have Mentor characters who are much older and wiser than their heroes.

In order for the heroic journey to work in other words, for the hero to be the one who faces down the ultimate evil the mentor cannot be there to help. They must be sidelined somehow.

And that usually means death.

It's noteable that the mentor's death is rarely permanent, at least in a spiritual sense. Practically every dead mentor finds a way to come back and assist the hero, at least in spirit. Dumbledore, Mufasa, Obi-Wan Kenobi: All of these Mentors “die,” but their spirits live on, continuing the mentor-mentee relationship from the stars, the afterlife, or something like it.

Other mentors may not die but are sidelined, unable to contribute in a very meaningful way. Haymitch cannot enter the arena and directly contend on Katniss's behalf in the Hunger Games, so he must somehow keep up his successful mentoring relationship from a great distance. He does this through his strong relationships with Capitol insiders who buy Katniss gifts, allowing him to send notes with cryptic mentoring advice.

Finally, there are those mentors who bite the dust forever, and are never heard from again. These deaths usually happen when the stakes are highest and the death is meant to symbolize the cruelty of the antagonist. While Haymitch gets to live, Cinna (Katniss's stylist) does not, meeting an invisible and likely gruesome end.

Ultimately, it's up to you. But make sure your hero is put to the ultimate test without the safety net of their mentor. Otherwise the stakes won't be nearly high and exciting enough.

5 Key Types of Mentors in Stories

There is no shortage of approaches you can take to the mentor character. The trick is to avoid falling into the cliché trap, repeating what others have done before you.

What follows is a list of existing mentor types and suggestions for how to innovate. Because the only way to truly thrill your reader is to use a familiar trope in a new and innovative way.

Some mentors appear to lead the hero through dangerous, unfamiliar territory. Gandalf serves this purpose (at least for a while) in The Fellowship of the Ring, and Dumbledore in the Harry Potter books.

How to Innovate: Consider limiting your mentor's knowledge of the terrain or history. Maybe they know more about things that aren't immediately relevant, but will come into play later. Make the mentor's wisdom seem foolish . . . at first.

So many stories feature a mentor as a Trainer. Usually the mentor is a former hero who failed, or suffered an injury that prevented them from success. This can easily veer into cliché, though, so try to avoid depending on this hidden information for an emotional punch.

How to Innovate: Disguise the purpose of the lesson. Most people love learning by doing, and your reader will turn pages like a madman if he or she can't immediately figure out why the mentor is doing what they are doing.

A frequent role in comedies and coming-of-age stories, the parental mentor is a more loving role than traditional mentor characters, entering into a uniquely emotional relationship with the mentee. They often function also as authority figures and foils with whom the hero conflicts as he or she searches for identity in the new world.

A recent example of this is the relationship between Tony Stark and Peter Parker in Spiderman: Homecoming. While Stark isn't Parker's actual father, he functions as one, providing Peter with lessons in wisdom that guide him to true heroism.

How to Innovate: Some stories innovate this version of the archetype by creating non-blood familial bonds, like foster or adopted parents, uncles and aunts, cousins, and more. “Family” is a buzz word in many stories nowadays (The Fast and the Furious), and many storytellings are finding ways to explore the infinite, non-traditional forms of “family.” Your story can, too.

Just as a hero needs physical training and guidance, he also needs spiritual leadership. All heroic journeys are dual in nature, in that an emotional or spiritual journey parallels the physical one. Many mentors function as guides on that spiritual path.

It's rare that a mentor is solely a spiritual one (usually he/she provides additional training in other areas). But some, such as Grandmother Willow in Disney's Pocahontas, serve in this role. Such a mentor is usually physically frail or delicate while being spiritually mature, achieving a symbolic balance.

How to Innovate: Since this archetype has its roots in religion, it can be refreshing to shed some of the religious imagery, such as robes, shaved heads, and other symbols of various faiths associated with spiritualism. Consider crafting your spiritual mentor out of an unlikely figure, someone of whom little spirituality is expected.

Finally, mentors often function as casual sources of knowledge and inspiration. They are like companion characters (known as Loyal Retainers), but don't come along for the journey. These characters often appear briefly and serve their purpose episodically.

Such a character is Hagrid, Caretaker and Keeper of Keys at Hogwarts. Hagrid is actually in the books and movies quite infrequently. His purpose is almost entirely plot-related with few exceptions. He exists to provide Harry and the other students with information that gets them famously into trouble.

How to Innovate: Try giving this character a stake in the story: in other words, give them something to lose. Sometimes the biggest problem with mentor characters is that they don't stand to lose anything and only serve as plot-filler. Find meaningful ways to connect them to the conflict and you'll have a character that readers deeply care about!

We All Need a Mentor

Few heroes can rise to the challenge without some form of guidance. That's why your story needs a Mentor.

Thankfully, this is true of life. Practically no one rises to prominence without a significant investment from a mentor who cares enough to invest time and energy in that person's success.

Try innovating your next story's mentor. How will you fulfill this common reader expectation in new and exciting ways?

Who is your favorite mentor character in a book or movie? What do you love about them? Let us know in the comments.

Freewrite a scene in which a hero meets their mentor, building off one of the mentor archetypes from above. Choose one of the following:

In your Practice, don't worry about where the adventure will go or about crafting the perfect goal or stakes. Instead, focus on the hero's weakness and unwillingness to move toward the challenges ahead. How will the mentor encourage and prepare the hero for greater things?

Spend fifteen minutes freewriting your Practice in the box below. When you're done, be sure to leave a constructive critique on another writer's submission!