How to Organize Writing Feedback so You Can Rewrite With Confidence

If you're a writer, you've probably received feedback. While some writing feedback is easily processed (like quick compliments), the best feedback takes time and energy to deal with. 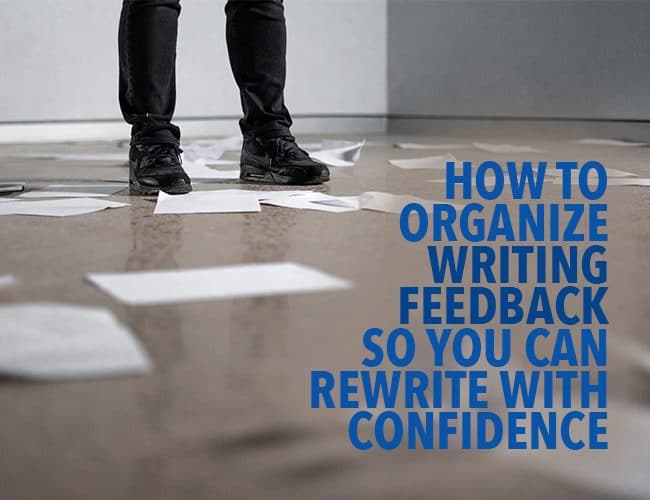 This is the kind of writing feedback we give and receive in our premium writing community, The Write Practice Pro, by the way!

Receiving a flood of critiques can feel good at first. But after reading a deluge of opinions and observations and judgments, it can get really overwhelming.

Here's how to organize the feedback you receive so you can approach the next draft with confidence!

How to Organize Writing Feedback

Writing and revising use different sides of your brain. One is creative, explorative, and free — the right side. The other is analytical and critical — the left.

Similarly, you should separate the documents you use to create and critique.

If you're using Scrivener, you can just create a separate folder for feedback.

The point is to separate the feedback, and any notes you take on it (more on that later!), into a separate document than your manuscript.

Not all writing feedback serves the same purpose. Nor is it all targeted in the same direction.

Yet we receive it that way. Anything constructive tends to feel negative or critical. Anything positive is encouraging. And so on.

But this doesn't help you build an action plan for revising your story. Instead, you need to segment your feedback based on the specific area of creation it affects.

In your feedback document, you need to create three sub-sections with the following titles: Story, Style, and Surface.

Here's what each of these means, and what you need to do with it.

Without a doubt the most important writing feedback you'll receive, Story Feedback concerns the choices you've made that pertain to the story: Characters and characterization; character choices; stakes and what's at risk; setting choice; plot holes and logic; whether your genre is clear or not.

Let's not mince words here. These are major issues to resolve.

When you receive feedback on any of these things, it's imperative to document it (use your device's Copy-and-Paste functionality to grab any written feedback and post it in your Feedback Document) and sort it into your Story Feedback sub-section.

When you receive story-based feedback about any of these things, value it. Put your ego aside. I know it hurts — I've received more than my fair share of humbling feedback.

But it's more valuable than a diamond. Any reader who gives you this feedback truly cares about your success as a writer, and by proxy, the experience of your readers. Treasure these readers and the Story Feedback they give you by organizing it and making it your top revision priority.

“
Feedback on your story is a gift. It means people care about your writing and want to help you be successful.
Tweet this
Tweet

The second kind of writing feedback you're likely to receive is Style Feedback.

This usually pertains to how you handle things like characterization, setting description, dialogue, pacing, or other issues of style that concern your critique partner's personal preferences.

This gets tricky because Style Feedback is just that: Feedback on how you create stories. The instinct to get defensive is strong, and there are times when you will actually be right (or your partner might be wrong).

You still need to document and consider this feedback . . . even if it hurts.

Since style is so personal, this is where we tend to fight to the death over trivial matters like word choice or a particular way of crafting dialogue. They are the little stylistic hills we are delighted to die on because we are in love with our own voices.

But a humble writer is a growing writer, and to become the kind of writer who attracts readers like J.K. Rowling, you'll need to be willing to make stylistic adjustments for the sake of your readers.

Here's a three-step process for handling stylistic feedback that will rarely let you down:

A good example here is the use of cursing. Many readers simply don't enjoy foul language of any kind. It is an immediate turn-off, and no matter how good your story is they won't finish it.

This was true for me when I read the first page of American Psycho — it was so profane that I had no desire to continue. And I proudly filled my own first novel with dozens of F-bombs!

Again, humility saves the day here. Are you “wrong” for using curse words or any other stylistic choice?

But you may not be enjoyable or welcoming or comfortable. And these are things that readers crave.

So take each piece of Style Feedback with a grain of humble salt because it could save your writing life (and make you a pretty penny in sales someday!).

The final kind of writing feedback you'll receive is the kind you probably got from your high school English teacher: Surface Feedback.

This has everything to do with the Grammar Nazis' laws of grammar: Spelling, punctuation, syntax, and other so-called “rules,” like not beginning a sentence with a conjunction or ending one with a preposition.

And that's not all they'll come up with!

As a high school English teacher myself, I've heard of a zillion rules that actually aren't rules… and they're paralyzing young writers.

The truth is, many of these rules aren't actually rules, but personal preferences. And you deserve the freedom to tinker with language in order to tell the story you want to tell.

As we just discussed in Style Feedback, it's important to tell a story that is welcoming and comfortable for your reader. That means following the rules of grammar to the best of your ability.

As a former judge of several writing contests here at The Write Practice, I can testify that poor grammar has disqualified several entries.

Let me put that in laymen's terms for you: If you suck at grammar, then you won't make sense and people won't respect you. It's just that simple.

Plus, when you are good at grammar, most folks won't notice when you break one of the little stylistic rules that your old English teacher clung to for dear life. They'll be too absorbed by your thrilling story and voice to care.

So take notes on Surface Feedback. Take that feedback seriously.

But don't make it your first priority. You'll get to it — after all, it's probably the fastest and easiest thing to get to — but not yet.

Hit the story first, then your style. Those things matter most of all!

It's a blessing to receive a lot of writing feedback. Yet it can become a curse when that feedback seems too plentiful.

Thankfully, now you have a method to organize that feedback into meaningful sub-sections. Now you can approach your future drafts with clarity, purpose, and confidence.

Commit to organizing your feedback with a Feedback Document that uses three sub-sections: Story, Style, and Surface. Your rewriting will be energized and targeted at what readers what and need!

What do you do with feedback on your writing? Let us know in the comments.

For today's practice, you have two choices:

Have you received feedback on your writing recently? Now is your chance to process it. Is it Story, Style, or Surface Feedback? What changes will you integrate into your story? Take fifteen minutes to review your feedback and edit your story, then share your revision in the comments.

Don't have feedback yet? This is your chance to get some! Take fifteen minutes to write a new story based on this prompt:

If she could only find a pair of scissors, this would be so much easier.

When you're done, share your story in the comments below to get feedback from the community. Be sure to read three other writers' pieces and give them feedback, too!