5 Reasons Reporters Make Good Writers… Most of the Time ­

This guest post is by Brennan Reid. Brennan is an aspiring author with two novels set to launch in late April. Follow his blog, brennanreid.com, to read his thoughts on writing as a craft, self-publishing, and marketing. Thanks so much, Brennan!

Leads, nut grafs, and the infamous six W's—who/what/when/where/why and how—set the everyday newsflash apart from creative work. Or do they? 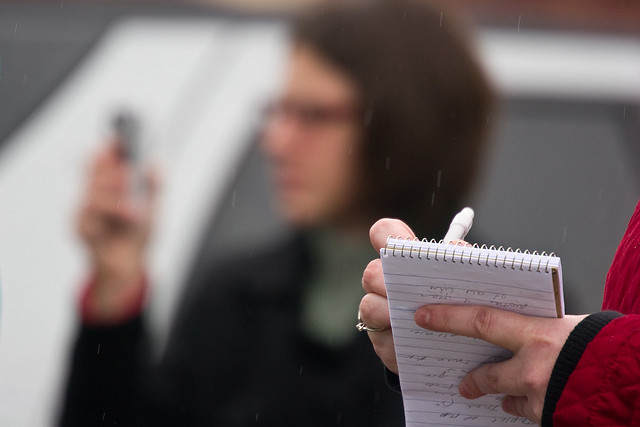 Let’s look at a comparison:

Today in St. Louis, MO, this blogger found himself struggling to develop a journalistically inclined example of newsflash writing for readers. In this blog, he will provide evidence that supports reporter-style writing and why it’s an effective tool for authors and accepted by readers.

I’ve always struggled starting stories. I ask myself, “What’s the most important thing about my character? How can I make an opening memorable, worthwhile, and lead readers onto the next paragraph?” My background is in journalism, a profession I landed on accident and never officially studied (my BFA argued otherwise). But as a current freelancer and lifelong reader, I’ve come to learn that opening stories and chapters with meaty information is the most effective way to A) Write concisely, B) Plan the flow, and C) Set the scene and action for readers.

Effectively, both openings say the same thing with varying levels of detail.

What Can Writers Learn from Reporters

But as an author, reporter, or everyday writing enthusiast, how can you post up the details front and center and retain the entertaining prose that sets it apart from obituaries and high school basketball game recaps?

It’s hard to read a newsflash and not get a sense of where we are. The same needs to be said for creative work.

I struggled with this while writing my current soon-to-be-self-published projects. I kept trying to hide, tease, and ensnare my readers (a pair of editors). Ultimately, my goal was to trick them for the “oh” moment. The “oh” moment never came.

A narrative story differs from other art forms because there is nothing to look at. Unless you’re e e cummings, of course, and write calligrams (don’t). It’s up to the first lines in every chapter, section, and scene to illustrate where we are so us readers can put semantics over the syntax, watch characters move, and visualize the happenings. Reporters are great at this.

This isn’t Victorian England and no one much cares to read lengthy, semi-colon heavy prose that loops around and around until the eventual, final period closes out a statement, comment, thought, and hopeful point.

Take a page from Hemmingway and say what you can in the simplest way possible. Reporters, or at least reporters from a certain pre-web era, were concerned with inches and word counts. While many of us would undoubtedly break down if some divinity cut out the last few paragraphs of a story because “It took up too much room,” it’s usually in a reader’s best interests to keep it short.

It’s like a long, overtly complex algebraic equation chiseled down to a simple arithmetic problem. Readers are more likely to interpret and visualize how your characters dance through scenes when words, sentences, and paragraphs are straight forward. Leave “trying to impress” to love letters, dear poets.

3. Reporters Get the Facts

A trained reporter will report the facts. Between these “according to him at here near this time when this happened” statements, or attributions, are quotes. The quotes are seldom the most interesting thing about news articles, unfortunately, and that’s because a 200-word report on a car accident is written in exactly five minutes.

Reporters can’t invent what people say but they do have license to ask, “Can you rephrase that for me? What about your tears and what did it smell like?” Do they? Not often, but they should. This is called leading an interviewee and it may or may not be ethical? As mentioned, I never did take a class on reporting.

Anyway, a novelist or creative writer has the only authority over who says what and what scenes are seen on screen (the text). The facts still need to be there, of course, and it’s the in-between that holds back an amazing story.

The facts need to be relevant, tied together in a progressive matter, and reflected upon by characters. It’s like writing a news brief on some conceptual plot thought up in your head.

Authors are observers. It’s up to you how to tell your story, though reporters have to keep them highly objective and removed from any sense of personality. There are exceptions, however, several that stand out from my experiences being a journalist and reading award-winning stories.

It’s the odd, beautifully exact details that transmute boring black and white text into a crafty, fact-filled story. Most editors love cutting a reporter’s most proud work which is just something we deal with, but that doesn’t mean it’s not worth giving it a try.

As an example, two years ago I was doing a house-mom magazine story on a vintage record store in Indiana. I had a bit more creative freedom but I still had to keep an objective point of view. Know what I did? I asked my characters (interviewees) extremely off-the-wall questions to capture the essence of their little shop.

How do I spell your last names? Is that dust I smell? What color is that wallpaper? What are the terms of the lease? Can you tell me more about the wallpaper? How hot do you think it is?

Did I bug them? Absolutely. But the store was so obscure it was a challenge to figure out A) What it was, B) Why anyone would care, and C) If it was worth my time. So now I had my objective facts reported to me by other people. They were then usable in the story’s lead. This brings us to the next point.

Writers, reporters, and storytellers are just really literate shoplifters. We find details, take them, write them down, use them. The most rewarding part about my time journalisming is meeting people and absolutely using them in my creative work. No, I’m not saying I use names, places, or actual events. But the best writers are on the ground-level and learn how to create characters and situations by being around characters and getting into situations.

The Imminent “Most of the Time”

The headline says “Most of the Time,” so now for the warning I give writers who do too much reporting as opposed to storytelling (a topic for another day):

Without your (or your projected) interjections, “prosey” descriptions, details, and internal dialogues, no one will be interested in your story. This doesn’t necessarily include nonfiction, of course, as there are countless examples of step-by-step, deliberately-written and factual successes out there.

Reporting, no matter how boring the subject matter, is an opportunity to turn the mundane into something worthwhile.

Do you think reporters make good creative writers? What do you think writers can learn from journalists?

Report a fictional scene. Start with the who, what, when, where, and why lead then lay out the plot/premise in the second paragraph. The scene should be told from an objective point of view and the 300 or so remaining words should be prioritized to report the most important actions first.

When you're finished, post your practice in the comments section. And if you post, be sure to leave feedback for a few other fellow reporters… er… I mean writers.