Writing to Change the World Just Because We Can

This guest post is written by Kellen Gorbett. Kellen is a journalist and world traveller. He writes at kellengorbett.com. Check it out.

It's said that when Harriet Beecher Stowe visited the White House to meet President Lincoln, he looked at her and said, “So, you are the little woman who wrote the book that started this Great War.” 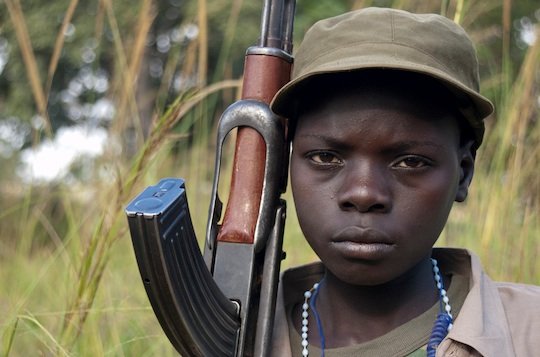 All writers want their work to have influence. I wanted my writing to move people, evoke emotions in them, and, most of all, call them to action, but I didn’t believe it was possible. Before I could believe, I needed to find the answers to a couple questions.

Stowe’s writing can start a war to end slavery, but what can my writing start? How do I write to start a change?

I had first considered the weight of influence from great writers, while reading A Long Way Gone, the novel of a 12-year-old’s devastating journey as a child soldier in Sierra Leone. As I read, I thought of all the statistics I had seen on child soldiers, I stopped reading and set down the book.  No matter how large the statistics grew, I would do little to help. It was just a number.

The commercials were there, too, and I played them in my head, the soft song, the flies and mud and dirty water, the white man begging me to help. It didn’t matter how cute they made those little African babies, or how many flies and dirt you put around their malnourished bodies, their method of persuasion wouldn't affect me.

But A Long Way Gone showed me good writers can influence change more than statistics or even heartbreaking images.

I continued to ponder the potential impact of good writing, and I thought about why we write – the purpose of story. There had to be a simple answer to a fairly common question. The definition asserted that a story is designed to interest, amuse or instruct.

This answer was correct, and it was adequate, but I knew there was a greater answer here. A great answer, one that would reveal why writers give their lives to writing, searching, developing, re-writing and discovering, all for the art of story.

I picked up my book and kept reading. I read of villages burned, children forced to murder their parents, and the young boy, the one I had come to know in the first few chapters, I read of his capture by rebels, and I finally knew the answer to story’s true purpose. It was easy, the same answer as life’s true purpose.

Amusing, instructing and keeping interest is important in writing and important in life, but the most significant and influential act we do in life is create and build relationships. It changes the world. As writers, we create relationships for our readers with each character we write and each new story we tell. It’s the best part of writing.

Here are a few tragic facts and numbers about child soldiers.

Here is an excerpt from Ishmael Beah, the 12-year-old boy with his friends, in A Long Way Gone.

We walked with him, his feet dragging on the ground. His arms were cold. His body was still sweating and he continued bleeding. We didn’t say a word to each other. We all knew what had happened. When we finally got to the wahlee, Gasemu’s eyes were still open. Alhaji closed them. I sat by him. His blood was on my palm and my wrist. I regretted hitting him with the pestle. The dry blood was still in his nose. I began to cry softly. I couldn’t cry as much as I wanted to.

A good friend and writer told me this week, “Statistics and widespread reports of injustice are necessary to get a big picture scope of what’s going on in the world, but they paralyze even the most well-intentioned people into inaction.”

Relationships appeal to the heart. Personal stories from a character the reader has invested in calls to action. Harriet Beecher Stowe made slavery intimate. Once readers were involved in the lives of Uncle Tom, Eliza, Eva and the other characters, slavery was no longer a distant statistic. There was a call to action, and then, the world changed.

Do you believe your writing has the power to change something? Are you writing to make that change?

Use a need in the world that you’re passionate about meeting, and then use intimate characters to draw the reader into desiring to meet that need, too. Whether a real character or imagined, take the reader to where they are, what they’re feeling and thinking.

Write for fifteen minutes and post your practice in the comments. Don’t forget to check out the work of your fellow writers.

Also, check out this video where Ishmael Bey talks about his writing process.