7 Lies About Becoming a Writer That You Probably Believe 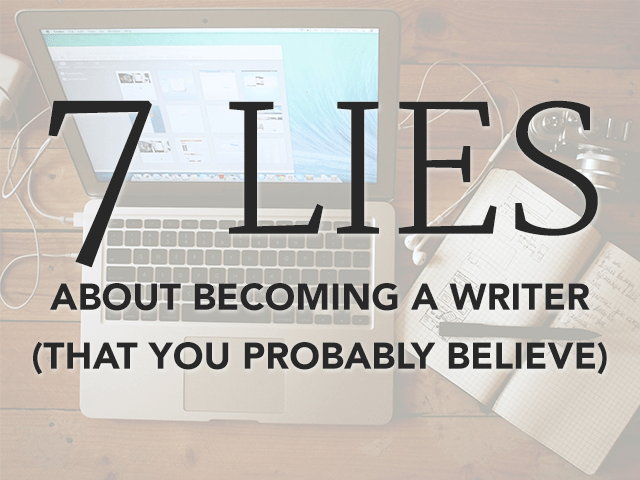 Depending on who you listen to, becoming a writer is either the easiest thing in the world (“Just write!”) or a proposition so impossibly difficult that only a combination of talent approaching genius, luck, and years of expensive training (i.e. “Get an MFA!”) can turn your writerly dream into reality.

Lie #1: You have to be inspired to become a writer.

Many writing blogs and even books say that you have to be inspired to write. They give endless suggestions for helping you get inspired, from changing your location to reading inspirational writing to  listening to music.

However, while inspiration is always nice, the pros agree that you should never wait for inspiration to start writing.

Amateurs sit and wait for inspiration, the rest of us just get up and go to work.
― Stephen King

Lie #2: You have to be a grammar expert to become a writer.

A few years ago I was part of a writer’s group where a woman brought a piece that was so littered with comma splices and other grammar mistakes that it was impossible not to feel sorry for her. “Shame,” I thought. “Her novel was actually pretty good.”

Then, I found out this same woman had already published eight books, all with traditional publishers. That’s when I learned a very important lesson:

You don’t need to be an expert at grammar to be a writer. That’s what editors are for. (Share that on Twitter?)

I’ve worked as an editor, and I’ve personally seen writers who are truly horrible at grammar and yet have published books that have been read by hundreds of thousands of people. Having good grammar skills is nice, but it’s just not a requirement to be a writer.

Lie #3: You have to be an introvert to become a writer.

Some people believe that you have to be an introvert to be a writer. They say that extroverts need to be around people too much to be able to handle the solitary job of being a writer.

The reality is that you do have to be able to spend many hours alone to be a writer, but that never stopped many extroverts from becoming writers.

As I’ve read the biographies of well-known writers and interacted with professional writers myself, I’ve found that writers come in all personality types.

For example, while Ernest Hemingway was very disciplined about his writing, he regularly spent half of his work time networking with writers he admired. Mark Twain often complained about how easily he became distracted from his writing to pen letters to his friends. And no one could say that Byron was an introvert.

When I talk to friends and family who aren’t writers, I find that many of them have this idea that if you’re a bestselling author you’ve “made it.” You can then retire to your island and live a life of ease.

The reality is that most writers, even bestselling writers, can’t make a living off of their books. Not even close. (Share that on Twitter?)

The way that (traditional) publishing works is that you make $1 to $2 for every paperback book you sell. That means that if it takes you five years to write your book and you sell 100,000 copies, you’ve only made $20,000 a year. (Of course, the truth is that the average book sells nowhere near 100,000 copies.)

Instead, most full-time writers make a living in one of two ways: they do public speaking or they teach.

Mark Twain, for example, was so deep in debt that he went on a yearlong speaking tour around the world to pay off his creditors.

Today, popular authors like Michael Cunningham and T.C. Boyle teach creative writing at universities to earn a living, and while Malcolm Gladwell, the bestselling non-fiction author of The Tipping Point, may what you and I would call a good living from his books, it’s nowhere near the $80,000 he gets every time he speaks.

The reality is that bestselling writers often do make good money, but rarely just from their writing, that’s why it’s so important to cultivate multiple income sources if you want to become a full-time writer.

Lie #5: Finishing your book is the hardest part to becoming a writer.

The writers I talk to often think that as soon as they publish their first book, everyone will instantly see how great it is and rush out to buy it. They think when they tell people, “I’m a published author,” at dinner parties and events people will genuflect to them, praising them as superior beings.

However, while most people are somewhat impressed when you tell them you’re a writer, very few of them care enough to go out and buy your book. In fact, I’ve found that the most disappointed writers I know aren’t the ones struggling to finish their first book. Instead, it’s the published writers who are most disappointed.

The reality is that when you finish your book, that’s just the beginning to becoming a writer (Share that on Twitter?).

Then you have to try to get an agent for it, then a publisher. Then, you have to build your platform and market it, not to mention, write your next book. The truth is that after you write your book, you still have a long way to go. (Sorry!)

Lie #6: You should be a writer because you have good ideas.

I know you have a great idea for a novel. You may even have dozens of them.

It doesn’t matter how many great book ideas you have if you can’t finish your book. (Share that on Twitter?) That may sound harsh, but it’s the truth.

Don’t believe me? Here’s George R.R. Martin on the subject:

Ideas are cheap. I have more ideas now than I could ever write up. To my mind, it’s the execution that is all-important. I’m proud of my work, but I don’t know if I’d ever claim it’s enormously original.

Lie #7: You could never make it as a writer.

If you’ve read this far, you may be thinking, “If this is all true, I could never make it as a writer.”

When I was in high school, I decided I wanted to be a writer. It was one of those childhood fantasies, of course, but I was serious. I studied writing in college, and afterward I got a freelancing job at a small local paper. Later, I spent a year traveling the world, working on my writing craft while living in Kenya, Thailand, and Vietnam. When I got back, I helped a mentor with his book for free, a job that unexpectedly led to my first ghostwriting job.

Since then, I’ve d0ne nearly every writing job in the industry, some of them more fun than others, from writing articles for magazines to editing to designing books. However, I can now say, twelve years later, that I earned my dream.  It took long hours and several years of horrible pay, but I’m now a full-time writer.

You can make it as a writer. I promise. It might not look like what you thought it would, but it’s very possible. Don’t get discouraged. Instead, get busy.
How about you? What lies do you think people believe about becoming a writer? Share in the comments section.

Don’t be an amateur and wait for inspiration. Start writing now!

Today, spend some time free writing or working on your work in progress. Write for fifteen minutes. When you’re finished, share your practice with the community in the comments section. And if you share, please be sure to leave feedback for your fellow writers!