The window in my living room opens out to a wide field that ends in a line of trees. The birds live in the trees and in the mornings they fly out over the field.

There's something about birds. 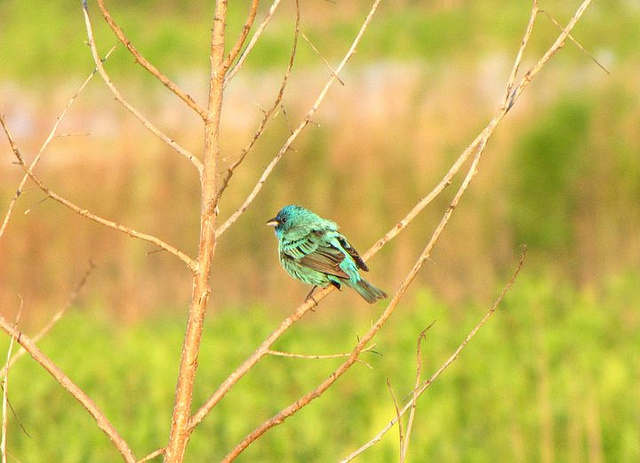 Sometimes you see a yellow one or a blue one. Mostly, though, they are shades of white and brown. I watch as two white birds chase each other, loop around, and fly out of my view.

Some people spend hours and days watching birds. I imagine it sharpens their senses. Their eyes learn to pick out flashes of movement in the overwhelming green of the canopy. Their ears learn the distinct song of each bird.

I, however, am content to watch the field from my living room window, and if a bird flies through my view, so be it.

Bunting is what you do in baseball (as I have heard all my life). It is that red, white, and blue half-circle of fabric they put up to play patriotic. It is also a family of birds.

My instinct tells me birds feel like hope and joy and a oneness with nature that I've experienced only a few times. They are also synonymous for my soul.

And once, I wrote about a bird in a story and was shocked at how much the bird, my “character,” moved me. Just now, a yellow bird flew the whole length of my window.

What do birds mean to you?

Birds can add a touch of detail that lights up your writing with life.

Practice writing about birds. If it would help, go outside with a notebook and a pen and look for them. They're everywhere.

As you describe them, think about what they communicate subconsciously.

Write for fifteen minutes. Post your “bird watching” in the comments.