3 Common Mistakes Writers Make (And How to Avoid Them)

Today's guest post is by Blake Powell. Blake is on a mission to help writers overcome their doubts and create work that matters. Download his FREE guide “12 Stupidly-Simple Ways Guaranteed to Cure Writer’s Block Forever” to get your writing working for you again today.

Writers are a funny bunch. 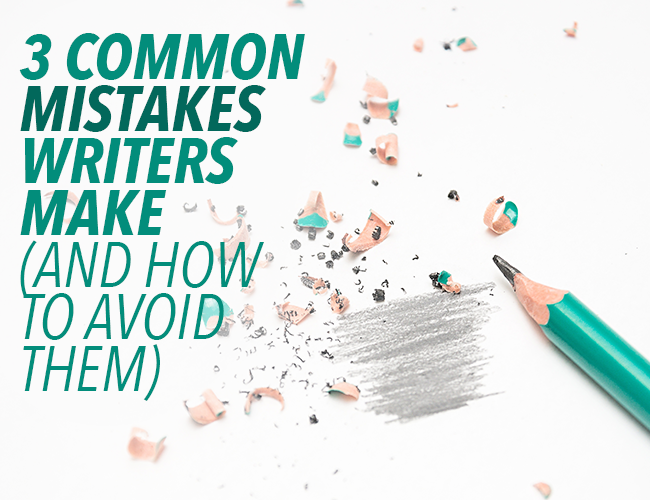 On one point, we are driven and self-aware, capable of exercising massive amounts of discipline when we need to focus on the task at hand.

Yet at other times, we’re distracted, self-critical, and destructive.

Part of the doubt writers face comes up because the creative process isn’t an easy thing to experience. It’s incredibly difficult to create something out of nothing day in and day out.

Even when we do get the courage to sit down and write, we find new and creative ways to avoid doing the important work we know we need to do. It’s a classic case of self-sabotage.

But it doesn’t have to be this way.

Because if you can identify these three crucial—but alarmingly common—mistakes writers make early on, then you’ll be way ahead of the pack.

Mistake #1: You Write Down Every Idea You Can Think Of (You’re a Rabid Note-Taker)

“There is no Idea Dump, no Story Central, no Island of the Buried Bestsellers; good story ideas seem to come quite literally from nowhere, sailing at you right out of the empty sky. . . . Your job isn’t to find these ideas but to recognize them when they show up.

You read somewhere that you should be taking down every idea you ever thought, especially if one of them happens to be good later on.

So every day you diligently take notes as they come to you.

But one day as you’re cleaning and organizing, you see all of the notebooks around your house. They’re scattered on your nightstand, your coffee table and in your drawers, and when you scroll through them you can even remember the times you scribbled them down in a frantic mess, desperate to catch onto the brilliance they might carry for your writing.

Even as you wonder about all these great ideas you once had, you wonder:

“Am I doing enough?”

The problem is, as King reminds us, that usually the good ideas just come to us. In fact, we often inherently know when an idea is “good” or “bad” at the moment we have it.

One of the biggest problems with being a rabid note-taker is that it can be easy to feel overwhelmed with all the ideas you’ve had but never taken action on and maybe never will.

The other problem with taking notes is that it simulates a feeling of writing when you’re not actually writing. And if you’re always checking your smartphone and capturing everything around you in Evernote, then you’re liable to miss engaging in the moments around you which will be the center of all the experiences you can use to shape your writing path.

While taking down notes is important, be wary of when you’re doing it and always make a plan to revisit these notes later if you can’t use them right away.

Be careful not to replace the cathartic effect of writing with note-taking, as it can trick your brain into feeling like you’ve already done the hard work of writing your story when all you’ve done is written down what you’d like to write later.

Instead, try going for a brisk walk without your phone and see how many ideas stick with you after that. You might be surprised at the result.

Mistake #2: You Do Too Much Research

Have you ever told someone, “Well, I would start writing my book, but I just need to do more research first.”

We’re all guilty of that, right?

Here’s the thing, though: do you really need to do more research first, or are you simply putting off doing the writing that needs to get done now?

If you’re getting bogged down in the outlining and planning stage of your book, ask yourself when your research is going to be enough.

If the answer isn’t in the foreseeable future then start writing now, because your story won’t get written by planning out everything that might happen as you’re working on your project. The best details usually come up in the spur of the moment and it’s up to you to include them in your story as you can.

Let’s look at it another way: If you were to look for an answer to every question you may have about the world, how long do you think that would take you?

Best to spend that time writing and make a note of any further information you’ll need to collect when you edit it later.

Imagine that you’re writing a paper for English class. After you gathered your sources and done a brief outline, you’d have no choice but to write the paper to get a good grade in the class. See if you can find a way to create some consequences for not doing your work in order to help the words flow more easily when you need to get your projects done.

Mistake #3: You Constantly Give in to Distractions Instead of Writing

You know that time when you needed more information to verify something before you could write that difficult part in your book, so you typed some questions into Google or Quora to see what came up for you?

Well, before you go ahead and dive into the many resources online to help you answer those questions, let me stop you. Because you’re about to enter into a dangerous rabbit hole indeed.

The truth is, the time you spend writing is sacred and it should be interrupted for emergencies only. Anything else is a threat to your productivity.

If you don’t create a distraction-free zone where your creativity can thrive, then you position yourself to easily give into distractions as they come. And if you’re constantly being pulled away from the task of writing at hand, your work in progress will suffer and you will feel like you’re falling behind every day because you can’t focus when you need to most.

Especially in the days of 24/7 access to anything we might need online, the ways we get distracted are endless. It’s harder than ever to stay focused—but not impossible.

Consider installing an internet-blocker like Freedom or use a free tool like Calmly Writer to remove the need to give into these meddling distractions that will pull time away from your writing instead.

Because these days, you’ll need all the help you can get to focus on your work at hand.

Try keeping a pen and paper by your trusty laptop, so every time you feel a distracting thought come up you can record it down and keep writing. This will help prevent you from acting on the impulses as they come.

Are You Ready to Be a Writer Again?

It’s easy to fall into the trap of these writing mistakes.

But once you’re aware of them, you’ll be able to easily identify them when they come up in your life and circumvent them with the solutions here.

You’ll find your writing will thank you as a result.

What problems hinder your writing? Can you think of any other common mistakes writers make? Let us know in the comments.

Pull out your current work in progress and spend fifteen minutes working on it right now. Don’t allow your research to prevent you from getting moving; instead, pick one chapter or scene you can write now and just get started.

If you don't have a work in progress, start a new story based on this prompt: a child discovers a toad in an unexpected place.

Make sure you keep a pen and paper beside you so you can write down the distracting thoughts as they come. When you’re done, share your writing in the comments below, and be sure to leave feedback for your fellow writers!