How to Use Freedom to Create Conflict Like Victor Hugo

We all know that transforming characters and a driving plot make for great stories. Something we discuss less is how contrasting ideals—and the conflict they create—can also enrich a story. 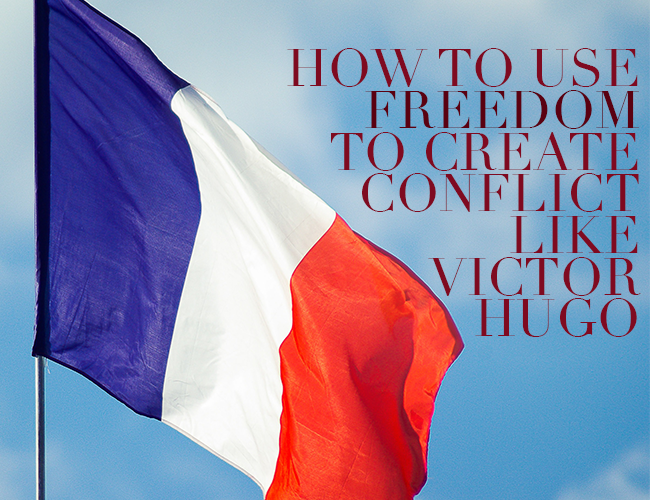 This week in the United States we will be celebrating the signing of our Declaration of Independence in 1776. Thinking on the ideal of independence has had me pondering how philosophical convictions play a role in our stories. If used well, they can enhance the narrative allowing the story to transcend the characters and become something more.

A Conflict of Freedom in Les Misérables

Take, for example, the book Les Misérables by Victor Hugo. In the story, multiple characters are seeking independence, but not necessarily together.

In fact, their pursuit of freedom often contradicts one another. What one character thinks of as independence will threaten the pursuit of what others seek.

Enjolras, the leader of the student group Les Amis de l’ABC, fights for political independence from a form of government. Calling for an end to monarchy and a turn to democratic ideals, Enjolras and his cohort pursue political freedom. Enjolras’ fight for freedom ends at the battle of the barricade where he and his friends are killed.

As the son of a wealthy family, Enjolars’ pursuit of this freedom had been theoretical until violence broke out.

In contrast, Jean Valjean’s desire for independence is very personal. Hugo’s main character is pursuing independence from a social status that has threatened his survival from the onset of the story. To live in the status assigned to him by the culture, Valjean must steal bread to feed his family, to escape incarceration (multiple times in the book), and live in hiding under multiple names.

His pursuit of independence from economic and social oppression are similar in content to Enjolras, but different in intimacy.

Cosette, Valjean’s adopted daughter, pursues a very different type of independence. While her guardian tries to hide, she longs for the freedom to live and to love. She wants the life of a young woman who is free to explore the world. This desire comes to a head when she falls in love with Marius Pontmercy.

Cosette’s longing for freedom from Valjean’s rules brings her into direct conflict with Valjean’s pursuit of freedom from the social system that has threatened his life.

A Conflict of Values

While the story of Valjean, Cosette, and Enjolras is wonderfully told by Hugo, I believe part of what has allowed his work to transcend time and be repeated in music and film is the philosophical discussion of independence. It is the ground the characters walk on. If we can also build a philosophical world for our characters to live in, our stories will be better for it.

What other stories use freedom as a driving theme and source of conflict? Let us know in the comments.

Take fifteen minutes to write a story in which two characters are pursuing contrasting understandings of independence.

Maybe a mother needs her eldest daughter to babysit while she works, but all the eldest daughter wants to do is hang out with her friends. Or maybe a student waxes elegantly about independence to an elder who has paid for it in blood.

Create two contrasting characters and use them to build a discussion about independence.

When you're done, share your story in the comments below, and don't forget to leave feedback for your fellow writers!