This Playwright Explains How to Write Great Dialogue

This guest post is by Maggie Sulc. Maggie is a playwright, dramaturg (I had to look that one up), and screenwriter from Texas, Tennessee, and, most recently, Toronto. You can follow her on her blog, Gladlybeyondaustinausten, and on Twitter (@austinausten).

You’ve hit that point in the writing process. You’ve had that story or poem germinating in your head for a long time. You know the characters backward and forward from their biggest dreams to their pickiest pet peeves. Now all that’s needed to move the piece forward is for them to speak—and for you to write their dialogue—except the words aren’t coming. They are standing there tongue-tied and silent. How do you find your characters’ voices? How do you write dialogue that sings? 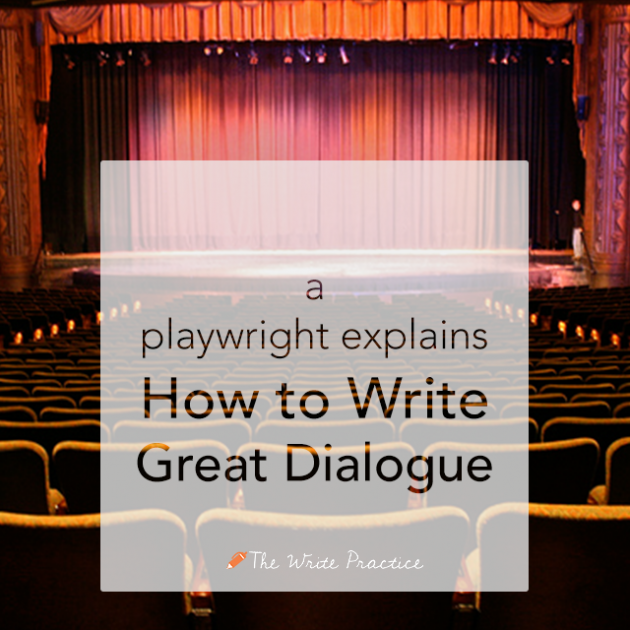 Photo by Graham (creative commons). Adapted by The Write Practice.

I’m lucky in this case. I know now that I’m good at dialogue. This is a very a good thing considering I’m a playwright. But even after I’d written my first two plays, I didn’t count dialogue as one of my strengths. It was just what the form called for and that’s what my first two big writing projects had to be: plays.

Then a couple of years ago I wrote a short story for a fiction workshop. When we started the discussion on my story, the other students started giggling. “What?” I asked, nervous to be diving back into fiction again.

“We knew this one was your’s before we started reading,” they said.

How? Because of the pages of dialogue.

In my fiction class, this embarrassed me at first. I don’t like boiling scriptwriting down to fiction hold everything but the speaking parts. But, as I began to get requests from fiction buddies and even some poets about how to craft good dialogue I realized that there is some truth behind the power of dialogue in playwriting.

Without engaging dialogue, a stage play usually dies. It sounds stilted and it falls prey to the same trap that catches many an amateur writer of any genre: telling, and not showing.

“Can’t you see that I’m trying to convince you to get out of this room?”

(Really obvious examples, I know, but it’s surprising how easy statements like these slip in when you’re more focused on plot than form.)

How to Write Effective Dialogue

Great playwrights (or fiction writers or poets or creative nonfiction authors, for that matter) can do a lot with just words. Read the prologue to Henry V if you’re not sure why William Shakespeare is such a big deal centuries later.

No audience will give its full attention to a play whose dialogue is stilted.
—George Wellwarth (tweet that)

Great writers don’t simply write to move the plot forward or describe every detail in order to create a vivid world for the audience on stage. They create that world through just a few details and, more importantly, through dialogue combined with action.

An Essential DON'T When Writing Dialogue

Great writers also don’t record verbatim what people say in everyday conversation; verbatim theatre is a genre in its own right but it takes a lot of work to gather enough material to create a worthwhile production.

Why? We stammer, stutter, leave sentences half-finished, jabber about boring tidbits, and fill the time with meaningless small talk.

Try recording the next conversation you hear on the bus or street corner. Your hand might start to cramp with all the “Um” and “Ah” before you reach the meat of their dialogue.

Want to Write Great Dialogue? Here's a Tip from Acting

Learn from the process actors use to get into their character. When the actor (or editor) gets a manuscript, the first thing they will ask is “What does this character want? What is the obstacle blocking him or her?”

As he or she reads through your dialogue, the actor will then note how your character tries to convey, protect, share, or fight for what he or she wants and when this tactic changes.

Your language can be poetic and lyrical or blunt and straightforward, but if there isn’t a clear desire behind it, then there’s no reason for it to be spoken and, therefore, it shouldn’t be dialogue.

Would you consider yourself good at writing dialogue? Share in the comments section.

Create two characters with opposing desires. For example, a mother and daughter are fighting. The mother wants her daughter to stay at an in-state college or university. The daughter wants to go as far away as possible.

Write their argument but here’s the trick: don’t take sides. As the writer, you equally defend and fight for both characters’ main objectives. Use your best tactics to play for both teams and see where this leads you.

Write for at least fifteen minutes. When you’re finished, post your practice in the comments section. And if you post, be sure to leave feedback for a few other practitioners.