How to Write a Fight Scene Readers Will Love

Today's guest post is by Stephanie O’Brien. Stephanie is a lifelong fiction author who loves experimenting with different genres, subverting common clichés and tropes, and picking stories apart to see what makes them work. To see more writing tips, as well as Stephanie’s novels, comics and music videos, visit her website. You can also connect with her on Facebook and Twitter @Stepha_OBrien.

If your story involves one or more fight scenes, you have a great opportunity. 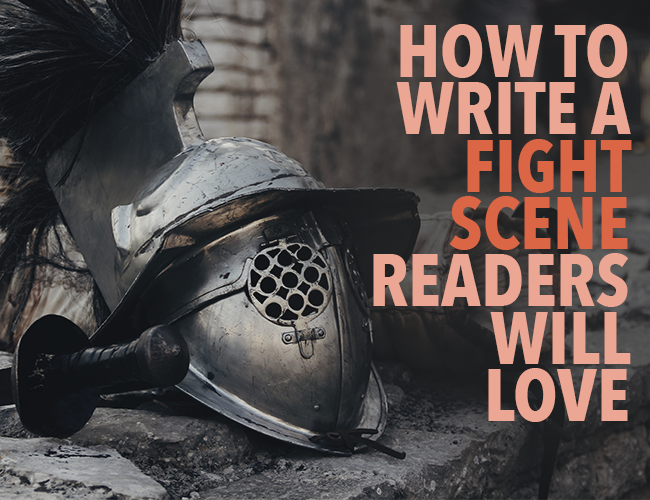 You can thrill your audience, change the course of the plot, and reveal new depths to your characters . . . or you can bore your viewers to tears, and make them wish that the battle would please just end already.

Writing a great fight scene can be a challenge, because you can’t rely on music, visuals and spectacular explosions the way some movies do. But you can create a battle that not only makes your readers hold their breath, but also impacts their emotions in a way that lingers long after they finish the book.

I’m going to give you six tips for how to write a fight scene well, so you can keep your audience on the edge of their seats while giving a whole new level of depth to your story and cast.

Two characters punching each other can be somewhat entertaining, for a few brief moments.

Two characters weaponizing their environment, using their superpowers in unique and clever ways, and coming up with plans to turn their opponent’s power against them can be absolutely fascinating, for far longer than that.

When you’re writing a fight scene, I encourage you to put some thought into the attacks, and—if it fits the characters’ personalities—to have the fighters use the powers and weapons at their disposal in unusual, smart and creative ways, rather than simply hitting or shooting at each other.

And speaking of fitting the characters’ personalities . . .

Tip #2: Show off the combatants’ personalities.

If a character is stern, practical and disciplined, have that show in their fighting style with efficient movements, precise attacks, and “dirty” but pragmatic tricks.

If they’re passionate and fierce, you could have them rush wildly at their opponent, make big and aggressive movements, and try to overwhelm their foe with a frenzied barrage.

Or you could flip that script to show hidden depths in your characters. Maybe Ms. Calm and Practical brings out her wild maniac side in combat, or Mr. Passionate and Fierce suddenly becomes very cold and focused when he gets into a fight.

Using the fight to give your viewers insight into your characters adds an extra layer of detail and interest to the conflict, and it’s a great opportunity to show who your character really is in a high-pressure situation.

It also adds an extra level of realism, and show that you’ve put some thought into how their personality shapes their fighting style.

Tip #3: Use the fight to create character development.

A cocky, competent warrior could discover for the first time that she isn’t the top of the food chain; there’s something more powerful than her out there, and she has to improve herself, ask for help, or accept defeat.

An uncertain wuss could find that he’s stronger than he thought he was, or that his cunning makes up for his lack of courage or brute force.

A person who prides herself on her kindness and gentleness could find a level of darkness and violence in herself that she didn’t know existed, or a person who thought he could kill an opponent easily could realize that it isn’t so simple when he’s required to take a life for the first time.

A fight scene is a high-stakes, high-pressure situation in which delusions and pretenses can be stripped away, and characters can be forced to confront things about themselves that they hadn’t known or wanted to acknowledge.

This can be a catalyst for future character development, and provide your audience with a deeper insight into your characters.

Tip #4: Show what they’re fighting for.

A fight scene by itself can provide a brief thrill, but a fight scene with high emotional stakes makes a far more lasting impact.

Either before or during the battle, or while the losing fighter lies defeated, show the audience what they’re fighting for.

Who or what did they want to protect? What fears, hopes or insecurities drove them into this violent situation?

The more the audience relates to their struggles, and the more attached they are to whatever it is that the character is trying to defend or accomplish, the more emotional impact the fight scene will have.

Tip #5: Call their motives and morals into question.

When the idea of acting on their motives or compromising their morals is only theoretical, the characters can dodge certain questions about themselves.

But when it’s time to actually hurt someone or take a life, it becomes much harder to avoid taking a good, hard look at the cause of their violence.

Is what they’re doing really worth killing someone over?

If they kill their opponent, can they still call themselves a “good guy”?

Or on the flipside, if they let a murderous villain live, are they now partly responsible for all the deaths he’ll cause in the future?

Fight scenes can force your characters, your audience, and you as the storyteller to ask and answer questions that most people never have to think about, which can reveal new layers to the personalities of everyone involved.

I believe that any story, or element of a story, should last as long as it needs to and no longer.

Write enough to paint a clear picture of the battle, use up your character’s arsenal of cool moves, get to the end of the dialogue you wanted to include, and show the character development you wanted to weave in, then stop.

Don’t pad the battle with a bunch of extra moves, or drag it out until the audience gets bored.

Ask yourself, “Does this section contribute to the quality of the battle? Does it showcase the character’s personality or abilities, add tension, or make the outcome of the fight more believable? Or is it just filler that could be cut?”

By removing the parts of your fight scene that don’t improve it, you make the parts of the battle that deserve to be showcased shine all the more.

“
Any story or element of a story should last as long as it needs to—and no longer.
Tweet this
Tweet

It's About More Than Just a Fight

When done well, a fight scene is SO much more than just a battle.

The best fight scenes aren’t just about fists, swords, guns and adrenaline. When used to their maximum potential, battles reveal a side of your characters that nothing else will, force them to dig deeper than they ever did before, and raise the stakes in a way that few other scenarios can.

“
Great fight scenes raise the stakes and reveal character in a way few other scenes can.
Tweet this
Tweet

When you use the tips in this article, not only will you improve your fight scenes and keep your readers more interested, but you’ll also flesh out your characters’ personalities, and add a whole new depth to their motivation and development.

If your current work in progress includes one or more fight scenes, I encourage you to revisit those scenes today, and see how you can make them even better than they already are.

Do you have any tips for how to write a fight scene? Have you noticed any fight scene mistakes that storytellers should avoid? I look forward to reading your suggestions in the comments!

Today, I invite you to spend fifteen minutes writing a quick fight scene that includes the following elements:

2. Creative uses of common superpowers or everyday items in combat.

3. A moment in which a character realizes something new about themselves because of the fight.

4. A poignant glimpse of what the character is fighting for.

Have fun, and be sure to share your battle scene in the comments and leave feedback for your fellow writers!