Story Ideas: How to Beat Shiny-New-Idea Syndrome and Actually Finish Your Projects

Authors often get asked where they get their story ideas. It’s one of the most common questions my student writers wish they could ask their writing heroes. They think, “If I could just find a way to come up with the next best-selling story idea like [insert famous author], then I’ll make it as a writer!”

But they misunderstand one critical truth: the magic isn’t in the ideas. It’s in the execution. 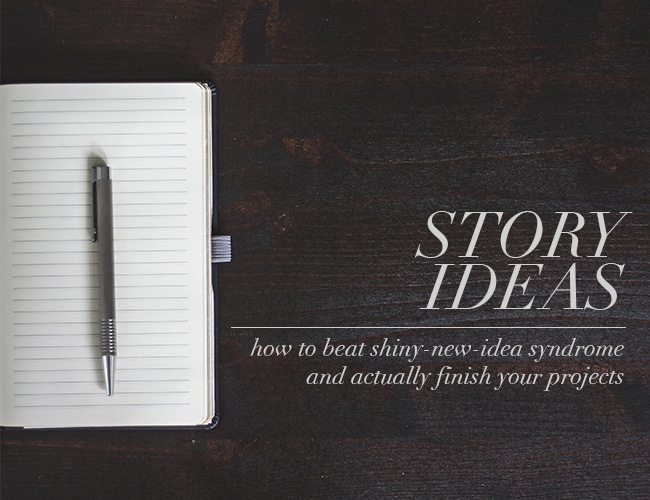 We need the ideas to get started, but many writers don’t have a system for capturing the ideas around them daily, and they don’t develop ideas consistently in practice.

We all have files full of unfinished projects and story ideas spread across notebooks and online platforms. Why do ideas lose their luster the moment we start writing them?

The Problem with Chasing Story Ideas

I had a student who was a few days away from his deadline for his final fiction project and he came to see me.

“I found a better idea and want to change my project,” he said.

“How much have you written on this new idea?” I asked.

I interrupted him. “No, how much have you written on it. How many words?”

He shifted uncomfortably. “None, yet.”

I shook my head. “Write it down in a sentence in your journal, and finish the original project first.”

He sputtered a bit about how great this new story idea was compared to the thousands of words he’d written on his current project.

I had to give him the talk I give many students and myself when we feel stuck and get caught up chasing a new shiny idea instead of getting in the chair and grinding out the work.

“Ideas are nothing until you execute them. Your desire to chase something else is resistance. You are close to finishing the longest piece of fiction you’ve ever written. Finish it.

“The idea will still be there. You’re afraid the current work won’t be as good as it seemed in your head, when it was a shiny new idea like the one you’re courting now.

“But the magic isn’t in the idea. It’s in the way you execute it, which means you need a first draft. Then we’ll revise it into the work you want it to be.”

It wasn’t the answer he wanted to hear, but he ultimately finished the original project.

“
A great idea is the start of a great story. But the magic isn’t in the idea—it’s in the execution. Pick an idea and write!
Tweet this
Tweet

A System for Managing Story Ideas

A system can minimize shiny-new-idea syndrome, because you will have a plan for what to do when a new idea appears in the midst of your current project.

I always have a notebook with me, but sometimes I capture story ideas online. I used to bookmark interesting articles, until I had so many stored that I never looked at them. Since then, I’ve transitioned online links to Evernote with tags to easily search my ideas.

I know writers who love to use Pinterest to keep character boards, settings, and history research in a visually organized way. Others love spreadsheets. Some keep idea boards in their writing spaces.

Find the method that you are most likely to use, and it will save you time as you collect and use your ideas. Then, when you are in the middle of trying to finish a project, you know exactly where to put that idea that keeps interrupting your work.

Whether you keep your ideas on paper or online, build time into your writing year to revisit your stash.

I used to dump all my notebooks in a jumble in a big bin when they were finished. Now, I put dates on the bindings and keep them in two boxes in my huge bin. Each summer, I make time to scan through the notebooks in one of the boxes, pulling one or two notebooks that have especially promising ideas to develop. Sometimes I just read through them and put them all back.

Online, I tag story ideas in Evernote by genre or fiction element (character, setting, conflict, interesting problem, etc.). When I’m looking for a fresh story idea, I can open Evernote and scan through a tag’s contents quickly.

The Most Important Step

As I shared with my student who was chasing a new idea, the most important thing to do is simply pick an idea and follow it through to completion, one idea at a time, over and over again. A system can minimize those distractions, because you can tell your inner squirrel that the idea is safely lodged in your notebook and will be revisited when it’s time.

Of course there may be times when abandoning a project is necessary, but don’t let your reason be “Oooo, look at this shiny new idea!”

Take fifteen minutes to write a scene where a character chases an idea. Do they find the success they’re searching for? Or is this a cautionary tale of how to get waylaid by distractions?

When you’re done, share your story in the comments below, and be sure to leave feedback for your fellow writers.