by The Magic Violinist | 12 comments

Writers are thieves. Intentionally or unintentionally, we steal from other artists all the time. You might have heard this paraphrase of T. S. Eliot’s words: “Good writers borrow; great writers steal.” 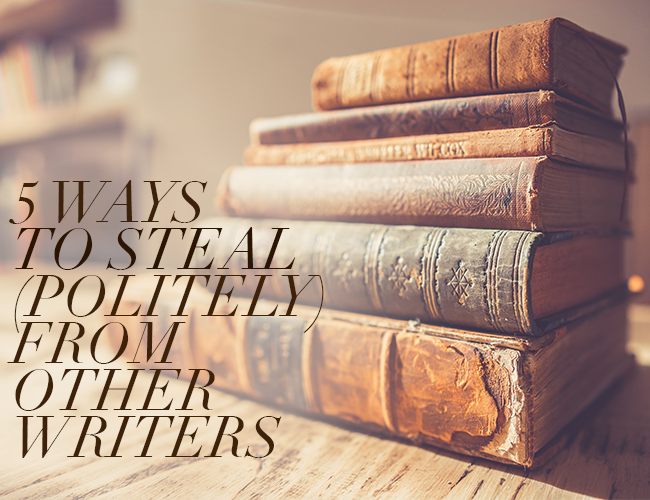 5 Ways to Steal (Politely) From Other Writers

We can’t help but be inspired and influenced by the stories we consume. However, we can steal productively by borrowing from other works in a conscious manner. Here are five ways.

This is one of the easiest ways to twist a well-known tale. What if Cinderella didn’t have her fairy godmother? What if Romeo and Juliet had gotten a happily ever after?

One little kink in the original plot and you have yourself a whole new story to explore.

2. Set it in a different time and/or place.

Taking a classic story and setting it in modern times is a common trope, as seen in many versions of Shakespeare’s works. You can also put a modern tale in the past, or in space, or under the sea. Mess around with different ideas until something sparks your interest.

3. Change the genders of the characters.

One of my NaNoWriMo projects was a Sherlock Holmes retelling, except Sherlock and Watson were young women. That, along with various other twists on the characters, was enough to make familiar people fresh and intriguing.

You could do this with every character in the story, or just a few, or maybe only one person. See how the dynamics change.

What happens if the adults in a particular situation were teenagers instead? How about the opposite? What if the teenagers became elderly people? It’s another deceptively simple tactic that can put a whole new spin on things.

Often times a three or four-minute song tells an incredibly complex story. If you dissect the lyrics and expand on the plot, add more characters, and bring out the heart of the song, you could have an entire short story or novel waiting to be written.

I’ve done this countless times, and I’m always pleased with the outcome.

Don’t Forget to Make Your Story Your Own

The caveat to all of this is you can’t take one of these strategies and expect your story to be perfect. You still have to make it unique, otherwise you run the risk of plagiarism or lazy writing.

All of these tips will get you in the right direction, and from there on out, let your imagination run wild. How can you turn that “stolen” art into something new and exciting?

Have you ever “stolen” from other writers? Let us know in the comments!

Take one of your favorite stories (a fairytale, a Shakespearean play, a classic novel, etc.) or a favorite song and use one of the strategies above to give it a new twist. Write for fifteen minutes. When you’re finished, share the result in the comments, if you’d like. Don’t forget to give your fellow writers some feedback, too. Have fun!