How the Grinch Stole Writing

Every Writer in Wordville liked stories a lot.
But the Grinch who lived North of Wordville did not!

The Grinch hated writing—the whole creative way.
Now, please don’t ask why. No one knows what to say. 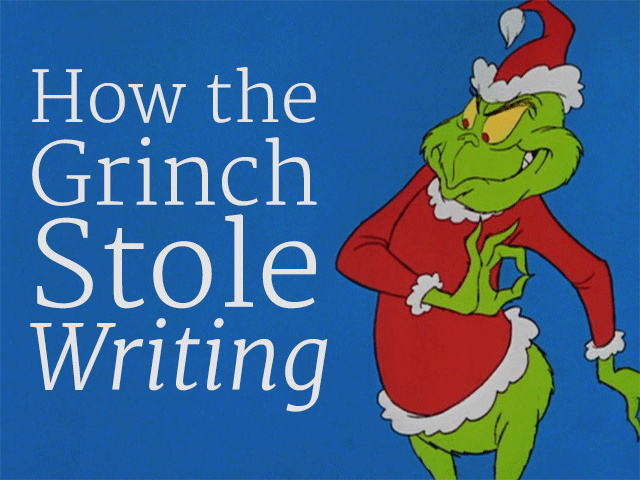 It could be, perhaps, he didn’t own paper or pen.
It could be he disliked trying again, and again.

But, I think the most likely reason was this, dear,
His heart was hijacked by nasty ol’ fear.

Fear is the #1 enemy of every writer, near and far.
But the Grinch held onto terror, like jam in a jar.

Staring down from his cave, he watched the townsmen below,
And vowed to destroy the stories they loved so.

He thought, in this room, she reads. In the other, he writes.
Then, they gather together to share laughter and delight.

“I hate all their happiness! I despise all their joy!”
“I’ll crush the imagination of every girl and boy!”

He drummed his grinchy fingers and growled, oh so mad.
He vowed not to stop ‘til they were nothing but sad. 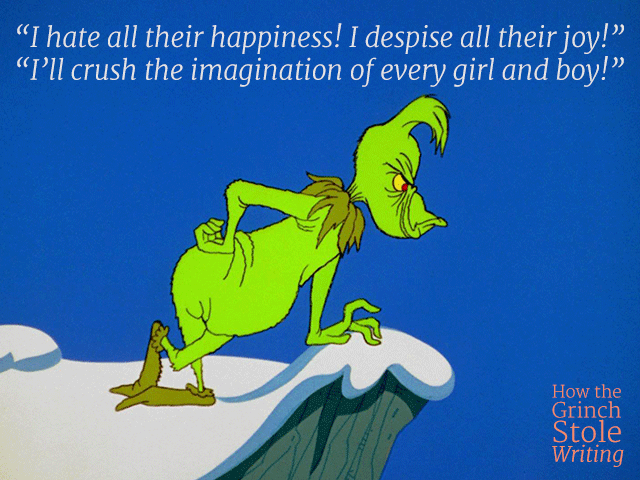 The Grinch laughed, then sneered. “I know just what to do!”
The he slinked through his cave to plot his evil, awful coup.

He crept down each chimney, of each house, one by one.
He stole everything they used for their writerly fun.

Journals, computers, papers, pens and books.
He robbed from each cranny, he thieved from each nook.

The writers had no more of their literary stuff.
Now, they couldn’t create their ridiculous fluff. 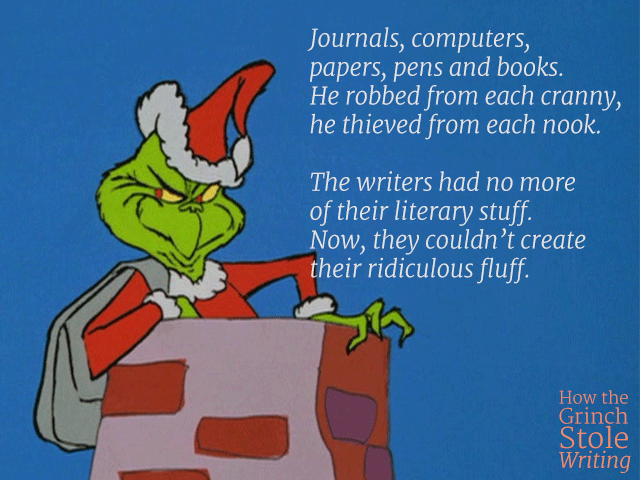 Up the side of Mount Crumpet, ten thousand feet in the air,
He rode to the tippy-top, then dumped the load without a care.

“I’ve ruined those writers!” he was grinchily humming.
“They are so stupid! They never saw it coming.”

“They’re waking up now to their lives ruined for good.”
“They’ll cry boo-hoo tears, just like they should.”

“That’s a noise,” smiled the Grinch, “that will be oh, so grand.”
He laughed deep from his belly, then put his ear to his hand.

“Listen.” He heard a sound rising over the dawn and the snow.
It started out soft, then it started to grow.

Every writer down in Wordville, the small and the tall,
Still gathered for stories—they were having a ball!

“How could this be?” he said, aghast and aloud,
As the townsmen grew into a huge, happy crowd.

What happened next to the Grinch? Well, in Wordville they say,
His icy, cold terror? It melted completely away.

The true meaning of writing shined right on through.
He gathered the stolen treasures. He knew what to do. 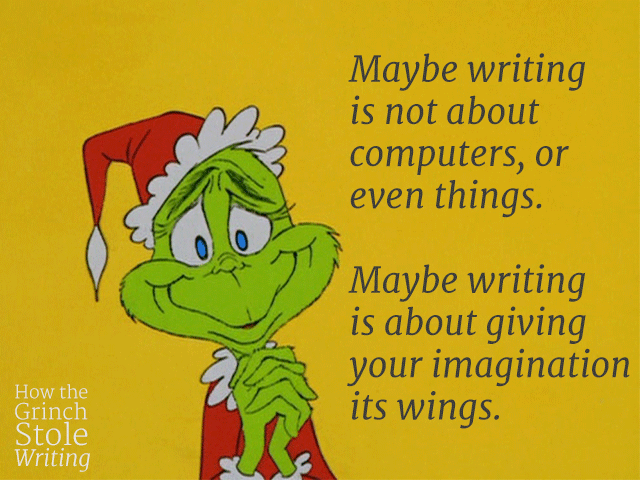 The Grinch whizzed with his load through the bright morning sun.
He experienced something brand new. The Grinch had some fun.

He rode straight into Wordville. He brought everything back.
The Grinch returned all the items. He had such a knack.

Writing goes with us, wherever we may go.
Stories live in our hearts. WE make them so.

Writing will always and forever will be.
I share words with you. You give yours to me.

I appreciate you all!