A Write Practice reader and I recently got into a discussion about head hopping, which is when you switch from one character's thoughts to another in the middle of the action. It is generally known as an editor's pet-peeve, but my friend wasn't having it. “I do see it in some pop fiction,” she said, “and don't find it distracting. Part of me still wonders why it's so taboo. Feels like a dumb rule to me.”

It's taboo because writers, editors, and readers have found when the narrator switches from one character's thoughts to another's  too quickly, it jars the reader and breaks the intimacy with the scene's main character.

Also, it's good to give readers ground rules—such as a consistent point of view—for how the storytelling will work, and if we break those ground rules, we can lose the reader's trust. 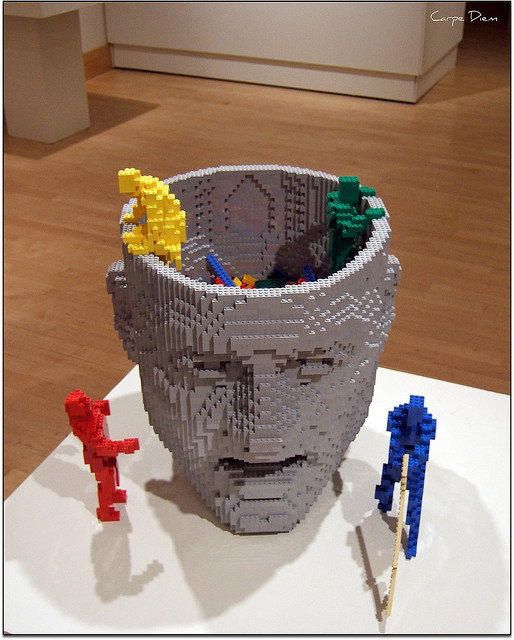 Art by Nathan Sawaya. Photo by Tony the Misfit.

However, to answer my friend's concerns, I will say this: there is good head hopping and bad head hopping. For example, in The Old Man and the Sea, Hemingway frequently commits this so-called taboo. Here are a few lines from the first chapter:

He was an old man who fished alone in a skiff in the Gulf Stream and he had gone eighty-four days now without taking a fish.

It made the boy sad to see the old man come in each day with his skiff empty and he always went down to help him carry either the coiled lines or the gaff and harpoon and the sail that was furled around the mast.

The old man had taught the boy to fish and the boy loved him.

Others, of the older fisherman, looked at him and were sad. But they did not show it and they spoke politely about the current and the depths they had drifted their lines at and the steady good weather and of what they had seen.

“Yes,” the old man said. He was holding his glass and thinking of man years ago.

Do you see how the narrator hops from the thoughts of one character or even groups of characters to another? Some might mistakenly call this head hopping. However, this is actually an example third-person omniscient point of view. Hemingway's omniscient narrator can peer into anyone's mind at will, as opposed to a third-person limited narrator, who would be confined to the thoughts of one character per scene.

This is why Hemingway technically isn't breaking the rules in The Old Man and the Sea. More importantly, though, it doesn't break the spirit of the rule because this narration doesn't seem awkward or jarring. The narrator is firmly in control of the scene. We aren't actually in any of these character's heads. We're in the narrator's, and he is taking us on a tour through the thoughts and feelings of the characters.

If, on the other hand, Hemingway was using third-person limited, he would have to put in a line break that would look something this:

This divider separates the flow of the narrative and warns the reader a major change is coming up.

If you'd like to use third-person omniscient point of view, you need to follow one very important rule:

Establish the point of view within the first two paragraphs.

For example, we've already shared the two most important lines regarding point of view in The Old Man and the Sea. These happen in the first paragraph:

He was an old man who fished alone in a skiff in the Gulf Stream and he had gone eighty-four days now without taking a fish.

It made the boy sad to see the old man come in each day with his skiff empty and he always went down to help him carry either the coiled lines or the gaff and harpoon and the sail that was furled around the mast.

These lines show us:

If we were in third-person limited omniscience, Hemingway would use a line break (which would be very strange in the first paragraph of a novel). Instead, he's making it clear in the very first paragraph he is using an omniscient narrator.

What do you think about head hopping? Is it as taboo as everyone says it is? Are there, in fact, any exceptions at all?

To practice understanding viewpoint, go through several of your favorite novels and read the first two paragraphs. Is the author using third-person limited or third-person omniscient (they could, of course, be writing in the first-person, but let's just ignore those books for now).

Make a list of the novels that use a limited or omniscient narrator. Also, take some notes about how they establish the viewpoint early on.