Henry Miller on How to Finish Your Novel

“One: Work on one thing at a time until finished,” Henry Miller commanded himself. “Two: Start no more new books, add no more new material to ‘Black Spring.’ Six: Cement a little every day, rather than add new fertilizers. Ten: Forget the books you want to write. Think only of the book you are writing.”

I was never very good at finishing. I used to get a good start on an idea for a novel or short story. I would get five or ten or twenty-thousand words into it. And then I would get another new idea for a more interesting project and take off doing that. I have five or six unfinished novels on my computer hard drive. I call them my skeletons, and I ask, occasionally, if they will ever be covered in flesh. 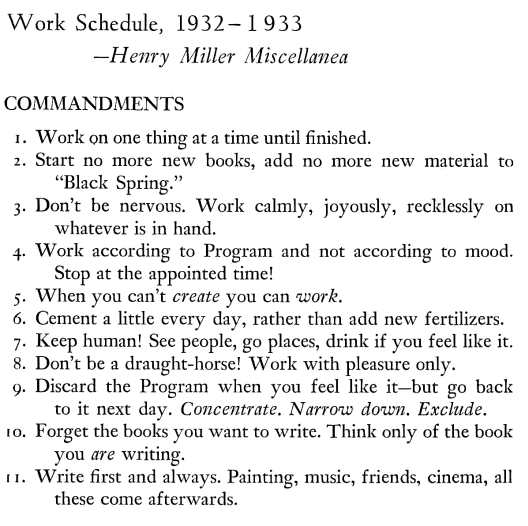 Henry Miller seemed to have the same issues. As he was laboring to finish his first novel, Tropic of Cancer, he wrote a set of eleven commandments to keep himself from flying into every new project.

Why You Lack Discipline

We dream up a new idea for a book, and since we are creative and emotional, we start working on that new project and abandon the one which is proving so difficult.

You get an idea, seemingly from God, and all you can see is possibility. It gives you chills, it makes your chest swell up with pride just to think about it.

How much better would it be to accomplish that novel, rather than waste away your time feeling like an idiot on the one you’re working on. Wouldn’t it feel so much better?

What Books Do You Want to Write Before You Die?

I sympathize with this especially because for me, sometimes the feeling has been right. I’ve started novels that weren’t very good. I’m glad I abandoned them. If I had finished them, they probably wouldn’t have been published, and if they had been published, I wouldn’t have wanted to put my name on them.

At the same time, if you don’t finish something then what is the point of all this writing anyway?

A few years ago, this problem was settled for me when I made the following realization:

Someday, I will die, and all the novels I dreamed of writing will die with me. Therefore, what books must I complete to die satisfied?

This solved the problem of finishing for me. By embracing my limits, I was able to prioritize the work that was most important to me. Rather than flying after any old idea that struck me as interesting at the time, I started searching for just a few ideas I could devote my life to, and since then, I have worked slowly and carefully on one novel for the last two years (it’s a really good idea).

And I promise you, I’m not going to give it up.

What books do you have to write before you die to be satisfied? Are you going to finish them?

Spend some time working on your work in progress today.

Write for fifteen minutes. As you write, ask yourself, “Is this a book that will satisfy me. Is it a good enough idea to spend the little amount of life I’m given?” If yes, then don’t ever stop working on it. If no, then maybe it’s time to look for a better idea.

And, most of all, may you finish something you’re proud to put your name on!