How Characters Change in Stories (And How to Write Believable Change)

You’ve probably heard this one before: Your character must change throughout the course of your story. Characters need to transform. 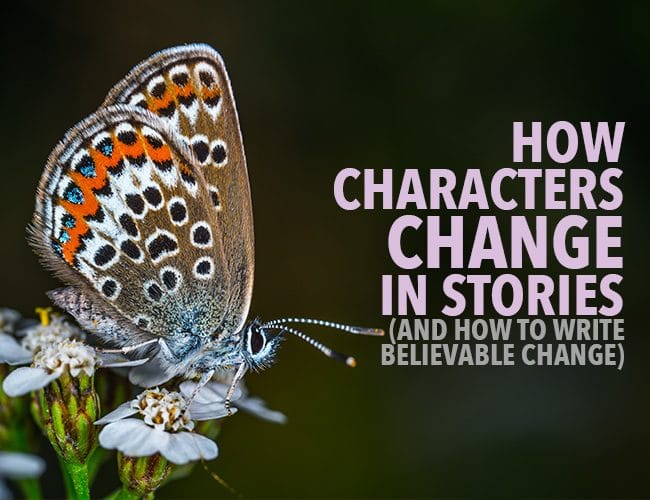 I see a lot of confusion over this concept. Writers can normally nail the change (weak to strong; bad to good; cynical to optimistic) but it often comes from a weird place that doesn’t sit quite right with what we know about the protagonist. Or it’s too big of a change (or too much of a “fairy tale ending”) to be believable.

Let’s take a look at how writers should deal with character change, and how creating a character arc might make for a more interesting cast and plot.

No One Likes Change

In real life, people change in small ways, but they’re resistant to that change.

Change happens slowly, in a sort of cocooned metamorphosis, like a caterpillar to a butterfly. It doesn’t happen overnight, it rarely happens without lapses into previous behavior, and there better be a good reason for it to happen to begin with.

The thing that makes change in stories so fascinating for people is that, despite loathing change, humans want to believe we’re capable of changing, preferably for the better.

So your characters must change in order for the story to be worth reading. But they don’t have to like it.

Sometimes, characters don't even change for the better, ending tragically.

Think of this: Your character changes because of the things happening around them. Not because they want to.

Your character is forced to change by circumstances they can’t control. To survive and/or thrive, they must change to combat those circumstances. They must make decisions, and therefore, they must act over the course of a story.

Character change is triggered by an event. A big one.

It doesn’t have to be “big” as in a death or massive explosion (but it definitely can be!). It can be something smaller, like hearing your friend’s parents are getting divorced or your oldest child graduating from preschool.

Note that your character doesn’t choose this event. It’s an outside force that’s thrust upon them.

Then more events happen throughout the second act that force your character forward in a struggle toward transformation.

“
People don't like change. Your character won't choose to change because they want to. Make sure your story includes an event that triggers a transformation, something that requires them to change whether they want to or not.
Tweet this
Tweet

Shawn Coyne, editor and author of The Story Grid, talks about how there are causal or coincidental agents of change in an inciting incident. An inciting incident should happen in every scene, and, in a global way, it kickstarts the beginning of the story.

Main characters start out in a story lacking something.

In all of these examples, we see how the main character lacks something—needs something—and because of this they need to change over the course of the story in order to fulfill what they're lacking.

However, if nothing happens to the protagonist, they have no reason to change. They need something to force them to act.

This is where causal and coincidental inciting incidents come into play—along with a series of escalating stakes and conflicts.

A causal inciting incident is when a person disturbs the main character's status quo, like Effie pulling Prim's name in the Reaping.

A coincidental inciting incident is when a, you guessed it, coincidence forces a character to act. Like a tornado.Twister, anyone?

Either way, over the course of a story the protagonist will change because events and actions force them to make decisions.

They become dynamic characters because even doing nothing means that the characters will suffer consequences in some way.

And while the amount a character changes from the beginning of the story to the end of the story will vary throughout the plot, change must happen if the protagonist is going to get what they want or what they lack.

Change Should Be Believable

Do I really believe Scrooge woke up with a personality completely opposite from the one he had when he went to sleep? Not quite. I tend to think ole Scrooge went back to his miserly ways right after the shock of the ghosts wore off. Maybe not quite as miserly, but still.

That’s why aiming for a more subtle change often makes more sense within the confines of your character’s personality.

If a timid man is forced to defend his friends and family, that doesn’t mean he’s going to start playing a superhero all over town. That means he now knows he’s capable of stepping up with the going gets tough.

A grumpy teen might change her attitude and treat people with a little more respect, but that doesn’t mean she’ll suddenly become a do-good saint. It most likely means she’ll just stop snapping at her parents.

Harry Potter isn't ready to take on Voldemort for good at the end of The Sorcerer's Stone, but he's learned a lot about himself and the Wizarding World by the end of the story, and he has evolved from the quiet boy locked inside the cupboard under the stairs.

Of course, maybe the opposite is true.

Maybe your timid man becomes the new Batman. Maybe your surly teen goes off to build houses in Haiti. It’s possible. But remember, the more massive the change in your character, the more important and life-altering the triggering event must be to them.

You should know your character better than anyone, so make sure their change happens in a way that’s realistic for them and proportional to the size of the trigger.

Character Traits: Do They Change, Too?

When considering character development for your main character, or multiple characters, you might be wondering if character traits must also change from the beginning of the story to the end.

I think what's important to remember is that 1) not all characters are dynamic characters and 2) how a character changes doesn't mean they also change their personality (although this is common).

Consider Hans Solo in Star Wars: A New Hope. Hans becomes less selfish by the end of the movie and returns to help Luke take out the Death Star, but his overall personality hasn't changed. In fact, some of his character traits that are fan favorites remain constant, like his snarky personality and sense of recklessness.

However, some of Hans's negative character traits are smoothed out a bit, like his greediness and cynical outlook on life. He doesn't believe in the Force partway through the story (near the midpoint), but his perspective starts to evolve by the end.

He's still egotistical and at times selfish, but hey, there are other movies to follow.

What about static characters?

You can still have a story with a static character, although it's more common that these characters are supporting characters.

Think about how your main character changes from the beginning of the story to the end of the story. They don't do that alone—they need static characters, often mentors, who can help them learn essential lessons that will help them change.

Look at King George IV in The King's Speech. Lionel Logue has a big secret that's exposed late into the story. But his confidence in how he teaches speech, his rigor, and his loyalty to the king act as inspiring constants that push Bertie to overcoming his pride and overcoming (though not perfectly) his speech impediment.

It's wonderful when characters put together in a story inspire change in one another, but this doesn't always have to be two-sided, even if a static character's life is changed because another character pulls them into an adventure.

Do Characters Change in Short Stories?

They can. Just because you're writing a short story doesn't mean that a character doesn't need something, so change is definitely a possibility.

However, while something needs to change in order for a story to be great, that something doesn't always have to be a character (in a short story, or even comic).

Like I said at the outset, characters don't want to change, and they won't change easily or quickly. Scrooge takes an entire book. Harry Potter takes an entire series. In a short story, you (and your characters) don't have that kind of time.

That means you probably won't see a massive character transformation in just a few thousand words. The characters in a short story won't necessarily change their entire way of thinking about the world, or upend their livelihood, or establish a completely different set of actions from their normal habits.

The change can be subtle, maybe a slightly different way of responding to the world. Or maybe it's hardly character change at all, just a new awareness of something they didn't know before.

Take Ernest Hemingway's “Hills Like White Elephants,” for example. To describe the plot rather too simply, a man and a woman have a conversation. But don't let me spoil it for you—read it here, then come back to this article.

At the beginning of the conversation, the man acts confident and assured as he tries to tell the woman that “a simple operation” will be fine and make their lives better. The woman is hesitant and resistant.

By the end, the man is still confident and assured, and the woman is still hesitant. Neither of them has become a different person through the course of the story. (Although there are hints that the woman might make a change and take some new actions after the story ends.)

What has changed? At the beginning of the story, the two characters don't know what the other really thinks about the woman's pregnancy. By the end, an unspoken truth has been spoken: he wants to abort the baby, and she wants to keep the baby.

Even though the characters themselves haven't changed (yet), something is different. A truth that was hidden is now clear, and their previous unity (or semblance of unity) now has a rift in it.

Remember this key: even if the characters in a short story don't change, something in the story must change.

Realistic Is Better Than Drastic

You know your character has to change, but your readers aren’t going to empathize with that change if you step outside of bounds. This goes for fictional characters in works of fiction, and nonfiction characters in memoirs, too.

This is also why readers learn and grow from stories—they teach us how to overcome our own conflicts vicariously through character development. And different characters, like people in real life, change in different ways.

Above all, when writing, keep your change realistic and in line with your protagonist’s personality. Be sure to check out this article for details on moving your character through each step of change throughout your story.

What's the protagonist's change in the story you're currently working on? Let me know in the comments!

Today, we’re going to mix it up a bit and have fun with the idea of change. The title for today’s practice is “Metamorphosis.” Take a couple of minutes to ruminate over the title, then write for fifteen minutes.

Don't forget to share your work in the comments and give feedback to your fellow writers!