How to (Nearly) Win a Pulitzer in 5 Steps 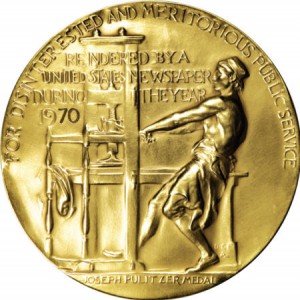 The Pulitzer Prize for fiction, as you probably know, was not awarded this year. The fiction panel nominated three books from a reading list of 300. (Can you imagine reading 300 books in a year?)

However, Michael Cunningham's article on how the three Pulitzer nominees were chosen is a fascinating guide for how to angle for the Pulitzer.

If you want to win the Pulitzer, here's how in five (not-so) easy steps:

If you want to win a Pulitzer, Cunningham says go big:

[We agreed] we would tend to favor the grand, flawed effort over the exquisitely crafted miniature. We preferred visionary explorers to modest gardeners, and declared ourselves willing to forgive certain shortcomings or overreachings in a writer who was clearly attempting to accomplish more than can technically be done using only ink and paper.

Be ambitious. Write the story you don't know if you have the skills to tell. Take more risks.

There's nothing, of course, wrong with a small story. However, these judges decided a national prize deserves a country-sized story.

2. Discover Something New or Destroy Something Old

One of the jurors looked for stories where something “happened”:

Maureen was drawn to writers who told a gripping and forceful story. She did not by any means require a conventional story, conventionally told, but she wanted something to have happened by the time she reached the end, some sea change to have occurred, some new narrative continent discovered, or some ancient narrative civilization destroyed.

3. Make Your Reader Fall in Love

This might be beyond your control, but great books make their readers fall in love with them. The third juror was looking for just that:

Susan was a tough-minded romantic. She wanted to fall in love with a book. She always had reasons for her devotions, as an astute reader would, but she was, to her credit, probably the most emotional one among us. Susan could fall in love with a book in more or less the way one falls in love with a person. Yes, you can provide, if asked, a list of your loved one’s lovable qualities: he’s kind and funny and smart and generous and he knows the names of trees.

But he’s also more than amalgamation of qualities. You love him, the entirety of him, which can’t be wholly explained by even the most exhaustive explication of his virtues. And you love him no less for his failings. O.K., he’s bad with money, he can be moody sometimes, and he snores. His marvels so outshine the little complaints as to render them ridiculous.

To win a Pulitzer, every sentence must be beautifully written, says Cunningham:

I was the language crank, the one who swooned over sentences. I could forgive much in a book if it was written with force and beauty, if its story was told in a voice unlike anything I’d heard before, if the writer was finding new and mesmerizing ways to employ the same words that have been available to all American writers for hundreds of years. I tended to balk if a book contained some good lines but also some indifferent ones. I insisted that every line should be a good one. I was—and am—a bit fanatical on the subject.

Of all of the criteria, this may be the piece most in your power. Beautiful writing requires only dogged editing, the willingness to write and rewrite a thousand times until each sentence is perfect. Or if not perfect, at least well written.

Are you willing to spend that much time with each sentence?

The last criteria, however, dissolves all the others:

Fiction involves trace elements of magic; it works for reasons we can explain and also for reasons we can’t. If novels or short-story collections could be weighed strictly in terms of their components (fully developed characters, check; original voice, check; solidly crafted structure, check; serious theme, check) they might satisfy, but they would fail to enchant. A great work of fiction involves a certain frisson that occurs when its various components cohere and then ignite. The cause of the fire should, to some extent, elude the experts sent to investigate.

Great writing is, in other words, a mystery.

A list of tips like this is, to some extent, a foolish exercise. While you have control over much of your writing, there will always be pieces that escape your grasp, that will not be controlled by a mortal, that must be rendered unto God.

What do you think? Is it possible to intentionally write a prize winning novel? How would you go about doing it?

Today, write something grand, ambitious, risky. What story will show the most transformation? How can you write as beautifully as you have ever written?

Write for fifteen minutes, and when you're finished, post your grand practice here in the comments.

And if your writing falls short of a Pulitzer, don't worry. This is just practice. 😉