If you’re like me, one of the main reasons you read is to receive an emotional transference from the author. You love books that don’t just make you think, that don’t just entertain, but that make you feel something. 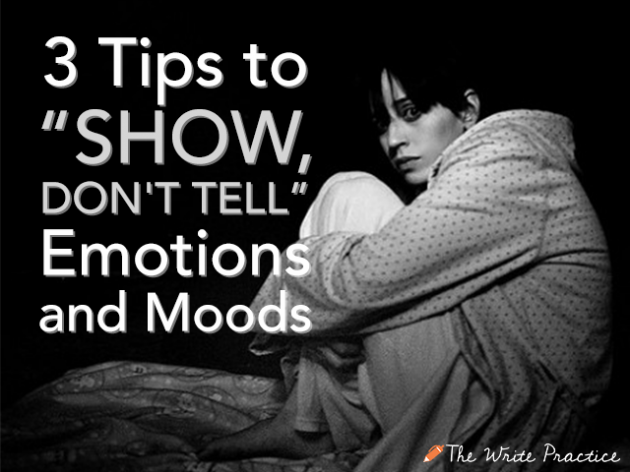 It’s the magic of reading: that an author can arrange a series of letters in a certain order and that these letters can affect our emotions.

As a writer, how do you develop mood in a short story or in the chapter of your novel without telling? Is it possible to build up emotional language while following the advice “Show, Don’t Tell”? In other words, can you make your readers feel something without writing like Stephenie Meyer or E.L. James?

How to “Show, Don’t Tell” with Emotion

I’ve been studying Roberto Bolaño’s short story “Gómez Palacio” from the New Yorker, and it’s a clinic on how to show emotion and mood without telling.

Edgar Allen Poe said this about how to write a short story, “A short story must have a single mood and every sentence must build towards it.”

The mood of “Gómez Palacio” is failure and the other emotions that come with it, like self-pity, paranoia, and depression. The twenty-three year old narrator feels he has already washed up and has exiled himself to a sparse town in the deserts of northern Mexico.

Here are three ways Bolaño builds up a single mood without telling:

Orscon Scott Card says one of the best ways to characterize is by talking about motivation. Instead of writing specifically about feelings, write about why your characters are doing the things they’re doing.

Here’s an example from “Gómez Palacio”:

I don’t know why I accepted. I knew that under no circumstances would I settle down in Gómez Palacio. I knew that I wouldn’t stick to running a writing workshop in some godforsaken town in northern Mexico.

Throughout the story, Balaño’s narrator reveals how paranoid he is. However, he never explicitly says, “I was so paranoid.” Instead, he builds the mood through action.

Here’s an example of how Bolaño brilliantly shows the author’s paranoia:

I found it hard to sleep at night. I had nightmares. Before going to bed, I would make sure the door and the windows of my room were securely and tightly shut…. Then I went back to bed and closed my eyes, but having drunk so much water I soon had to get up again to urinate. And since I was up I would check all the locks.

This works so well because instead of using the word paranoid, he shows the author doing paranoid things. And later, it says:

When we came out of the classroom, the director was waiting with two guys who turned out to be civil servants employed by the state of Durango. My first thought was: They’re policemen, here to arrest me.

This is probably my favorite part of the story. And you’ll notice there’s a little bit of telling in this, but it works because there’s so much showing as well:

On the horizon I could see the highway disappearing into the hills. Night was beginning to approach from the east. Days before, at the motel, I had asked myself, What color is the desert at night? A stupid question, yet somehow I felt it held the key to my future, or perhaps not so much my future as my capacity for suffering.

Later on, we get even more description of the night, and the description reveals the dark thoughts of the narrator while also making the, somehow, beautiful.

To use description to build mood, ask yourself what your character would notice in their state of mind. Focus on colors that seem to show his mood. Think of your sentences like brush strokes, and you’re painting a landscape filled with emotion.

Now That You’ve Shown,  Do Tell

As important as it is to “show, don’t tell,” there are situations where it’s better to tell, don’t show. For example, here is the very first sentence of “Gómez Palacio”:

I went to Gómez Palacio during one of the worst periods of my life.

That’s about as tell-y as you can get, but it works.Sometimes a short burst of telling can be worth paragraphs of showing. Your job as a writer is to figure out when to use which.

Practice writing about a mood.

Write for fifteen minutes. When you’re finished, post your practice in the comments section.

Have fun! (Unless you’re writing about sadness. Then, don’t have fun.)