This post is by our newest regular contributor, Sue Weems. Sue is a writer, teacher, and traveller with an advanced degree in (mostly fictional) revenge. You can read more of her writing tips on her website. Welcome to the team, Sue!

Mark Twain’s advice might be just what you need to take your dialogue and prose to the next level. 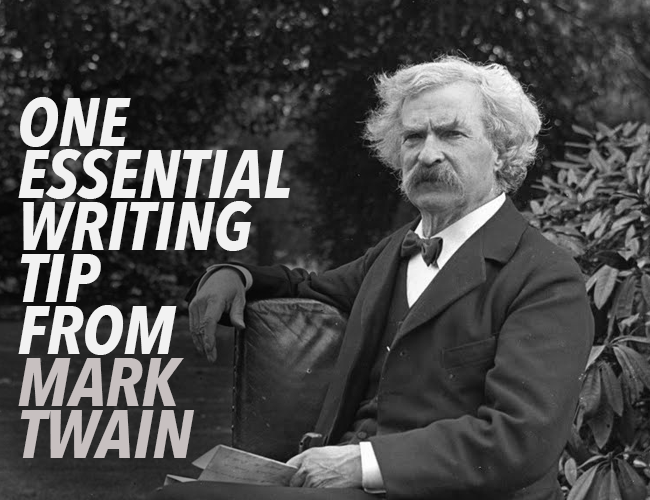 Mark Twain is one of my favorite writers. When I read his essays last year, I came across a bit of revising gold in a 1906 essay titled “William Dean Howells.” Most of the essay praises Howells’s prose in general, but the final paragraphs address what Twain calls “stage directions.” He defines them as:

. . . those artifices which authors employ to throw a kind of human naturalness around a scene and a conversation. . . . Some authors overdo the stage directions, [and] they elaborate them quite beyond necessity.

I hadn't heard the term stage directions used in reference to fiction, and I was intrigued.

Novels don’t have stage directions, do they?

In a play, stage directions are only visible to the audience through the movement and actor's inflection during the performance. In a novel, we rely on description to set scenes, give context, and deepen characterization. When done well, stage directions don't distract from the character or action.

Twain lists several examples of what he considers poor stage directions following dialogue. Take a look (and don’t miss his authorial analysis of each in parentheses):

“. . . replied Alfred, flipping the ash from his cigar.” (This explains nothing; it only wastes space.)

“. . . responded Richard, with a laugh.” (There was nothing to laugh about; there never is. The writer puts it in from habit—automatically; he is paying no attention to his work; or he would see that there is nothing to laugh at; often, when a remark is unusually and poignantly flat and silly, he tries to deceive  the reader by enlarging the stage direction and making Richard break into “frenzies of uncontrollable laughter.” This makes the reader sad.)

“. . . murmured Gladys, blushing.” (This poor old shop-worn blush is a tiresome thing. We get so we would rather Gladys would fall out of the book and break her neck than do it again. She is always doing it, and usually irrelevantly. Whenever it is her turn to murmur she hangs out her blush; it is the only thing she's got. In a little while we hate her, just as we do Richard.)

Did you notice Twain’s emphasis on the reader?

Twain's analysis keeps circling back to the reader's experience, imploring us not to waste the reader's time or attention. Dialogue is an opportunity to reveal character and move the story forward with conflict, but careless action dilutes our purpose and wears out the reader.

“
Good stage directions match the pace of the scene and give only information the reader needs.
Tweet this
Tweet

In a mystery or thriller, the lengthy description of the long walk in the dark might be just the thing to keep the reader on the edge of his seat. In a high-speed chase scene, I don't care about the driver flipping her hair or the buttery amber-colored custom leather seats, because unless her hair or those seats are going to keep the protagonist from crashing? It's only slowing me down.

In his concern for the reader, Twain isn’t against using action tags; in fact, he argues that his friend Howells’s stage directions are sometimes so effective, they make dialogue unnecessary. He’s simply tired of overused phrases. If I'm honest, I am too.

How do I find the stage directions in my story?

After reading Twain’s essay, I searched my latest manuscript for stage directions. I began by skimming the story for dialogue, and then evaluating the action sentences before and after each dialogue exchange.

I asked myself four questions:

Once I started looking for them, stage directions popped up everywhere in my manuscript, and I began cutting the ones that were wasting my reader's time.

How to Cut Stage Directions: an (Embarrassing) Example

Here's a recent work-in-progress with the revision (and analysis in parentheses). In this scene, Evyn's grandmother Cici is in the hospital after being hit by a car. Their neighbor Lutz is trying to convince Cici to stay put.

Lutz stood. “Evyn can stay at my house, or I’ll stay at yours. You need to rest.” (Grabbed? Not consistent with the tone here, and it doesn't add anything to conflict or theme. Cut. I added “stood” because before this line, he's seated away from the bed. I want to move him forward while letting the reader know he's the one talking. And I want to do it quickly, unlike this analysis note.)

“No.They’re not.” (The dialogue is already firm and resolute, so stating it is redundant.)

“So help me, William Lutz, if you meddled with my release, I will have your head. We have only three days until the opening curtain.”

“Have you looked at your leg lately?” Lutz asked. (Again, this adds nothing.)

“It’s a little banged up. I’ve suffered worse.” She sagged against the pillows. (Sagging is a better way to show she’s tired. Please pass my Queen of Redundancy crown.)

My stage directions are guilty of the dreaded telling versus showing. The words I crossed out might not always be poor stage directions, but the repetition and careless use of them weakens my writing.

Twain closes his essay with a warning:

I always notice stage directions, because they fret me and keep me trying to get out of their way, just as the automobiles do . . . by and by they become monotonous and I get run over.

Let’s pay homage to the great Mark Twain and avoid running over readers with our stage directions.

Can you think of stage directions that distract rather than help, like Richard laughing or Gladys blushing? Let us know in the comments.

For today's practice, you have two options:

When you're done, share your writing in the comments below. Let us see the original, unedited version, and your second pass with better stage directions. And if you post, be sure to leave feedback for at least three other writers!