How to Write a Story Without an Outline

Today’s guest post is by V.R. Craft. V.R. always heard you should write about what you know, so she wrote Stupid Humans, drawing on her retail experience and subsequent desire to get away from planet Earth. Now self-employed, she enjoys clearance sales, yard sales, and social media, where she finds inspiration for a sequel to Stupid Humans every day. You can find her on Facebook, Twitter, and Pinterest.

I have been opposed to outlining since childhood.

I distinctly remember a time in middle school when I was required to write essays and turn in my outline as well. I couldn’t do it. 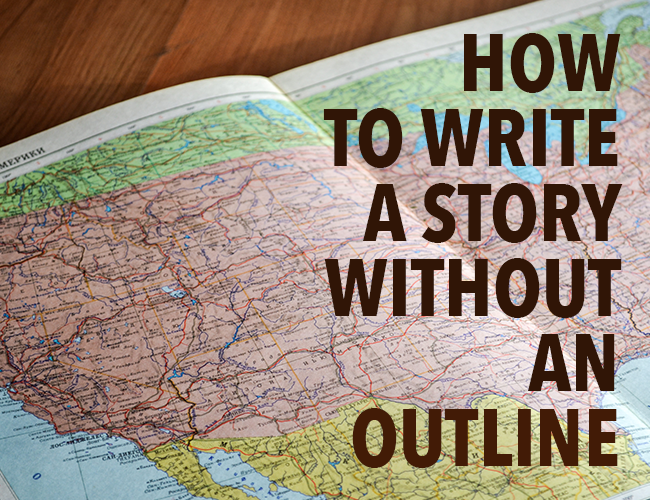 The necessity of the outline had a paralyzing effect on me—I couldn’t write anything if I had to know everything I was going to write beforehand. I took bad grades on good essays because I refused to do the outline. (To me, that’s like taking points off a bicyclist at the Tour de France for not using training wheels, but my teacher didn’t see it that way.)

Eventually, my mom convinced me to write the outline after I wrote the essay, which was a huge waste of my time, but did improve my grades. I’ve never written anything with an outline since.

I know many writers who say they can’t write without an outline. While it can help people organize their thoughts, I don’t think it’s absolutely necessary for anyone.

In fact, I find it can stifle creativity and stop the flow of good ideas. It certainly does for me, and I’m not alone. There’s even a name for writers who don’t outline: Pantsers (because we fly by the seat of our pants).

My first book, a comical science fiction novel called Stupid Humans, ended up being around 140,000 words in its published version, all written without an outline. I had a general idea of where I was going with the plot, and had a few key scenes in my head, but I also had a lot of fuzzy gray spots—areas where I knew I needed to write something to fill in the gap; I just didn’t know what.

One of the members of my writing group is also a pantser, and he compares it to going on a road trip—you know your destination, but you don’t know what route you’re going to take. While I had a general idea of the main plot line in Stupid Humans, there were characters and subplots I never thought of—until I started writing them.

But No Outline CAN Mean No Planning

Knowing where you’re headed on a road trip can be helpful, but it’s not essential. There’s something to be said for just getting in the car, picking a direction, and putting the pedal to the metal.

I’ve also started other projects with no clue where I was going, including one that became my next book.

How Do You Organize A Story Without An Outline?

To organize my story without an outline, I keep in mind some general ideas about writing a plot. There are many helpful books and blog posts on this subject, so I’ll just give you the simplified version I usually have in my head: You have a main character. He/she wants something. Someone/something gets in the way.

“
A basic plot: A main character wants something. Someone or something gets in the way.
Tweet this
Tweet

You have an idea. A character, a scene, an interesting setting. You don’t know where you’re going with it, but you find it interesting.

What do you do? Just start writing.

If you have an interesting character, figure out what he or she wants and what’s getting in the way. It doesn’t have to be a basis-of-my-book’s-plot level problem, although it can be.

But it can also be something simple: For example, your character is hungry. But his annoying boss is forcing him to work through his lunch break, and his coworker bought the last package of pretzels from the vending machine and is loudly crunching them on the other side of the cubicle.

What do you do next? Keep writing, until you either finish the story or, for a longer piece, have some idea of where you’d like the story to go.

But What If I Can’t Think Of Anything?

I suspect this is why some people prefer to stick with the safety net of an outline—they fear that moment of not knowing what to do next. What if you start writing and suddenly you don’t have any idea how to continue?

This happened more times than I can count when I was writing Stupid Humans. Often I didn’t think I would ever finish the book, because I didn’t know how to finish a scene.

So what did I do? I kept going.

There’s nothing wrong with that. But if you can’t think of anything that strikes you as a good idea, don’t let that stop you.

You can always delete or edit it later, but you can’t do much with a blank page. By writing a not-so-good idea, you might eventually stumble on a better idea that you never would have had if you hadn’t started writing something.

At one point, when I was writing Stupid Humans, I didn’t know how to add tension to supporting character Hank’s plot line. I knew an old enemy of his would show up and complicate his already challenging situation, but I had no idea who the enemy was or why he was mad or why the reader should care. However, I was determined to write a chapter that day, good or bad.

At first I felt like I was writing garbage, but I kept going anyway, and after a page or two I started to feel like I was writing something I might consider not deleting. By the time I was done, I’d written a scene a beta reader later told me was his favorite part of the whole book. (Somewhere along the way, I also figured out the enemy-from-the-past was a billionaire beer mogul who was going to crash a peace rally to pitch his product as a solution for ending hostilities.)

There is one important guideline to keep in mind: Kill your darlings. You’ve probably heard this before—be a good self-editor, and get rid of parts that aren’t moving your book forward, aren’t interesting, or both.

The Delete Key Is Your Friend

For example, the first draft of Stupid Humans was roughly 176,000 words. The second draft was around 150,000. By the twelfth draft or so, it was in the neighborhood of 140,000. My editor then trimmed about another 1,000 words, mostly by removing unnecessary uses of the word that—something I’ve since learned to avoid.

Or, you may decide you like both stories but they don’t belong in the same book. Then you simply write two different stories.

Some people have a hard time deleting a paragraph if they spent a lot of time writing it, or if it contains a description they really like. If you get very attached to your writing, it can help to simply cut and paste the segment in question into a new document, so you can use it in a future piece of writing. Then go back and see if your story still works without it.

If so, you should probably leave that piece in its new home.

A Way to Free Your Creativity

Writing without an outline requires discipline in the self-editing department, but it also allows much more creative freedom than writing with an outline. Flying by the seat of your pants opens your creative process to new possibilities you might never have thought of following an outline.

Best of all, it can help you avoid abandoning a project because you don’t know what to do next.

Of course, it’s not the only way to write a novel. For a different perspective, check out this defense of planning and outlining.

If you’ve never written a story without an outline, though, why not try it out now?

Are you a pantser or a planner? Let me know in the comments.

Whether you normally outline or not, give writing without one a try right now. Take any story idea you have, or choose one from this master list, and write for fifteen minutes without planning or plotting.

You can start with an idea for a character, a scene, or a setting. If you don’t have any ideas, use a random character or scene generator. Both are easily found with a quick online search.

When you’re done, share your practice in the comments. Then, leave some feedback for your fellow writers.

Tip: This exercise is also a great way to finish any project that you started but never completed, whether it’s a short story, the first chapter of a novel, or a blog post. Even if you can’t complete the project in one sitting, you can use this exercise to move it forward by one page.