I’ve recently read the short story collection – Diaboliad by Mikhail Bulgakov. As with all of his writing, these stories revolve around the fantastical, written in the recognizable Bulgakov style. There’s one common thread in them, though – he’s always referring to a Russian writer, mainly a predecessor.

In the introduction, the English editor explains that it’s the Russian writer’s tradition to pay homage to your predecessors, those that shaped the national literature and your early development.

It struck me as a wonderful tradition to be had. Not that writers around the world have never done the same, but certainly not as an established practice.

Obviously, every writer has been influenced by previous writers. One single work sometimes happens to determine all of your future career: what genre you’ll write, what direction you’ll take, what kind of style you’ll adopt, what themes you’ll like to develop further, which experiences are worth discussing, etc.

These influences can be subtly traced in one’s writing, or pointed out by the writer himself. At other times, they are hidden or unstated.

For example, I’ve just finished A Journey Around My Room by the 18th century writer, Xavier De Maistre and I learned that this travel parody of the writer’s inner experiences greatly influenced the one and only Marcel Proust.

Being familiar with Proust’s masterpiece, it wasn’t hard to track the inspiration he got for developing his unique observations on time from this rather tiny and not widely popular book.

So how does this paying-homage-to-a-writer work really?

It can be done in countless ways, such as: using one writer’s preoccupying theme and further developing it, rewriting your own version of a writer’s story, quoting lines by the writer in your writing, turning one’s writer into a character (thus bringing him to life), using one writer’s fictional characters in your own story etc.

Writers understand other writers the best. They change one’s life, they teach us, and they make us proud and jealous at the same time. They touch us to the bones; they lived in order to show what everyone is made of and can’t see.

And for that, we – writers – are most grateful. They paved the way for us, their contemporaries. Why not show them our gratitude by paying homage to them? They definitely deserve it.

Have you ever written something about a writer who greatly influenced you?

Pay homage to a writer who influenced you by writing about him or a character(s) from his work(s), or a theme(s) he/she has written about. Choose any way you want to go about this task. The purpose is to show gratitude to a special someone who touched you immensely.

When you’re done, post it in the comments. And support others with your kind and honest feedback. 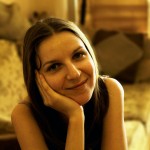 Sophie Novak is an ultimate daydreamer and curious soul, who can be found either translating or reading at any time of day.
She originally comes from the sunny heart of the Balkans, Macedonia, and currently lives in the UK. You can follow her blog and connect with her on Twitter and Facebook.