The Problem with Writing About People You Know, and 3 Ways to Solve It

This guest post is by Shanan Haislip. Shanan is a full-time business writer. She is also the webmaster at The Procrastiwriter, a blog about ways to fit writing in around a full-time life (without going insane). Follow her on Twitter at @Write_Tomorrow.

You're a writer, and you're also a person who has some family, friends and acquaintances, which means you'll almost certainly have to reconcile a basic conflict eventually: Writing about the people you know without ticking them off. 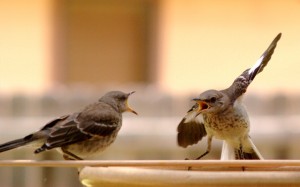 Photo by Chiltepinster, via commons.wikimedia.org

The sticky awkwardness of writing about real people isn't a problem reserved for nonfiction writers. It happens to fiction writers, too. When The Great Santini was published in 1976, American novelist Pat Conroy described his family's reaction to the fictional work this way:

When The Great Santini came out, the book roared through my family like a nuclear device. My father hated it; my grandparents hated it; my aunts and uncles hated it; my cousins who adore my father thought I was a psychopath for writing it; and rumor has it that my mother gave it to the judge in her divorce case and said, “It's all there. Everything you need to know.”

Writing about people you know can get uncomfortable quickly. A fiction writer might say, I hope my boss doesn't realize I made him the ruler of the underworld in this story, or I might be looking for a new job soon. Or When this is published, a nonfiction writer might worry, some of these people might never talk to me again.

Just changing names or a few details here and there isn't enough to successfully address these issues. (Even writing only positive things doesn't always work!) Here are five less-conventional ways to get what you want on the page without getting disowned by your family, dumped by your friends, and most importantly, losing the essence of what you're trying to say.

1. Make 'em zombies (that is, make them concepts).

I recently received this rather flippant, “Make 'em zombies” piece of advice, and I thought it was ridiculous.

Then, I read part of a novel where the writer compares his main character's hometown, a beautiful city on a river, to a woman. Not just to a woman's curves or a woman's beauty, but to a fully realized, anthropomorphized being. Through his characterization, that city by the river began to live and breathe. It had moods, it mattered, and it played a pivotal role in the plot.

That's when I realized what “Make 'em zombies” meant—take the essential realness of your real-life mom, spouse, boss, little sister, whomever, and roll their touchstone qualities into something else (not someone else) in your story. It could be a city, a structure, a storm or anything that's affecting and real to your characters. Even zombies, because why not.

2. Spread the character around.

The unique qualities of certain characters can be critical to your story's movement. Maybe your tale centers around a young boy's quest for manhood, and putting  your own father's powerful personality into your boy character's life would be the perfect plot device. But you need the unsavory aspects of your father's personality too, like how his roaming eye for the ladies led to your parents' divorce, to drive your young boy character's inner conflict. What do you do?

Try distributing pieces of your dad's personality among a few characters. Give your boy an older brother and an uncle, and give both a trait from your father that's important to the story. The older brother has the domineering personality, the uncle has an eye for the ladies, and you've stayed true to the traits that motivate your character without putting a real person's past under a spotlight.

Shifting your real-person characters around in time, or changing their age, helps make otherwise faithfully rendered people appear unfamiliar. If your story needs a shy, retiring woman with a mysterious past, and you've found such a woman—a mom in your toddler's playgroup—why not place her somewhere else in time? Give some of her traits to a childhood friend, a grandmother, or an school playmate.

But Before You Do Any of This, Nail the Essence of Your Story

I have a quote from novelist Anne Lamott tacked to the wall next to my writing desk. In part, it says:

Tell the truth as you understand it. If you’re a writer you have a moral obligation to do this. And it is a revolutionary act—truth is always subversive.

The debate between truth and honesty is a lively one among writers, but in the end, both depend less on the faithful rendering of any one of your characters, and more on the note the story strikes with you and your readers. Once you decide how you want your readers to feel, you can better see how your characters should serve their purpose. And you'll know exactly how to stay true to your story and honest about what's essential in your characters, without revealing more than you're comfortable with.

And try to find one willing soul.

Some people are surprisingly okay with being written into a story, even when they're a fully fleshed-out character, warts and all. Try to seek out these people when you can, and approach the topic of writing about them carefully.

Here's my experience: If I have any trepidation at all about asking a subject if they'd mind appearing in one of my writing pieces, they're probably not the right ones to ask. So I apply the techniques above.

Have you ever written about a real person in your life? How did they react?

Think about some of the compelling people you've met in your life. Have you ever used them in your work?

Take fifteen minutes to write about someone you know using one of the techniques described in this post, or a new technique of your own invention (surprise us!). What do you think of the result?

And as always, if you practice, be sure to comment on others' practice pieces with your thoughts and feedback!