The Ideal Schedule to Become a More Productive Writer

This guest post is by Blake Atwood. Blake’s most recent book, Don’t Fear the Reaper: Why Every Author Needs an Editor, is currently available for free in exchange for your honest review through Story Cartel (Click here to download it). Blake is an editor and ghostwriter with EditFor.me. You can follow him at BlakeAtwood.com or connect with him on Twitter (@batwood).

I assume it was a typo. It should have been “The early bird gets the word.” Why? Because I believe that writers who want to be more productive need to start getting up earlier.

Now, before the night owls start hooting at me, let me make my case—a very unscientific and highly personal one. 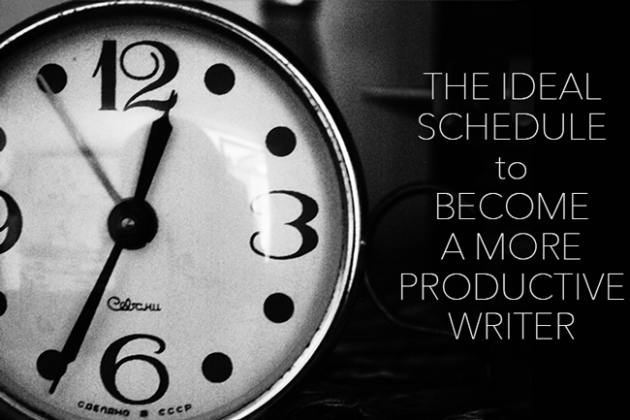 PinTwo years ago I had an idea for a nonfiction book that would need to be written and published within the span of six to eight months. At the time, I had a full-time job and hadn’t written a book before. Though I’d always had aspirations to write and publish a book, I was never even consistent in writing for my blog. If I couldn’t write 500 words every week or so, how in the world was I going to write 50,000 words in a few months?

Every fear and doubt raised its voice in my mind, battling for control of my time and my self-esteem. So what did I do?

I rose in the morning before fear and doubt did.

The Not-So-Ideal Schedule to Become a More Productive Writer

Prior to writing my first book, I had always considered myself a night owl when it came to writing. There was something soothing about the quiet darkness cloaking me in separation from the world so I could focus on my words.

Yet yawns would quickly begin to punctuate every other sentence. My mind would wander to what I needed to do tomorrow, what I hadn’t accomplished that day, or what problems I may have been facing at work.

Fear and doubt had welcomed two new friends into their club: distraction and weariness. Looking back, it was little wonder that I had accomplished so little. I’d fight through my day, then I’d sit down and fight at least four adversaries every night when trying to write.

Something needed to change. Unfortunately, that something was me.

As a wannabe-writer, I’d read the blogs, seen the infographics, and listened to the podcasts. After all, they were a surefire way to make me feel like I was becoming a writer, even though I wasn’t actually doing much writing.

Still, these resources are invaluable (when taken in moderation and effectively paired with consistent writing). They’re especially helpful when they all tell you the same thing. For me, at that time in my life, the overwhelming suggestion from every online avenue was: YOU HAVE TO GET UP EARLY.

How a Simple Productivity Shift Launched a Writing Career

Then one day I finally relented. I set my alarm for 5:30 a.m. and vowed to awake at that time for at least a week. I’d immediately go to my office, turn on my computer, and begin writing at 5:30 a.m. every weekday, for at least a week, and for at least an hour each day. A few months later, I’d written nearly 50,000 words and had successfully self-published my first book.

Since then, I’ve self-published another, co-written two books, ghostwritten another, and am currently working on another ghostwritten book.

It helps that I was afforded the opportunity to become a full-time freelance writer and editor last year, but still, if I’m writing for myself or for a client, I believe that my best writing occurs long before fear, doubt, and all their friends have risen.

I’m testifying to the fact that a change in my writing schedule—a night and day switch, if you will—has meant all the difference to my productivity, and even to my life.

But I know this is a contentious issue, and it’s not my aim to start a war between the early birds and the night owls. After all, both of them still eat worms.

I just tend to believe that early risers get the better worms.

How about you? Would you like to be more productive as a writer? Or are you happy with your productivity? Let us know in the comments section.

If you’ve found yourself unhappy with your productive output as a writer, shift your schedule.

Whether you’ll be changing to mornings or night, I recommend setting a particular start and stop time. After you’ve switched your writing schedule, report back on your findings, whether good or bad, in the comments on this post.

For now, consider answering this: Why do you write when you do?