3 Tricks to Build Suspense and Engage Your Readers

I am addicted to novels I can’t put down, to TV shows I can’t watch just one episode of, to short stories I have to finish, and to movies that keep me guessing until the very end. 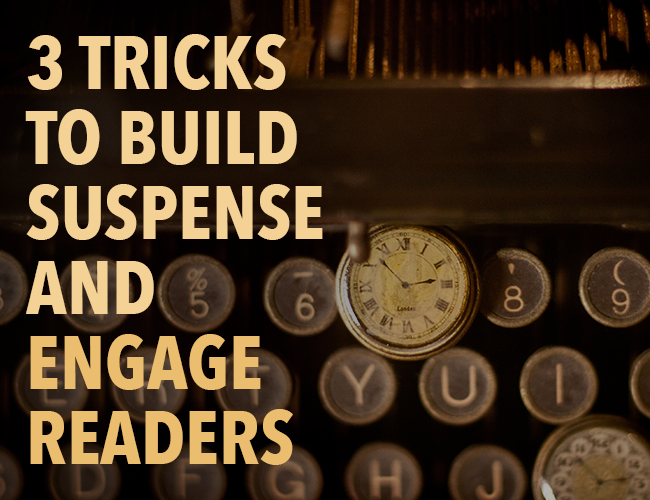 I love stories that grip me and demand my attention. I am on an unending hunt for them and for the suspense they make me feel.

As a writer, these are the types of stories I hope to create—stories that pull the reader to the edge of his seat and keep him there until the last page.

I’m constantly on the lookout for tools I can use to build my readers’ engagement in the story. I want them to become so engrossed in the plot they can’t walk away from it. I want my stories to be like that kid in third grade who refused to leave you alone until you realized that your only recourse was to become his best friend.

This has become increasingly difficult with my current project. I’m working on the second book in an urban fantasy series. The first book was published earlier this month.

For the second book, I’m trying not to use the suspense-building tools I did in the first book because I don’t want my readers to grow wise to my tricks. Few things are worse than figuring out what a story is going to do before it does it because the magic is gone.

Here are three suspense-building tools I’ve been playing with recently:

1. A Race Against the Clock

One method for building reader engagement is putting an artificial time limit on the story.

A cop needing to solve a case can be engaging an engaging story, but a cop needing to find an answer in three hours or the suspect walks is a story that carries with it a much deeper level of suspense.

We can heighten the suspense of our stories by forcing our protagonists to race against the clock.

In this narrative-obsessed culture, readers are instinctively wise to storytelling tricks. As authors, we can use this knowledge against our readers to increase their engagement in a story. One way this can be accomplished is by dropping a hint of something early in the story that will be used to solve the mystery in the end.

If two characters have a conversation about a musket that is hanging on the wall, for the entire story, readers will watch diligently for the musket to be fired.

If a character with a special skill is introduced in chapter two, readers will wait for the opportunity for that skill to be needed.

Drawing attention to items or people early in the story and alluding to their connectedness in the future of the narrative can be used as a tool to draw readers in.

“
Draw readers in by hinting early on at something that will be important later in the story.
Tweet this
Tweet

At the same time, we need to be careful with this tool. Readers will only tolerate so much of this. Additionally, if we show readers something early in the story, it better show back up later or readers will be unsatisfied.

Providing readers with a puzzle to solve will engage their mind in the narrative. Sometimes the best way to do that is to give them two things that seem unconnected and force the protagonist to figure out how they relate to one another.

This is often used in murder mysteries. The victim of the crime was an upstanding citizen who loved his wife and kids. He also enjoyed online gaming and occasionally went jogging late at night. Readers will naturally begin to hypothesize how all of these elements might have played into his murder.

This can tool can also be used in love stories. The college freshman see the man of her dreams across the room and wants to know more about him. By asking around, she discovers that he plays lacrosse and has a strong group of friends he likes to hang out with, but every Saturday he goes on long walks alone through a rough area.

Because this long walk is against his stereotype, readers will want to know how this revelation is connected to the rest of the story.

The Challenge of Writing a Page-Turner

Telling stories people can’t put down is a difficult feat. Racing against the clock, hinting at solutions, and connecting unconnected things are three methods we can use to increase reader engagement in what we are doing.

What other methods do you use to build engagement in your stories? How do you keep your readers on the edge of their seats? Let me know in the comments.

Today, engage your readers with a fascinating story. Take fifteen minutes to write a scene using one of the three tools above: hinting at a future solution, connecting unconnected things, or putting a protagonist in a situation where he or she needs to race against the clock.

When you’re done, share your scene in the comments below. Don’t forget to read and comment on your fellow writers’ scenes!