What Most Writers Don’t Know About Screenplay Structure

This guest post is by Alex Bloom. Alex founded the screenplay consultancy Script Reader Pro with the idea of hiring only working screenwriters and filmmakers. They offer a wide range of actionable script coverage services and a hands-on screenwriting course designed to cut out much of the “fluff” found in the world of screenwriting.

Do you struggle with screenplay structure? Especially sustaining momentum in that long second act? 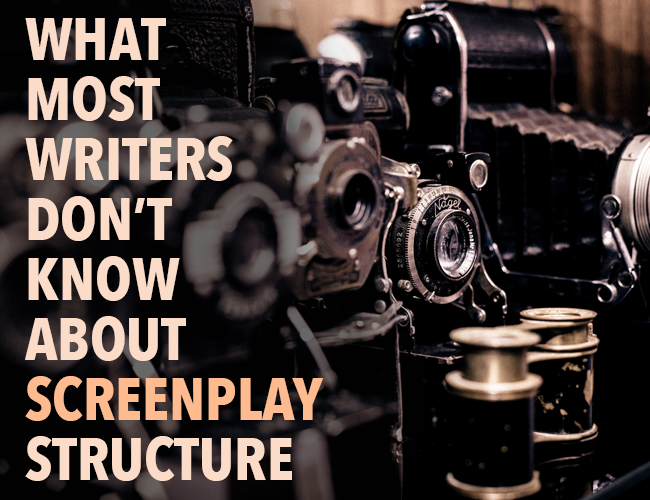 When learning how to write a script, writers are overwhelmingly taught that screenplay structure is all about three acts. But is this the easiest way to structure a screenplay? Or even the correct way?

The three act paradigm goes something like this: A protagonist is faced with a problem in act one (set up), attempts to solve it in act two (confrontation), and fails or succeeds at the end of act three (resolution).

“
Screenplay structure: protagonist faces a problem, attempts to solve it, and fails or succeeds.
Tweet this
Tweet

The problem with this three act formula, however, is that it often leads to writers running out of steam in act two as they try to fill it with “conflict.” This means act two becomes a series of disconnected events that aren’t really connected and seem to exist just for the sake of “things happening.”

This happens when screenwriters focus too much on traditional three act structure and ignore the building blocks underneath each act—sequences.

Each act is also made up of sequences which in themselves have a beginning, middle and end and so can be considered “mini-movies.” At the beginning of each sequence the protagonist is often presented with a goal to achieve, and by the end they’ve either succeeded or failed, just like in an act.

Breaking down each act into sequences makes it much easier to plot the protagonist’s journey through the script—especially during that long expanse of “rising stakes” during act two.

In traditional three act structure, we get only five major turning points:

If we use sequences to underpin these turning points, though, we get seven:

Each sequence runs for approximately twelve to fifteen minutes and ends with a climax that relates to either one of the five original turning points or one of the two new ones. Each sequence is also given an identifying letter from A to G and breaks down like this:

An Example of Sequences

I’m going to use Bridesmaids, written by Kristen Wiig and Annie Mumolo, for this example.

Sequence A ends with the Call to Action.

In Bridesmaids, we’re introduced to Annie and her underwhelming life. The climax of this sequence is also the Call to Action of the whole movie: best friend Lillian asks Annie to be her maid of honor.

Sequence B ends with the Act One Turning Point.

This is often a decision the protagonist makes or something that happens that reveals the real conflict. In Bridesmaids, Annie realizes Helen’s a major rival after they try to out-do each other’s speeches.

Sequence C ends with the Act One Decision Success or Failure.

This moment signifies the result of the protagonist’s first attempt at solving the problem established in act one. Sequence C in Bridesmaids revolves around Annie’s choice to take the girls to a Mexican restaurant before the dress fitting. It ends in disaster when everyone gets diarrhea.

Sequence D ends with the Midpoint.

This is often a major reversal in the protagonist’s fortunes which forces them to carry on with a quest that’s now even more difficult to accomplish. For example, Annie ruins the Vegas trip and loses her maid of honor duties.

Sequence E ends with the Midpoint Decision Success or Failure.

Like the Midpoint, this is often another huge twist in which things either get temporarily better or temporarily worse. For example, after ruining the trip to Vegas, Annie then loses her love interest, Rhodes; gets fired; and moves in with her mom

Very often this is the protagonist’s worst moment in the whole script because they wind up worse off than they were at the beginning. This is where Annie freaks out at the bridal shower and falls out with Lillian.

Sequence G ends on the overall climax to the movie.

This sequence is the stage for the “final test” the protagonist has to pass, and at the end they either succeed or fail. Annie succeeds at the end of Bridesmaids, as she resolves her differences with Helen and finds Lillian, and the wedding goes off without a hitch.

Dividing a screenplay up into sequences means conflict becomes easier to write as you’re able to break down the protagonist’s quest into mini goals for them to achieve. This comes in especially handy during that long stretch that needs filling with conflict in act two.

Try it out to hook your viewers from the start and keep them invested until the very end.

What do you think of this way of looking at screenplay structure? Let me know in the comments.

Today, you have two choices.

If you’re working on an outline or synopsis of your screenplay, spend fifteen minutes going through it breaking it down into sequences. Have a rethink about how your protagonist could make their way through seven “mini-movies” rather than three big acts.

Adding sequences A, B, D, F and G should be fairly easy, as they correspond to turning points you should already have. When it comes to sequences C and E, though, you may need to tweak the story a little so your protagonist works toward either a success or a failure after the Act One Turning Point or Midpoint.

If you’re not working on a screenplay, take fifteen minutes to try outlining a story using sequences. Pick one of these story ideas, or come up with one of your own to use.

When you’re done, share your writing in the comments below, and be sure to leave feedback for your fellow writers!