This guest post is by Deena Nataf. Deena is a magazine and book editor with thirty years of experience. Besides her editing, book mentoring, and manuscript evaluation business, she runs BulletproofWriting.com, which helps writers make their mark on the world through hands-on posts on writing techniques and tips for the writing life. Today she's giving away a free copy of her guide, “13 Grammar Mistakes You Can’t Afford to Make…and How to Avoid Them.” Thanks Deena!

Looking for a way to achieve an edge that will raise your writing to the top of an agent’s or editor’s inbox? Dreaming that your pitches, cover letters, query letters, and actual prose will stand out and be noticed? Just want to be taken more seriously as a writer?

It’s a lot easier than you think. 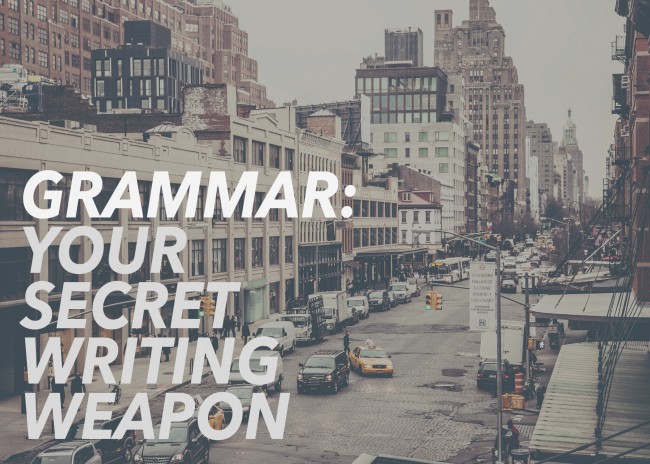 There are a lot of writers out there whose books are being published in one way or another. There are thousands of bloggers with gigantic subscriber lists whose posts are appearing in online journals and magazines. But the truth is…

Most of the writing is pretty average.

The Unfortunate Truth about Writing Quality

To be perfectly honest, average will not get you a contract with a major publishing house or periodical. In the blogging and online magazine world, however, it doesn’t matter as much—just look at almost any blog in existence. In my opinion, this is a real pity. Why is this happening?

Online gatekeepers (and those in the vanity press and self-publishing business) have become so used to mediocrity that many of them don’t know the difference between good enough and remarkable anymore. Their eyes are permanently glazed over. You must, therefore, give them a virtual kick in the pants to wake them up and get them to take notice of you.

You need a secret ingredient.

You’d better sit down for this

Okay, don’t panic. Take a deep, cleansing breath, and stay with me.

“
Grammar is one of the elements that close the gap between average and superlative.
Tweet this
Tweet
Happily, though, there is absolutely no need to learn a million rules and to memorize all the past participle/pluperfect/subjunctive stuff. I promise.

I could go on and on about all the grammar mistakes I see (and I cover them on my blog), but let’s just start with my favorite.

Don’t ask me why, but this one sends chills up and down my spine when I see it done wrong. It’s bad enough when computer geeks and other techies screw it up, but I’ve seen even some of the big guns make the who/whom faux pas, and even (gasp!) writing blogs. Every time I see it on one of these blogs I want to yell, “You went to Princeton, for crying out loud! What is wrong with you?”

It’s pretty easy to make the who/whom mistake, but it’s even easier to correct it. Here’s the only hack you’ll need:

“
Substitute he or him for who or whom.  If it’s he it’s who, if it’s him it’s whom.
Tweet this
Tweet

How brilliant is that?

Who/Whom on the Master’s Level

This one’s far more tricky than the Bachelor’s-level examples I gave you above. Let’s do it together:

I rest my case.

This requires another mini-grammar lesson, which I call the ‘Tis I Rule. It goes like this:

Hello? Who is it?

If you can answer ‘Tis I for a question, go for the “who.”

British and Other Sundry Authorities

According to the British English section of the Cambridge Dictionaries Online, you can use “who” instead of “whom” when you are asking either who did something or to whom something was done, as well as in “indirect questions and statements” (huh?). I will quote them here because their explanation is classic. They even employ the Royal We. Read this with a British accent:

“We use who as an interrogative pronoun to begin questions about people, [and] we use who in indirect questions and statements.”

Love it, but who cares what an interrogative pronoun is? In any case, as a red-blooded American I beg to disagree with Cambridge. Here are two of their examples:

(Okay, don’t trust me. See http://www.elearnenglishlanguage.com/blog/english-mistakes/who-vs-whom/. This is what they have to say:

Or take a look at http://www.grammar-monster.com/lessons/who_whom.htm. They say:

You Are Now on the Road to Bigger and Better Things

There is no such thing as superlative writing without superlative knowledge of grammar. It is part and parcel of segueing your first draft into a finished and publishable manuscript or article, and another step on the path toward an acceptance letter. Actively pursue that knowledge, and you’ll find yourself standing out from the crowd.

Do you have any grammar pet peeves? Let us know in the comments below!

Put on your editor’s hat and spend 15 minutes skimming through the most recent posts you read from your favorite bloggers (including The Write Practice!). Find as many who/whom mistakes as you can and correct them. Put the corrected sentences in the comments below. It will be interesting to see who gets the most…or is it whom gets the most? You tell me.