How Do You Sell 100 Million Copies of a Book?

Recently, as I was in the middle of revising my book, a question occurred to me: “How do you sell 100 million copies of a book? Is there a way to reverse engineer that kind of success?” Because if we want to reach readers with our stories, we need to know how to sell books. 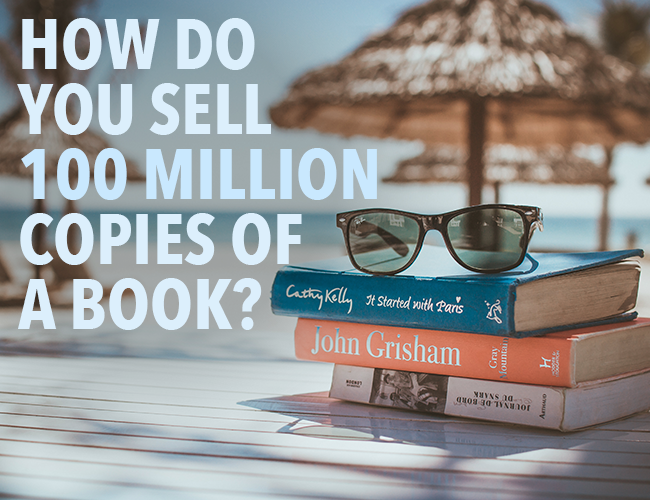 In this post, we will dissect what makes the top best-selling books of all time books so popular, and then look at how we can apply those lessons to our own writing.

“How do you sell 100 million copies of a book?” It’s an interesting question, right? One we’d all love to know the answer to.

“
To sell 100 million copies of a book, you have to start with a really amazing book.
Tweet this
Tweet

I found that there are only nine books that have sold over 100 million copies (excluding religious, ideological, philosophical, or political books), and looking over them, I found that they have five criteria in common.

They’re not quite rules, because not all nine books follow them. In fact, only one of the five criteria is found in all nine of the books.

However, if you want to know how to sell books — and sell a lot of copies of your books — you should consider paying attention to each one of them.

The Best-Selling Books of All Time

Have you read all of these? Do any surprise you? Let me know in the comments.

To sell 100,000,000 copies of your book, you don’t need to write about sex. That might help your otherwise midlist book sell more copies, but it won’t get you on the list on its own.

In fact, only three of the books on the list of nine top-selling books have any romantic element at all — and one of those is about an old man!

Realism needs to get realistic.

Sadly, for all the realists out there, only one book on this could be argued to be part of the realist genre. The rest all have elements of the fantastic.

I was an English major, and I spent my high school and college career, and even after, studying serious books. However, none of the books I studied in school end up on this list.

It’s not that serious literature isn’t important. It’s just that it doesn’t have large enough of an audience to sell 100 million copies or more.

How do you write a bestseller — no, a mega-bestseller? What do these nine books have in common?

As I looked closer at the nine books on the list of top bestsellers, I realized there are five criteria they have in common:

Five of the nine books were originally written in English. Each of the other four were written in a different language: Spanish, Portuguese, French, and Mandarin Chinese, making English by far the most popular language for mega-best-selling books.

This isn’t fair, of course.

In a fair world, a book would have the same chance of becoming popular whether it was written in Hindi, Spanish, Arabic, or any other language. But that’s not what’s happened on this list.

Unfortunately, if you don’t speak English, or if you write in another language, following this “rule” requires a tremendous amount of effort. Some people were born into this advantage, but others have to work harder to achieve it.

That being said, this is the most tenuous of the five “rules,” and it probably won’t last very long. English is only the third most spoken language in the world, behind Chinese and Spanish. I believe someday soon, there will be more mega-best-selling books by non-English speakers than English ones.

2. Write for Children or Young Adults

Five of the nine mega-bestsellers were written for children or young adults (and you could make an argument that six are, since the protagonist of Dream of a Red Chamber begins the story as a young adult).

Alice is seven. The little prince is a young boy. The protagonist of The Alchemist, Santiago, is repeatedly called “the boy.” Harry Potter is eleven in The Philosopher’s Stone. Bilbo Baggins, in the The Hobbit, is fifty years old, but first, he’s a young fifty, and second, Tolkien intentionally wrote The Hobbit as a bedtime story for his three young sons.

If you want to sell 100 million copies of your book, write for kids.

3. Set Your Story in Two Worlds

This was the most surprising and important realization I had as I researched this list. Here’s why:

This is most apparent in Alice in Wonderland, which invented a whole vocabulary to talk about alternate dimensions. Going “down the rabbit hole” has become cliché for entering a second world, and it all started with Lewis Carroll.

Many of the others have equally obvious second worlds:

Some of the others are less obvious, though still present:

Moreover, if you look at the books further down the list of top-selling books of all time, you’ll see that a huge majority of them have the same contrast.

4. Use a Whimsical Tone

Six of nine of the best-selling books of all time have a whimsical tone.

And it makes sense, right? Because books that take themselves too seriously exclude people. Serious books are important, just as books for adults are important. However, if you want to sell a lot of copies, you’ll be much more successful if you don’t take yourself too seriously.

5. Write in the Bildungsroman genre

Up to seven of these nine books are bildungsroman (depending on how you interpret them).

Bildungsroman is a literary genre that basically means “coming of age” story. They are almost always stories about a hero going from innocence to experience.

A few other features of the genre:

Note that most fantasy novels are bildungsroman, but this genre also includes books outside of the fantasy genre.

It’s Not About Selling a 100 Million Copies

Yeah, it would be nice to sell 100 million copies of your book. Of course it would.

The point isn’t to sell 100 million copies, though. It’s to write a book that brings meaning to the lives of your readers.

And if I’ve learned anything from studying these nine books, it’s that these five guidelines will help you write a book that connects with readers.

Can you apply these to your own novels? Let me know in the comments.

Take fifteen minutes to write. Then, share your world-hopping story in the comments below. Be sure to leave feedback on other writers’ budding mega-bestsellers!