How to Write Similes That Shine

Today’s guest post is by Lesley Howard. Lesley is an MFA candidate in fiction at Warren Wilson and has been published in regional and national journals, including Under the Gum Tree, and the 2015 Lascaux Prize Review. Her reflections on the writing life are at artofpractice.com and you can follow her on Twitter @LHowardwrites.

If you’re anything like me, you hope in your heart of hearts that your writing will reveal a Great Truth to your readers, that it will open a doorway to compassion and understanding that will ripple out to change the world. Ah! 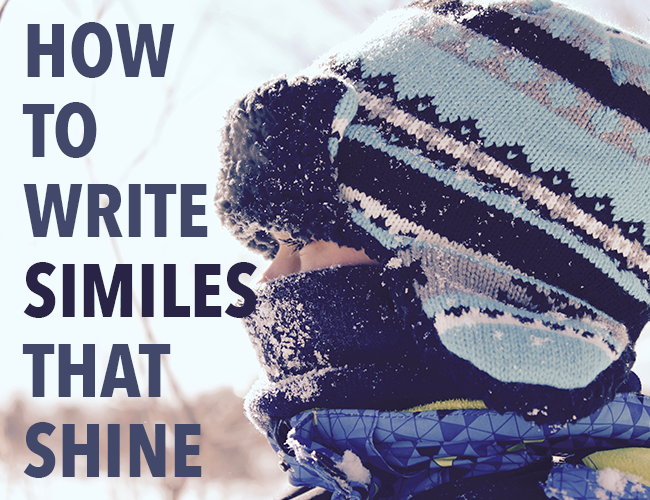 The authors who have been most effective in ushering me to that doorway are those whose writing reveals connections between images, ideas, and sensations I otherwise would have missed. Like Annie Dillard’s terrific simple line:

How did Dillard come up with such a lively sentence, one that bridges two physical sensations (cold and biting) and scent (pepper)? Does she own a magic wand of concision and beauty?

I’m betting she doesn’t have a magic wand, but that she does have a keen eye and a willingness to play around with making similes, comparing unlike sensations until she hits on a transformative combination. Patience and persistence in crafting similes pays off when our writing glimmers with their magic.

A danger inherent in similes is that their overuse leads to bad magic: cliché. Looks like a drowned rat. Hot as hell. Tough as shoe leather. These comparisons have been made so frequently that they’ve become meaningless.

No reader slows down to wrap their head around what a drowned rat actually looks like. Pause to imagine such an unfortunate creature. Pretty wet and soggy, right? It’s a great image—but one that no longer registers with readers.

Which is why a new simile can magically transform writing.

Is simile the same as metaphor? Nope—although both are considered figurative language, a metaphor only suggests a comparison between disparate things. It’s an indirect connection, such as the trees waltzed in the breeze. That trees could be like dancers is implied by waltzed.

Jane’s hair is like a mound of pale blue cotton candy. Because this isn’t a common or overused comparison, it avoids cliché.

And notice what else happens: by comparing hair to an artificially colored sweet treat, the writer gives the reader visual, textural and flavor sensations. On a subconscious level, many readers in western cultures will likely also associate Jane with a fair or street festival; there’s a good chance it’s a pleasant association.

And thus with one simile, the writer has planted multiple layers of association in the reader’s imagination. Magic!

The Key to Fresh Similes

So how do we write fresh similes to enrich and deepen our writing?

Because effective similes compare dissimilar things, like visual images with sounds, I made myself a crib sheet of the senses in combination with each other. I try work my way through it on a monthly basis, as a regular part of my writing craft practice.

For example, one of my current protagonists is, in my mind, quite short. So I compare this visual sense with all the others, and I share these in part because they do not all work! This is what playing around looks like for me.

This is my crib sheet:

Another approach I’ve been inspired by was presented by Bret Anthony Johnston’s craft exercise in Now Write! edited by Sherry Ellis. This version is a fill-in-the-blank method—I’ve included a couple starter suggestions below—but the principle is the same: compare unlike senses.

When he got under the hot shower, his hair sounded like _____.

Because I’ve found simile-making often uncovers different levels in my writing, I recommend playing around with similes that are grounded in the topic(s) of a current project. If you’re writing about rocks, compare the way rocks look with sound, taste, touch, and smell. Invent some fill-in-the-blank starter sentences that address your topic.

Be as specific as possible when you play; “skunk” is more likely to trigger a response in readers than “stinky.”

And when you give a character dialogue that includes a simile, consider their life experiences, and how those will inform their comparisons. An eighty-year-old retired bank robber will compare different objects and senses than a twelve-year-old skateboarder.

“
Play around with words and ideas until you hit upon a simile that shines.
Tweet this
Tweet

I find my playtime with similes to be flat-out fun and an easy antidote to every writer’s occasional or regular bouts of procrastination. On the days I’m avoiding my desk, I tell myself: five similes about your current piece. Just write five similes.

More often than not I’m surprised or intrigued by what emerges as I play with simile, at which point I re-perceive my current piece. Just as similes open doors for our readers, so they may open our writing practice. Ah.

Have you ever read a simile that resonated with you and stuck in your mind? Let me know in the comments.

Set your timer for fifteen minutes and work through as many sense-to-sense comparisons as you can using the crib sheet above. You can use the topic of your work in progress as a place to start, or write similes about the things you experience as you walk along the beach.

If you have extra time on the clock, complete the four sentence starters I’ve given—and invent some specific to your work in progress!

When you’re done, share your similes in the comments below, and leave some thoughts on your fellow writers’ comparisons, too.