Six Elements to a Story that Won’t Get You Slapped

Since we're talking about story today, why don't we kick it off with one. As you read, see if you can identify the element of storytelling. 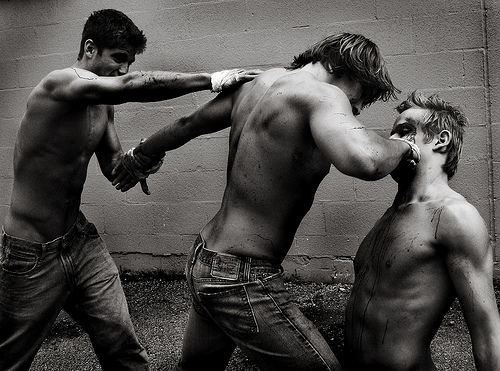 I walked over to Tommy and slapped him in the face.

Some background: Tommy was telling us a story he had just written. It was really bad. He needed a slap.

On Tommy's face was the red imprint of a hand.

My hand stung, but I felt good for standing up to bad storytelling.

Still, I wondered if I had gone too far.

The Foundation of Writing

Some people say there are five elements of story. Some say ten. I say six (for now at least). Here they are:

1. Action. What are the people in your story doing?

2. Dialogue. What are they saying?

3. Description. What are they seeing, hearing, touching, tasting, and smelling?

4. Introspection (also known as inner monologue). What are they thinking?

6. Exposition. What other information does the narrator (IE you) want us to know?

Here is the story above  tagged with its element:

I walked over to Tommy and slapped him in the face. ACTION

“You know why,” I said. DIALOGUE

Some background: Tommy was telling us a story he had just written. It was really bad. He needed a slap. EXPOSITION

There was an outline of a hand on Tommy's face. It was red. DESCRIPTION

My hand stung, but I felt good that I had stood up against bad storytelling. EMOTION

Still, I wondered what had come over me. INTROSPECTION

If You Don't Have Balance, You Get Slapped

About a week ago, Ryan posted a practice on An Interview With Tom Davis, Pt I. He had some good things to say, but his writing centered on just two elements. After I told him to try to touch on all the elements, his writing got much better.

Wiggle room is allowed, though. For example, some writers will focus on one or two of these more than the others.

If you favor a particular element more than the others, that's awesome. Part of discovering your voice is finding your own balance. Just don't forget the others.

Another important thing, most literary writers tend to avoid exposition. Use too much and you'll be accused of “telling” rather than “showing.” Exposition is the mayonnaise of storytelling. It can make for a moist, delicious sandwich, but too much will trigger your gag reflex.

Write a story about a schoolyard fight. Try to use all six elements of storytelling. If you don't, I'm going to come to your house and slap you. Seriously. I'll hack your email address, find out where you live, and slap you. Watch yourself.

(Also, I don't know actually how to hack an email address. In case you were legitimately worried. Hyperbole, people.)