What to do When Your Word Count is Too Low

This post is by Emily Wenstrom, a lit addict, movie junkie, and writer. Emily's short story zine, Wordhaus, recently began accepting submissions. You can also follow her on her blog, Creative Juicer, and on Twitter (@emilywenstrom). Thanks Emily!

When I completed the first draft of my first-ever novel last December, I promptly did a little victory dance.

And then I sat back down and took the word count, which completely killed my buzz. My manuscript rang in at little over 45,000—half the length of your average novel. Eep! I had a minor freakout. What was I going to do? 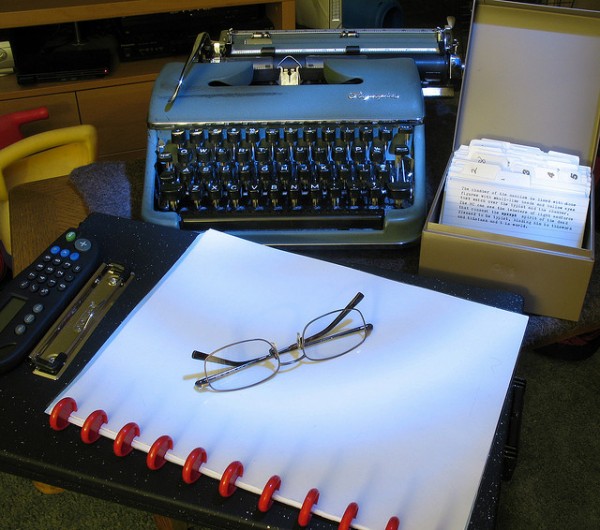 Adding up the words. Notice the calculator on the left? Photo by mpclemens.

But fortunately, rationality eventually returned. This was only a first draft, after all. Surely there was some room for development. Turns out, there was tons.

If you find yourself in a similar situation, here are five of the best ways I've discovered to beef up your word count without diluting your story:

It didn't take me long to notice a recurring issue with pacing in my first draft. There were many scenes where I had a big moment in my head itching to get out, and rushed the buildup. Now that it was all on paper, it was much easier to go back and fill in the missing pieces.

Over the course of the fifteen months that it took me to map out the plot and write my first draft, I'd managed to forget a few pieces of my original plan. Reviewing my outline was a helpful refresher. And it triggered some new ideas, too, pulling together the original concept and the story it matured into.

My first draft drew a pretty straight line start to finish. A happens, then B, then C. It lacked complexity. Where's the fun in that? Close review and some brainstorming gave me new ways to add obstacles into it with smaller events in between the major ones.

5. Create a Crowd with Minor Characters

My hero's a bit of a loner. He's alone for almost all of the story, as told in my first draft. It kept the story tight… too tight, I realized. Some parts of the plot pretty thin with just one character. By forcing him into more interactions with some of my side characters, I was able to make those scenes more dynamic. It also created more conflicting motivations for my hero, upping the tension.

By the time I got through assessing all these different ways to beef up my story, I was psyched about the stronger story that was going to emerge from it, and couldn't wait to get started.

It's taking me about as long to build out as it took to write my entire first draft. Doubling my word count and making all the changes to churn out my story into a full novel is requiring a lot of restructuring. Some scenes have been so cut up and messy they've become full demolition zones.

But when I look back over my reconstructed work, it's clear that a stronger story is emerging, and it's all worth it.

Have you ever come up well short of your word count goal? How did you handle it?

Is there a place in your work in progress that's reading a little thin? Take fifteen minutes and review it carefully. What's missing from it? Are the stakes high enough? Is the pacing off? Does it require more buildup? What can you do to make it stronger?

Share your observations in the comments to get the feedback of the community.