Last week, we lost an incredible novelist. Ursula Le Guin passed away at age 88 in her Portland home. 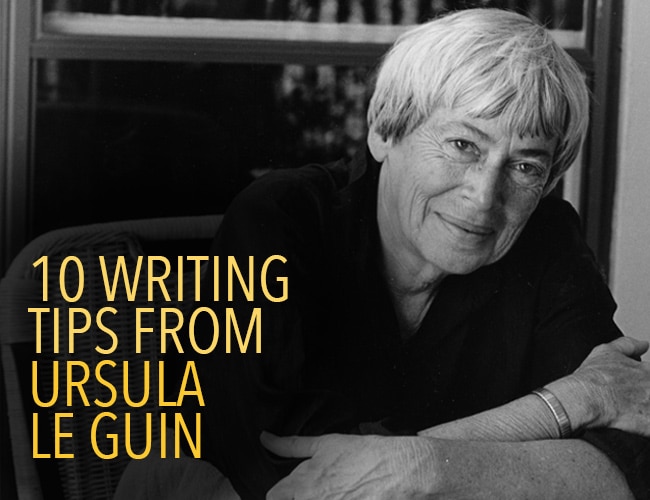 Photo by Marian Wood Kolisch, modified by The Write Practice

I've been reading Ursula Le Guin for a long time, since I first discovered The Earthsea Cycle, which reinvigorated my love for fantasy.

She's also famous for her science-fiction, especially The Left Hand of Darkness and The Dispossessed, and was one of the first to show the world that women can not only write great science fiction, they can often do it better than men.

Le Guin was a “genre” writer who constantly pushed the boundaries of what we think of as genre. Besides sci-fi and fantasy, she wrote poetry, creative nonfiction, and literary fiction.

We first shared her writing wisdom on The Write Practice back in 2014 when she was honored with the Medal for Distinguished Contribution to American Letters at the National Book Awards. That's a fancy sounding award that basically means she was the bomb (she really was). It's also just one of many awards she received throughout her career.

I honestly believe she will go down in history as one of the greatest writers, literary or otherwise, of the 20th century.

With that in mind, here are ten quotes from Ursula Le Guin on her process as a writer:

Thanks to “show don’t tell,” I find writers in my workshops who think exposition is wicked. They’re afraid to describe the world they’ve invented. … This dread of writing a sentence that isn’t crammed with “gutwrenching action” leads fiction writers to rely far too much on dialogue, to restrict voice to limited third person and tense to the present.

As for “Write what you know,” I was regularly told this as a beginner. I think it’s a very good rule and have always obeyed it. I write about imaginary countries, alien societies on other planets, dragons, wizards, the Napa Valley in 22002. I know these things. I know them better than anybody else possibly could, so it’s my duty to testify about them.

3. Do Your Job as a Writer, and Do it Really Well

But when people say, Did you always want to be a writer?, I have to say no! I always was a writer (tweet that, emphasis mine). I didn’t want to be a writer and lead the writer’s life and be glamorous and go to New York. I just wanted to do my job writing, and to do it really well. 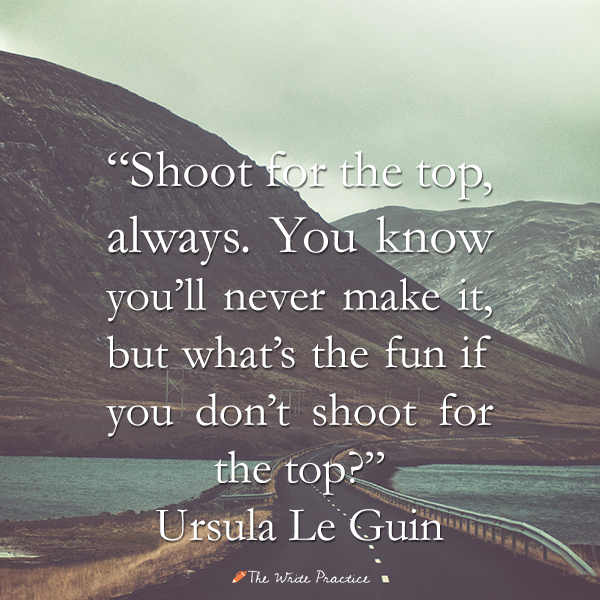 When asked what authors she measures her work against, Le Guin says:

Charles Dickens. Jane Austen. And then, when I finally learned to read her, Virginia Woolf. Shoot for the top, always. You know you’ll never make it, but what’s the fun if you don’t shoot for the top? (tweet that)

6. Learn From the Greats

It was Borges and Calvino who made me think, Hey, look at what they’re doing! Can I do that?

7. Writing Is All About Learning to See 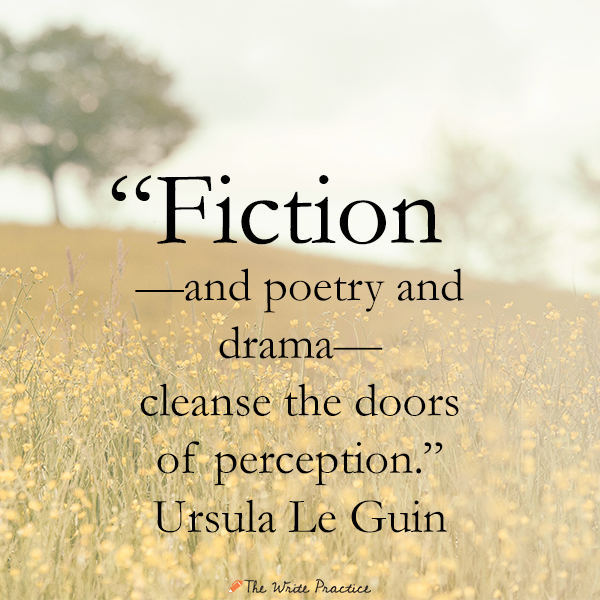 A very good book tells me news, tells me things I didn’t know, or didn’t know I knew, yet I recognize them — yes, I see, yes, this is how the world is. Fiction — and poetry and drama — cleanse the doors of perception. (tweet that)

I love this, by the way. It reminds me of Oscar Wilde's quote, “No great artist ever sees things as they really are. If he did, he would cease to be an artist.”

8. Begin Your Story With a Voice

How should you begin your story?

With a voice. With a voice in the ear. That first page I wrote, which the novel progressed from, is simply Lavinia speaking to us — including me, apparently.

9. Focus on the Rhythm of the Story

I want the story to have a rhythm that keeps moving forward. Because that’s the whole point of telling a story. You’re on a journey — you’re going from here to there. It’s got to move. Even if the rhythm is very complicated and subtle, that’s what’s going to carry the reader.

And one of [the things you learn as you get older] is, you really need less … My model for this is late Beethoven. He moves so strangely and quite suddenly sometimes from place to place in his music, in the late quartets. He knows where he’s going and he just doesn’t want to waste all that time getting there. … One is aware of this as one gets older. You can’t waste time.

How about you? What do you love about Ursula Le Guin? What has she taught you about writing? Let us know in the comments.

Use tip #5 and write like who you really are.  Write like a woman or a man or an American or an alien or an Ursula Le Guin or a Joe Bunting. Write just as you are.

Write for fifteen minutes. When your time is up, post your practice in the comments section. And if you post, please be sure to give feedback to a few other writers.