Why We Stop Writing: 3 Lies Writers Need to Stop Believing

How many articles, blogs, or books have you failed to write? Or have you ever started one of these projects and then hit a hard halt? Are you stumped at why you stopped writing? 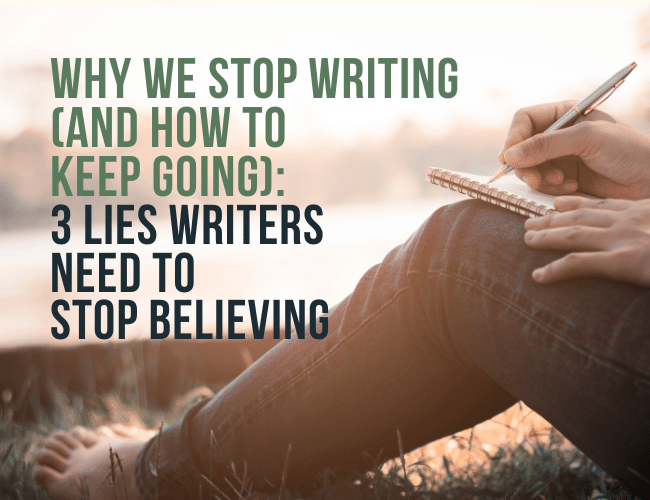 Eighty percent of the time writers stop writing is because of three lies they tell themselves.

Knowing what these lies are will help you notice them creeping into your writing process, which is the first step to preventing them from convincing you to quit writing.

This guest post is by Paul Angone. Paul is the best-selling author of four books, including 101 Secrets For Your Twenties and his newest book, 25 Lies Twentysomethings Need to Stop Believing. Snag free chapters of Paul’s books or order his newest book at his website AllGroanUp.com, and find Paul on Instagram @PaulAngone.

Why We Stop Writing (And How to Keep Going)

No matter how successful someone is, we’ve all faced experience with temptation to stop doing whatever we set out to do.

I know I have, and because of this, I began to question why sometimes I feel like I’d rather stop writing.

Stephen Pressfield in his infamous book The War of Art called this force “Resistance.” I call it “The Liar.”

Whenever you move towards doing important work, and especially when you’re being vulnerable through your words, the Liar is going to try and stop you. Every time.

I’m about to see my fourth published book released, this one titled 25 Lies Twentysomethings Need to Stop Believing, and yet, as I write about the lies, I’m still battling the Liar trying to stop me at every page.

Most of the time, these three lies will try to stop you from writing, which naturally will prevent you from becoming a successful writer. But finishing your book is a giant portion of what writing is all about!

Here are a few of the lies we need to recognize as writers and creators so that we can create the work we need to create.

3 Lies That Stop You From Writing

Writing is hard work, but everyone has something important to say, and everyone can finish a written work. That is, if you learn how to recognize these three lies, and then shut them out.

1. It Needs to Be Perfect

Have you ever heard of musicians like Jerry Lee Lewis and Roy Orbison? How about Johnny Cash and Elvis Presley? Do you know what they all have in common?

Sam Phillips. The same man, who also ran a small independent record label out of a hole-in-the-wall location in Memphis, Tennessee, discovered them all.

As a big Johnny Cash fan myself, I loved learning about this legendary producer in the book The Man Who Invented Rock ‘n’ Roll by Peter Guralnick.

What was one of Sam Phillips’ secrets to discovering some of the most iconic artists of the century? He didn’t look for perfection. Actually, he thought that perfection held people back.

“Perfect? That’s the devil. They should strike the damn thing out of the language of the human race.”

Elvis Pressley and Johnny Cash were not perfect musicians. Far from it. When Johnny Cash came in with his band of mechanics, they could barely even get through a song. But, as I talk more in-depth about in my new book, 25 Lies Twentysomethings Need to Stop Believing:

Sam Phillips would run the recording sessions in a completely uncontrolled manner. He didn’t want it to be forced. He wanted the musicians to keep trying, keep reaching, keep extending themselves past their own insecurities and fears that were holding them back, and just sing the way only they could sing.

Sam’s life motto, and what he was searching for in artists, was “perfect imperfection.”

He wasn’t looking for a polished musician that sounded just like everyone else. He was looking for the raw and original. Something that is hard to come by if we’re striving to be perfect. If you’ve ever watched the movie Walk the Line there’s a great scene of Sam Philips imploring Johnny Cash to sing an imperfect song that will truly “save people.”

While subconsciously I think we know “it needs to be perfect” is a lie, how many times do we stop ourselves while writing because something isn’t working right? It’s clunky. We can’t find the right words. So we stop instead of pushing through and finishing it.

It’s in those moments where we need to keep writing the most.

If we keep writing, we might reach a cusp to our breakthrough. We might actually write the masterpiece we’ve been striving to produce!

“
It’s at the exact moment we feel like giving up that we need to keep writing. It’s in those moments we can’t let lies like perfectionism stop use from finishing our books.
Tweet this
Tweet

It was when Elvis stopped trying to be perfect in his first recording session and at three in the morning that he started messing around with a song because he had nothing left to lose. And it’s in this exact moment that he stumbled across something that would launch his music career into the stratosphere in a matter of months.

Sam Phillips saw sheer perfect imperfection in Elvis, and knew he was witnessing someone truly unique.

Striving for perfection as we create is a perfect way never to create anything.

So ditch perfectionism, and focus on finishing what you’re writing instead.

Do you remember Bob Ross, the famous afro-sporting art instructor on PBS whose “Joy of Painting” TV show ran for a whopping thirty-one seasons?

I loved learning more about Bob’s life and told his story in Lie #1 of my new book under the lie of “Success Just Happens.”

In fact, he was so broke that he decided he could save money on haircuts by perming his hair and letting it grow out. Thus, his famous afro that turned out to be one of his first “happy little accidents.”

But here’s what really surprised me about Bob Ross, yet made complete sense: you know the magical painting that he’d finish every episode? The reality is, he had already spent months working on that exact painting.

That’s right, every episode Bob was completing a painting in real time, but he was referencing that exact painting off-screen that he’d already spent weeks and months perfecting. I elaborate on this idea in my book:

“The master magician is the least magical person in the room. What we see as magic is someone’s years and years of painstakingly perfecting their craft. The magician is probably just the hardest-working person in the room and has excelled the best at learning through failure to perfect a craft that looks flawless.”

As a writer, the idea that “I’m a failure” is waiting to attack at the first sign of a bad review or another rejection letter. Believe me, I know. I spent about eight years of re-writing and re-editing just to get the grand privilege of being re-rejected again and again.

Here’s the trick to dodging lie #2: getting a book published doesn’t mean there’s not new rounds of failure on the horizon.

What I didn’t realize when this lie got in my way was that failure wasn’t ruining my story. Failure was helping me write it.

Every rejection letter was challenging me to become better at my craft. Every rejection was getting me closer to the story that I truly needed to tell.

I was learning to create magic, even if the process felt not the least bit magical.

“
Failure won’t ruin your story. In fact, failure will actually help you write it and finish it.
Tweet this
Tweet

I’ve been so close so many times to just throwing in the towel and working a “normal” job again. When that happens, there’s one question I continually ask myself. It’s the one question that has kept me going:

“Who will I not be able to help if I give up now?”

When all visions of New York Times best-sellers and interviews with Conan O’Brien fade away, it is this question that keeps me going.

I know that what I am writing about what is important. I know, deep down, that people out there are going to need my books—even if I can’t convince a publisher in that exact moment.

But now that people have shared pictures of themselves discovering my book in a Target store, or when I’ve connected with hundreds of amazing readers in Iran who tell me how my book has changed their lives, I’m grateful I finished that book. I’m grateful to finish all of my books.

Because people need our stories.

That’s what keeps me going and gives me chills. That’s my reason for not quitting.

And I bet it will keep you going, too.

“Maybe your dream is not going to its grave right now. Maybe it’s being planted. The bigger the dream, the larger the impact, the deeper your roots need to go.”

Keep writing in truth instead.

Need a little more encouragement on how to keep writing (and beat these three lies!)? Check out Paul’s new book: 25 Lies Twentysomethings Need to Stop Believing.

And whether you’re a twentysomething, a thirtysomething, or someone looking to better understand and support them, snag free chapters or order his newest book on his website, AllGroanUp.com.

Why You Need to Keep Writing

These three lies will near up on you at inconvenient times and in unexpected places. Discouragement is all too familiar at some point in the writing process.

But people out there need you to keep writing. Ask yourself, “Who will I not be able to help if I give up now?”

Then dig down deep and listen to the truth.

We need your voice.

What has discouraged you from writing your book? Let us know in the comments.

Pick one of these three lies discouraging you from writing your book. Then, imagine a reader who desperately needs you to finish your book. Got them?

Now spend fifteen minutes writing a scene where your book saves their life, or journal about the conversation you have with this person after they tell you those magic words, “your book changed my life.”

When you’re done, share in the comments section, and tell us about the book you’re writing right now.