How to Write What You Know

When I first started writing, I was advised to “write what you know.” While the advice was well intended, it left me sad because I don’t know much, and what I do know isn’t exciting enough to build fiction with. 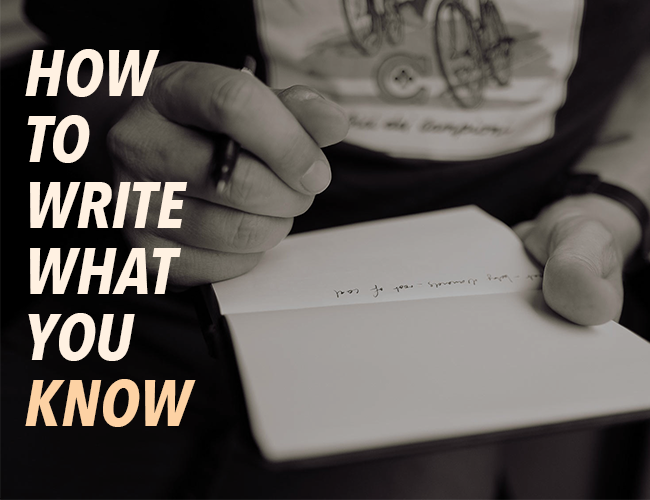 Then, one day, it started to click for me. While I may not be a dragon-slaying knight or a criminal-catching detective, the emotions I experience on a daily basis can be used to bring those worlds to life.

An Emotion I Know

Yesterday I was watching my twenty-month-old son play in our front yard. He was running as fast as he could across the grass. Like the toddler he is, his desire to cross the yard outpaced his feet’s ability. About half way to the end of the yard, he stumbled and tumbled face first into the grass.

As I watched him fall, an ache of fear formed in my stomach. I immediately knew that feeling was something I could apply to characters in my story. After picking up, dusting off, and comforting my son, I found my journal and went to work.

3 Steps to Write What You Know

When I want to capture an emotion from my real life and apply it to my fiction, there are three things I do:

Step One: Journal the Emotion

After I’ve had an experience I know will translate into my fiction, I spend five minutes with my journal writing it down. My writing isn’t polished or meant to be seen by anyone else. It’s just notes to remind myself of the feeling. For example, my notes on the experience I mentioned above might read:

“Saw son running. Son fell. Pain/ache in stomach as the fall happened. Not sharp, more deep. Like a moan. Muscles tensed to brace for his fall. Things felt like they slowed down. Didn’t start moving until he hit the ground.”

Journaling my emotions takes less than five minutes. This isn't something I do during dedicated writing time. Once I’ve got my description down, I’ll go back to my day.

Step Two: Meditate on the Emotion and My Character

As I go through my day, I’ll try to imagine my character experiencing the same emotion. How would he/she process it? What would bring that emotional response in them? For my character, what is the equivalent to seeing his/her toddler fall?

While taking the time to process the emotion through my character’s voice slows my writing down, it pays off in the end. I find that when I spend a few hours meditating on my character’s response, the scene I write later will be richer.

After I’ve journaled the emotion and meditated on how my character would experience it, it's time to write the scene. If I’m writing a longer piece (like a novella or a novel), I don’t worry about building the scene into the story yet. I just want to get the emotional experience out. I try to start writing in the moment and push all the way through the emotion. After I have the scene out, I’ll come back and connect it to the rest of the story.

For example, I’m currently writing a novel about two homeless superheroes. I know that later in the story, one hero is going to be captured while his partner is forced to flee. While my partner has never been dragged away by monsters, I know how my character will feel because I've watched my son fall in the front yard.

Even though I won’t be able to connect this scene to the rest of the work for a few months, because the emotion I needed was fresh, I went ahead and wrote the scene. As my retreating hero watched his partner fall into the hands of the enemy, time froze. A deep moan of pain formed in his gut as he saw the monsters drag his friend away.

You Know More Than You Think

We may not be genius detectives, or courageous knights, or homeless superheroes, but the emotions we feel are universal and, if we can capture them, can be used as powerful tools to bring our writing to life. I believe this is one way we can “write what we know.”

What techniques do you use to “write what you know”? Let me know in the comments.

Today, pause to meditate on an emotion you experience. Then, take fifteen minutes to apply the emotion to a character you are working on. When you're done, share your practice in the comments, and remember to leave feedback for your fellow writers.