Today’s guest post is by Michael Mahin. Michael is a repped screenwriter and children’s book author, with two books forthcoming from Atheneum and Clarion. He blogs about writing and dreaming big at MichaelMahin.com. He also runs a web design business that caters to building sites for writers, actors, and other creative types.

As all athletes know, whether you’re getting ready for a basketball game or a short jog, you need to loosen up. But for elite athletes, just like writers, loosening up isn’t just about warming up the physical body; it’s also about preparing yourself mentally for what is to come. 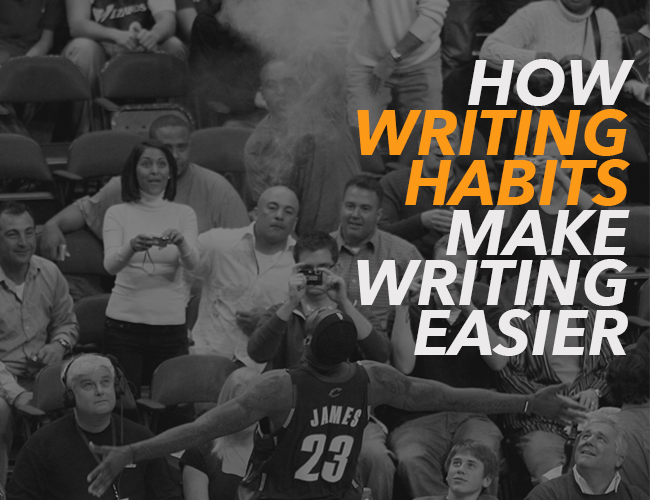 If you’ve ever seen basketball star LeBron James’ pregame “chalk toss” ritual, you’ll know what I’m talking about. You may not toss chalk before you write, but you can develop writing habits that will make your writing easier.

If you’ve read my recent guest posts, you’ll know that I’m obsessed with Susan Perry’s Writing in Flow: Keys to Enhanced Creativity (1999), an analysis of hundreds of interviews with award-winning writers. Based on her interviews (of everyone from Michael Crichton to Octavia Butler), Perry observed 5 common traits/ practices that most successful writers seemed to have in common.

I’ve talked about a couple of these key traits in my previous guest posts How to Be a Better and Happier Writer and How to Think Like a Great Writer. In this post, we’ll talk about what Perry calls “Loosening Up.”

Find a Way to Loosen Up

“To allow your creativity, your insights, your inner stories to spill over onto the page, you’ll need to work out—consciously or not—some way to loosen yourself up so it can happen.”

James’ “chalk toss” was as much a part of his warm-up routine as shooting free throws was. But whereas the free throws warmed him up physically, the chalk routine was a ritualized behavior that (consciously or unconsciously) helped him enter the mental head space of the game. If you’ve ever seen him do it, it’s almost meditative. (It also happened to be a great shtick for the audience.)

This same principle works for writers.

“
Writers can actually make writing easier by using rituals and routines to “loosen up” before they write.
Tweet this
Tweet

In her interviews with writers, Perry noticed that most had developed some sort of personalized ritual or routine that seemed to ease them into their writing.

Perry explains how these writing habits and rituals work when she writes,

“By their habitual nature, they [rituals] help you make the shift into an alternate consciousness and contribute to your creative process.”

So, while James’ chalk toss helped him get into the “game on” mood, a ritualized cup of coffee can similarly help a writer say “game on.” Over time, these rituals can actually become behavioral triggers that help you get into the writing head space before you’ve even begun writing.

Create Your Own Writing Rituals

If you don’t have a writing ritual, try initiating one. Pour a cup of tea before you write. Clean your desk. Read the paper. Write at a specific time every day. Listen to a song that puts you in the right mood.

“
Find a ritual you can do that signals to your brain and body that it’s time to write.
Tweet this
Tweet

On the other hand, if you’re in a writing rut, try changing your routine to find something that works better for you. Keep track of the outcomes so you can repeat the writing habits that have the best effect.

The key is finding what works for you.

Just like basketball players who warm up shooting baskets, prewriting exercises can help relieve anxiety about writing by occupying your mind with a familiar routine.

I used to start my writing sessions with a random exercise selected from a book. It helped counter my anxiety over what I should be working on by eliminating that choice. After I’d done the exercise, moving on to my “real” work was much easier.

One of my favorite prewriting routines is one that Ray Bradbury credits with helping him find his voice. (For more about Ray Bradbury and his classic book on the craft of writing, Zen in the Art of Writing, check out my blog post How Ray Bradbury Found His Voice and How You Can Too).

Bradbury’s “loosening up” routine was to get out of bed each morning, walk immediately to his desk, and write down any word or series of words that came to him.

“I would then take arms against the word, or for it, and bring on an assortment of characters to weigh the word and show me its meaning in my own life. An hour or two hours later, to my amazement, a new story would be finished and done. The surprise was total and lovely. I soon found that I would have to work this way for the rest of my life.”

Notice how Bradbury “loosened up” using a ritual (by writing this list first thing every morning) and a prewriting routine (in which he searched his list for a word or words to base a story on).

This is how Bradbury found his voice. How will you find yours?

What are your writing habits, rituals, and prewriting routines? Let me know in the comments, and I’ll share mine. Maybe the next Ray Bradbury is among us!

Take fifteen minutes to do what Bradbury did.

For the first five minutes, free associate a list of words (or images, or doodles, or whatever works for you). Don’t edit, and don’t stop for the full five minutes.

Then, for the next ten minutes, take one of those words (or a group of them) and use it as the basis for a story or poem. Don’t let yourself off the hook, but don’t feel like it needs to be anything longer than a warm up (unless you can’t help yourself).

Post your poem, story, reflections, or rituals in the comments below. And if you share, be sure to leave feedback for your fellow writers!