2 Ways to Beat Writing Procrastination and Finish Your WIP

We hear voices in our heads in the middle of the night. We see scenes in our minds like movies and are compelled to capture them on the page. We look around at the world and notice things, things other people might not see. Writing procrastination—well, that's just not in our vocabulary, right? 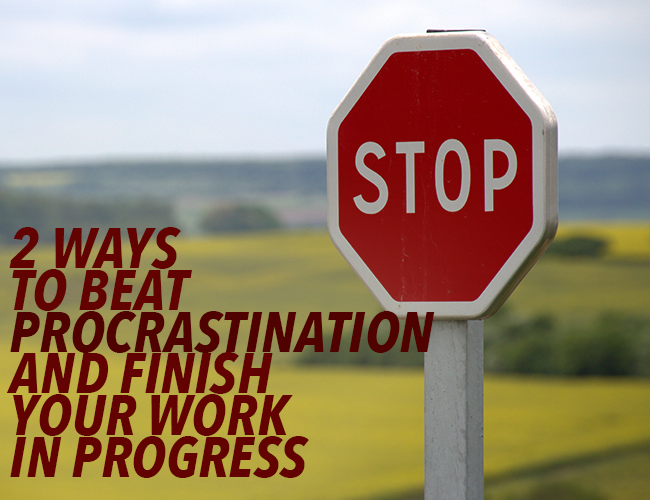 We are lovers of stories. We gasp at expertly crafted sentences. We smile at innovative turns of phrase. We’re left breathless at the fierce beauty of a story well told.

We are writers. And writers write, right?

The thing is, sometimes writers don’t write. Sometimes life gets messy and we make sacrifices for those we love. The season shifts and we have to bump other things up on the priority list. But then there are those times when we’re just plain procrastinating.

Can you identify with this?

I decided to write today, so naturally, I cleaned my whole apartment. #WriterProblems

There are many reasons we end up putting off our writing: distraction, lack of discipline and laziness to name a few. But, often, there’s a little more to the story.

Why Do We Procrastinate?

I’ve been procrastinating writing for my work in progress (WIP) for the past 6 months. After much writing procrastination and reflection I finally asked, “What do I think is going to happen when I sit down and open up my laptop?”

I didn’t truly believe I’d be able to write anything.

And that got me thinking. I’ve written before. Why couldn’t I do it again?

Well, one factor was that I was stuck. I didn’t know how to tackle the next chunk of my WIP. So, in my mind, trying to sit down and write was a guaranteed failure.

Maybe that definition was part of the problem.

Yes, books need words, but we don’t need to accumulate words for the sake of word count. We writers need to change the way we think about work, about progress, about creating.

It’s not just about getting words on a page. That’s one part of the creative process, but not all of it. Another essential component is something we were great at when we were kids.

Yes, daydreaming. Earlier today, I decided to face my procrastination head on. So, what did I do? Believe it or not, I didn’t sit my butt down in my chair and strain my brain trying to come up with an idea. That sounds a lot like creative constipation.

What I actually did was look through my notes and refresh myself on my story. Then I took my dog on a walk. On this walk, I listened to my sister talk about a book she’s working on. Then, I took a long, hot shower.

Why am I telling you this? Not because I’m a fan of over-sharing, but because it gives you the freedom to change your definition of “progress.”

“
Feeling stuck? Put down the pen, walk away from the keyboard, and go daydream.
Tweet this
Tweet

In the shower, I let different ideas float around in my mind. I remembered my biggest desire for my story—the most precious themes, characters, dynamics—but held my plot and the abundance of other story details loosely. I let it become fluid, taking nothing for granted. I toyed with things I’d considered fixed. I asked myself, “why not this?” “How about that?” “What happens if I modify this?”

And, lo and behold, after an hour of “not-writing,” I’d been more productive than I’d been for the last six months. Armed with some intriguing new dynamics, I now have fodder for my next writing session. I won’t have to strain or stare at the dreaded blinking curser. I’ll have things to play with.

Progress isn’t always words on a page. Progress can be looking at your story with fresh eyes. The new possibilities are inspiring. And inspiration is fuel—a necessary pre-requisite for forward motion.

Are You Stuck in a Rut?

The other huge reason why I was putting off my writing was because I was stuck in a mental rut.

In my WIP, I’ve been fixated on the notion that I have to write some sort of escape/chase/mad-dash-through-the-city scene. But do I?

Also, I actually have several scene ideas for the beginning of book 2 of the series. Why can’t I start writing those? Who says I have to finish book 1 before working on book 2?

And I skipped over several scenes in the beginning of book 1. Why can’t I go back and work on those?

Why was I so fixated on writing that specific chase scene? I don’t know. Sometimes we impose strange restrictions on ourselves that, when examined, aren’t necessary.

Was completing that scene actually required for making progress on my WIP? No, not at all. And once I realized that, I realized I did have ideas for what to write; just not in the order I’d initially thought.

So, the next time you find yourself procrastinating, try one or more of the following before moseyin’ on over to that blank page.

Sometimes the expectations we put on ourselves come from within. Sometimes they come from trying to replicate what we see other writers doing.

Remember that everyone’s writing process is unique. Don’t get me wrong; learning from the techniques of others is valuable. In fact, it’s a great starting point for beginners.

But if we expect to fit into another’s mold, we tend to feel ashamed when we don’t get the same results.

Using other people's processes is just a starting point. We have to discover our own. If the process isn’t working, tweak it.

Have you put any unreasonable or unnecessary limitations on yourself? On your story?

What are your feelings about what you need to accomplish with this draft of your WIP? What do you believe about how you must accomplish this? Is there another way?

Allow Yourself to Daydream

In the shower, taking a bubble path, on a walk, on your commute.

While doodling, free writing, chatting with a friend. Whatever.

Realize that daydreaming is not a waste of time. It’s actually critical to the writing process.

Remember why you want to write this story.

Don’t worry; you’re not making any decisions here. Play with your story. Let it be fun!

What kind of assumptions have you been making? About your story? About your process? Let me know in the comments section!

Think of your work in progress. Rather than writing a new scene, take fifteen minutes to free write about your story. Let your imagination wander, and jot down whatever comes to mind.

Some questions to get you started:

When you're done, share the highlights in the comments. Did this free writing give you any new ideas? Did it affirm what you already know about your story?

Don't forget to leave feedback for your fellow writers!