Writing Prompt: The Secrets We Bury

I recently finished a novel where a character hiding in a secret panel in an old house had lost consciousness and died. The only person who had an inkling of the hiding space was a child who grew up harboring the terrible secret. Secrets are a great way to add depth to a character, especially if the secret is on theme. Try this writing prompt and see what you uncover! 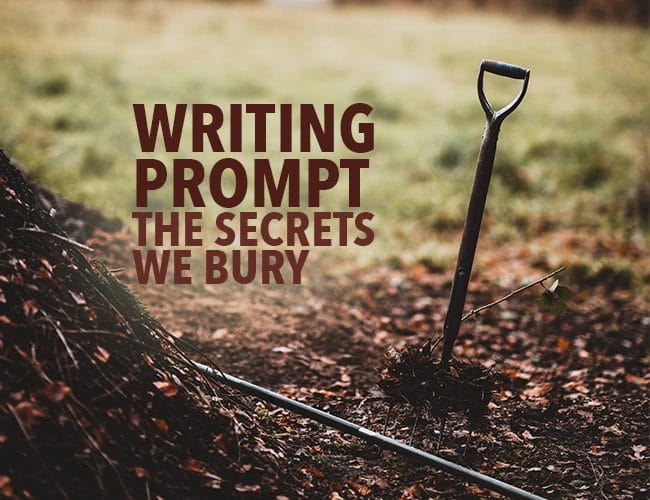 I’ve been revising a character and thinking about what secrets she keeps. As I wrote through several scenes, I suddenly found her with a shovel in the back of her grandmother’s property burying three jars of homemade strawberry jam and a pocket watch.

I write mysteries, so burying things isn’t too off genre for me, but I realized that we bury things every day, either literally or figuratively. I began to wonder how a digging scene or a burying scene might amp up the stakes, increase tension, or complicate matters. Think about what your characters might bury.

“
Writing prompt: Have your character bury or unearth something literally or figuratively. What change will it spark?
Tweet this
Tweet

Literal burials might include planting seeds, burying a beloved pet, installing a sprinkler system, or lowering a casket into a grave. A burial at sea, whether a dropped necklace or spread ashes, offers a number of interesting problems and complications.

Any of these actions in a scene could carry emotional weight or tension. Maybe a character is planting his first seeds in a tiny pot on the kitchen windowsill of his first apartment. Another character might be paying to have a sprinkler installed while her husband is at work, because he's refused. Now we’re waiting to see his reaction when he comes home.

The literal burial speaks of action and deliberation, and almost always carries a symbolic dimension.

Most stories contain at least one secret, and characters can hide them in all kinds of interesting ways.

Some of the methods may vary based on genre, such as the thriller’s encrypted files that need decoding or the mystery’s misleading alibi. We can figuratively bury everything from shopping trip receipts to alcohol.

Sometimes the burial is an omission—a lack of information given. Or we can flood a scene with details, burying the important bits, especially popular in mysteries where introducing a number of objects can confuse which one is important.

The figurative burial increases suspense and tension as we wonder when and how the secret will be discovered.

Not every story needs a secret to work well, but as I began noticing secrets and buried things in books and shows this week, I realized they are almost always present. I wonder why? Maybe it is the voyeur in us or the desire to figure things out.

Maybe a secret or a burial contains seeds of change and that is why they work so well in stories. Pay attention to the secrets and burial scenes you read or see this week. Which ones are handled well? Think about the symbolic repercussions of the scenes and how you might use something similar in your work.

What is the most interesting burial scene you have read or viewed? Why? Share in the comments.

Here's your writing prompt: have your character bury or unearth something literally or figuratively. Make sure it sparks a change.

Take fifteen minutes to write. When you're done, share your writing in the practice box below, and be sure to leave feedback for your fellow writers!