How to Write a Mystery Novel

So you want to know how to write a mystery novel. I’m delighted to hear it. I’ve been a mystery lover since I hid behind the Lincoln Logs in Mrs. Jenkins third grade classroom so I could finish my first Nancy Drew, undisturbed. Mystery hooked me that day, and has been leading me around by the nose ever since. 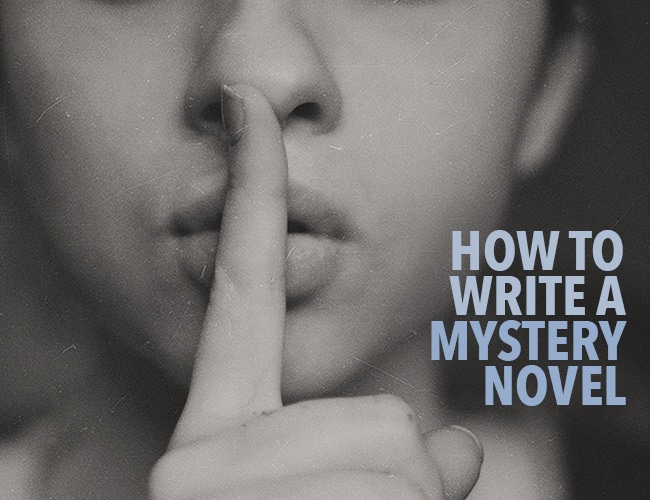 The best preparation for writing a mystery novel is to be a mystery reader. You need to be able to rely on reflexes developed after years of reading experience. And you’ll need the devotion of a true fan to get you through the rough spots.

What makes a mystery a mystery?

If you want to know how to write a mystery novel, you have to understand the conventions of the genre; you have to know what makes a mystery a mystery. Dean Wesley Smith, one of the most prolific mystery writers of our day, defines a mystery as a story that involves a crime or puzzle to be solved, and it must be solved by story’s end.

“Do not ignore this convention,” he warns, “unless you want to piss off your readers.”

I can attest to this, from a reader’s perspective. My own fault, I’m sure, but I read Donna Tartt’s The Little Friend, thinking I was reading a mystery, and nearly flung the book against a wall when I reached the end, mystery unsolved.

People who read mysteries like to solve puzzles and anticipate a resolution at the end. But reader expectations go far beyond that. Readers want to identify with the hero, to experience the thrill of the hunt and the satisfaction of seeing the perpetrator punished.

Fulfilling reader expectation is of paramount importance in writing a novel in any genre, but it’s crucial to writing a mystery. The mystery genre attracts a massive following, accounting for roughly thirty-three percent of fiction sales in the English language. If you can please even a portion of that audience, you’re setting yourself up for success in the mystery field.

“
A mystery novel needs a crime or a puzzle, and you’ll have to solve it by the end.
Tweet this
Tweet

Which type of mystery best suits your writing style?

Many sub-genres nestle under the mystery umbrella, and different writers are suited to different types of mystery.

Cozies, for instance, require a great deal of setting and character description, maintaining a slow pace while keeping it interesting. Cozies are gentle, characterized by a bloodless crime, often featuring a victim with few emotional ties to any of the characters, and the violence takes place off-stage.

Cozy writers must be able to produce upwards of 60,000 words, without a lot of action, and still make it engaging. Focus is on the main character, rather than the crime.

Police procedurals, as well as medical and legal mysteries, require extensive specialized knowledge. These are suited for professionals in these fields, detail-oriented writers who love the nitty gritty of procedure. Readers will chew you up and spit you out if you get it wrong, and light research is not enough to get you through.

This type of writer should also be good at building teams for their characters, as much of the clue gathering and analysis will fall to a group, each member contributing to the solution of the crime.

In Private Eye/Noir novels, readers expect a really interesting, believable main character. The PI will have interactions with police, and those must be realistic, so knowledge or research in this area is necessary, but not to the exacting degree required for police procedurals.

The protagonist makes a living solving crimes, doing background investigations, and such. Modern PI’s are crack computer experts, so a background in IT or related fields would be helpful to a writer who wants to tackle a PI novel. If the tone of the novel is dark, gritty, particularly bloody, or brazenly urban, it’s probably a noir.

And then there’s suspense—but that’s a subject for another day. Watch for it in my next post, as I couldn’t begin to scratch the surface here.

Mystery, like all genres, is rife with tropes, common themes or devices readers recognize and understand by implication. Some examples are “the butler did it” or “locked room mystery.” While these may strike you as trite, most of them are time-honored and beloved by mystery fans.

The trick is not to avoid them, but to innovate them, finding fresh ways to approach them so that readers get the best of both worlds—a comfortable familiarity and a rush of surprise.

I’ve heard there are mystery writers who write without an outline, striking boldly into the dark and trusting that all the threads that go into weaving a mystery will align in miraculous fashion. How they accomplish such a thing is the real mystery. I suspect there are more closet plotters than we’ve been led to believe.

Knowing the end from the beginning is particularly important when crafting a mystery, so if you’re adept at using an outline, that’s a big step forward in completing your novel. And crafting the outline for a mystery novel can be a boatload of fun. It may even be my favorite part.

An outline should never be a confining box, but more like a scaffold to support you while you construct the story. I’ll cover outlining in more depth in another post. For now, let’s take a quick look at four suggestions from Lester Dent, creator of the Doc Savage series. Some say he was a hack, but for a hack, he sure got a lot of things right.

When writing a mystery, he suggests you consider these four areas:

One more quick suggestion for outlining, this from Scott Meredith and Algis Budrys. Formulate a…

Remember, in a mystery, the puzzle must be solved by the end. So, if you decide to have a tragic or ironic ending with the hero’s failure, you still have to provide a solution to the puzzle and satisfy your mystery savvy readers.

Once you’ve chosen your sub-genre, studied the tropes, and created your plan, you’re ready to write. Here are a few more things to keep in mind when writing a mystery.

Most mysteries open with the crime. It’s a good way to grab reader interest right up front. Cozies are an exception to this rule. If you’re writing a cozy, you need to spend a couple thousand words grounding your reader in the setting, with the character, before you allow the crime to intrude on that world.

Just because you have an outline doesn’t mean you have to write from word one to the end. Writers are unstuck in time. We can move freely through the landscape of our novel, write the climactic scene first, then go back and make sure we set it up right in earlier scenes. Don’t feel like you have to plod forward on a rigid track.

You have to be fair to the reader, putting the clues in plain sight. That said, there are ways to obscure bits of information so readers don’t really see them.

One of the best ways is to use a list. Readers absorb the first three items on a list, and maybe the last one. Anything that occurs between number three and the last item blurs out and virtually disappears from the reader’s memory.

It takes time for a reader to get through a full-length novel. You can practically give the reader the solution up front and by the time they reach the middle of the book, they will have forgotten it.

So don’t be afraid to lay out what the reader needs to know. As long as you don’t surround it with fanfare, it will fade out until the end when the readers thinks, “Oh yeah, I remember now.”

This is not to say that mystery readers are dumb. Not by any stretch of the imagination is that the case. My biggest challenge in writing mysteries has been to find the balance between holding back too much and giving it all away.

The award-winning mystery writer Kristine Kathryn Rusch advises never to hold back information from the reader. Give it all away, she says, but do it skillfully. Experience has proved her right.

How to write a mystery novel is a huge subject, and goes far beyond the scope of this article. For more information, here are a few good resources:

Keep studying and learning your genre. But don’t let study keep you from writing. The best practice comes through writing, so if you want to write a mystery novel, give it a go!

Do you have an idea for a mystery book? Have you devised a clever puzzle you think would make a great mystery novel? Share something about it in the comments section.

Consider your writing style and choose a mystery sub-genre you think is a good fit: cozy, police/medical/legal procedural, private eye/noir, or suspense. Write the opening scene for such a mystery, making sure you respect the conventions and reader expectations.

Write for fifteen minutes. When you’re finished, post your practice in the comments section. And if you post, please leave feedback for your fellow writers.