If you're reading this, then you want to be a better writer. However, becoming a better writer is elusive, isn't it? It's more art than science. There are hundreds of writing rules, thousands of words to know, and millions of possible ways you could write a simple message. There are also words to avoid in writing. 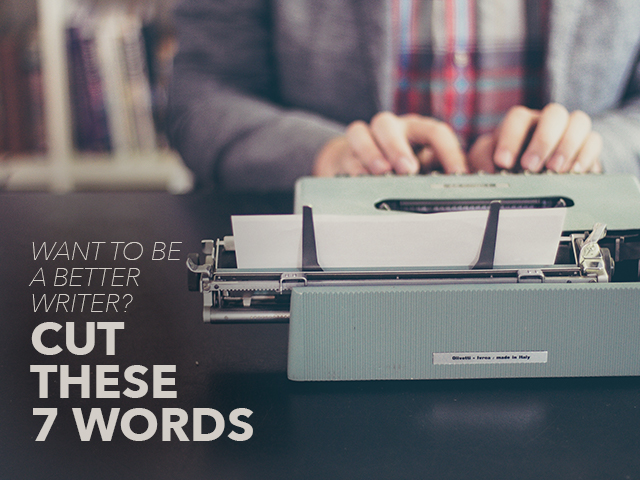 One Writing Rule That Will Make You a Better Writer

In this article, we'll discuss seven words you should avoid, but if I had to give you one piece of advice about how to become a better writer, this would be it:

Being more specific is the piece of the writing advice I give to nearly every writer I work with.

Unfortunately, there aren't seven magical words that you can use to make your writing better.

Instead, these seven vague words are KILLING your writing.

If you want to follow writing rule number one to be more specific, then you need to look out for these seven words. They're vague and are usually a shortcut to what you're really trying to say.

Every time you catch yourself writing with any of these, try to find a better (and more specific) way to phrase your message.

The problem with writing about what not to do is that you inevitably do exactly what you're telling others not to do.

If you catch me using any of these seven words or phrases in this article or elsewhere, you're welcome to email me angrily, calling me a hypocrite.

Consider, though, that none of us, especially me, have arrived at the summit of editorial perfection. Also, please remember that writing is still an art, not a science, and the most important rule of art is to break the rules!

Without further delay, here are the seven words and phrases to avoid if you want to become a better writer.

Example: One of the most important writing rules is to be specific.

Instead: The most important writing rule is to be specific.

This is true when it comes to short story writing, novel writing, or even academic writing. As a writer, you should be confident in what you're writing about. Use words that are certain, not wishy-washy.

Here is the definition of the word “some:

By definition, the word “some” is vague, and as you know, vague writing is bad writing.

If you want to become a better writer, avoid “some” and all of its relatives:

Using “some” in any form often works as a filler word or boring writing, and it makes it hard to visual what you're talking about, too.

Good writing sticks to specifics, so instead of leaning on vague descriptions that include “some,” think about how you can create an exact picture by putting detail into the description.

We use the word “thing” constantly. Even as I was writing this article, I had to fight to avoid using it.

However, the word “thing” is a shortcut and a sign of vague, watered-down writing. If you see it in your writing, think hard about what you're really trying to say.

A good way to flag how often you use the word “thing” is the search and find tool. Take a look at how many times you use this weak word in your writing, and replace it with what you're actually trying to write about.

On a regular basis, there is a noun you're actually trying to explain, and “thing” doesn't describe that noun well.

4. “To Be” verbs, Especially Before Verbs Ending With -Ing

“To be” is the most frequently used verb in the English language. Its conjugations include:

Because “To Be” verbs are so common, we easily overuse them, especially with progressive verbs, verbs that end in -ing.

Example: “Spot was running through the woods.”

Instead: “Spot ran through the woods.”

“Spot was running” is a good example of a verb weakened by “to be.”

“Spot ran” on the other hand, is a much stronger example.

Instead, consider how to use vivid verbs, or action verbs. In fact, I'd argue vivid verbs are the most important words used in any story or written word because this is what actually shows instead of tells.

Another writing tip to keep in mind is that “to be” verbs often use passive voice, and as a writer, you want to write in active voice, not passive.

The example above models this.

Why cut the word “very”? I'm going to leave this one to the pros:

“Substitute ‘damn' every time you're inclined to write ‘very,'” said Mark Twain. “Your editor will delete it and the writing will be just as it should be.”

This goes for New York editors working in big publishing houses and freelance editors, and it should be something you cut when editing your own work.

It's not unlike fancy dialogue tags like “hollered” or “exclaimed,” the overuse of the word “very” stand out in a distracting way.

It makes the writing clunky instead of uniquely descriptive.

“So avoid using the word ‘very’ because it’s lazy. A man is not very tired, he is exhausted. Don’t use very sad, use morose. Language was invented for one reason, boys—to woo women—and, in that endeavor, laziness will not do. It also won’t do in your essays.” —N.H. Kleinbaum, Dead Poets Society

“‘Very' is the most useless word in the English language and can always come out. More than useless, it is treacherous because it invariably weakens what it is intended to strengthen.” —Florence King

Adverbs—like loudly, painfully, beautifully—are well-meaning words that do nothing for the reading experience.

Good writing is specific. Good writing paints pictures in readers' minds. But which sentence paints a better picture in your mind?

Sentence 2: “Her loud laugh seemed to reverberate through the party like a gong. Heads turned to see where the ruckus came from.”

Adverbs do lend verbs a glimmer of meaning, but it's the difference between gold-plated and solid gold. Go for the real thing. Avoid adverbs.

By doing so, you'll also probably improve your word count, and writing fewer words that tell a story is better than adding adverbs just because you think it makes a detail stand out.

7. Leading words: So, mostly, most times, in order to, often, oftentimes

Most times—often even—you don't need leading words. Cut them to sharpen your writing.

I've even read an argument that beginning your sentence with the word “so” can sound condescending. What do you think?

You have to think.

This, of course, is how you become a better writer. You labor over words. You build up meaning one sentence at a time. And eventually you become so fast and competent that it's easy, simple to write this way.

Just kidding. It's never easy. It's worth it, though.

Do you try to avoid any or all of these words in your writing? Let us know in the comments section.

Rewrite the following paragraph, avoiding the seven words above.

One of John's favorite things was the view of the Brooklyn Bridge from the East River. He would sometimes walk there early in the morning when it was still very dark in order to see the city in first light. Often he would see others there who were walking and enjoying the city as well. He was somewhere near Squibb Park when someone came up behind him. She had really blonde hair and was very beautiful and she bumped him roughly as she was running quickly by. He fell, painfully, on his side, and so the woman stopped, and was jogging in place as she asked if he was okay. So, he thought, what am I going to do now?

Write for fifteen minutes, packing as much specific detail as you can into the paragraph. When you're finished, post your practice in the box below, and if you share your practice, please be sure to leave feedback on a few practices by other writers.