4 Bland Character Problems and How to Fix Them

I’m working through a revision, and one of my main problems is the protagonist. My editor and a beta reader both suggested amping up her emotional appeal, leaving comments such as, “I’m not invested in this character yet” and “I want to care about her, but I don’t in this scene.” Ouch. I’ve created a bland character. 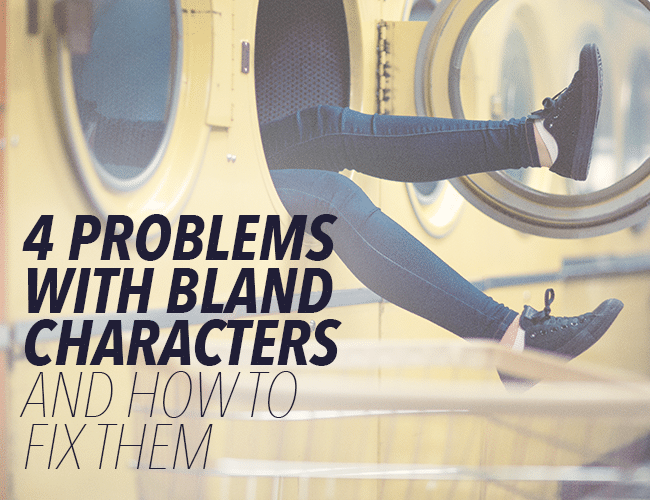 As writers, we can build astonishing worlds, but without a strong character, it’s just scenery. Characters keep us reading in every genre. We’ve all put down a book because the character didn’t resonate or interest us. How can we identify weak characters and build a stronger emotional connection?

A character who isn’t connecting with readers probably has one of these four problems.

This is the character who always knows what to do in every situation. She has full self-awareness and saves everyone around her. She’s also annoying. No one is perfect, and even larger-than-life heroes from classic literature had flaws and weaknesses.

I can identify a too-perfect character when I look at the conflict. A too-perfect character isn’t fazed by conflict, and she faces it successfully every time. The reader struggles to connect with this bland character since we all fail, sometimes even in low-level conflict like training a dog to walk on a leash or walking without tripping.

One way to fix a perfect character is to let her believe she is perfect. Then, make her fail as she attempts to engage the problem or conflict. This will rock her understanding of herself and the world.

You can also give her a wound or weakness that keeps her from getting what she wants. Either one will improve the character’s emotional appeal.

We’re all a little broken on some level (like our characters), but what happens when the character is too broken? He loses the ability to act in his world.

I realized one of my key characters was too broken when I looked at how he moved in the story. He had been devastated by a circumstance, and it resulted in passivity. He was a bland character, always tagging along with no agenda or purpose.

The too-broken character needs a goal and motivation to improve his emotional appeal. He can keep his brokenness if we see him fighting for life. Sometimes even a negative goal keeps us watching (The Girl on the Train or Gone Girl, cases in point).

A boring character fails to capture the reader’s attention and interest. I’ve fallen into this trap while exploring realism. I wanted my characters to be everyday people with everyday problems. But nobody wants to read about doing laundry unless something extraordinary happens during the wash cycle. As readers, we’re trying to escape the laundry.

“
Nobody wants to read about doing laundry unless something extraordinary happens during the wash cycle.
Tweet this
Tweet

Fix a blah character by deepening the characterization through action. Blake Snyder calls this giving the character a “save the cat” moment, which means, “The hero has to do something when we meet him so that we like him and want him to win.”

I would go a step further and suggest we don’t have to like the character, but we have to see some glimmer of what makes her uniquely human—even if she is a villain or anti-hero.

Find what is interesting or unique about your character, even in a commonplace setting or situation. Then show us that characteristic through the character’s action to build an emotional investment.

It’s the difference between a woman folding laundry and a woman holding the corners of a sheet with a newly widowed, bent-over man in a USS Nimitz ballcap in the laundromat.

A weak character may result from a feeble goal, a weak antagonist, or a lack of action.

Sometimes a weak goal lacks specificity, such as “to be happy.” Make the goal specific: what would make this protagonist happy? (Spoiler alert: the things we think will make us happy rarely do, but our misguided beliefs about happiness are fiction gold.)

Sometimes a goal will appear weak simply because you haven’t given it a proper context.

“
Almost any goal can work in a story if the reader understands why it’s important.
Tweet this
Tweet

A friend recently wrote a story about a kidnap victim who wanted a glass of water. On the surface this goal appears to be weak, but she found a way to make the glass of water undermine the kidnapper’s plan. The writer made me care about that victim getting a glass of water, as if it were life or death.

We also shortchange our characters when we write weak antagonists. Is the antagonist a sleepy kitten? While adorable, it isn’t going to require the protagonist to work very hard to reach his goal. If the antagonist is weak, make him formidable.

Finally, a character may fail to connect because he won’t act. He can’t just go with the flow. Track the decisions and action through your story and evaluate where the character can take stronger action.

If the protagonist is in a car accident with his children and has to choose which of his two children to pull out of the burning car first, who does he choose? Put your character in a tough spot and make him act.

Even the most indecisive reader who has trouble choosing a grapefruit at the store wants to become emotionally invested in a character who makes strong decisions, even when the decisions’ results are catastrophic.

When I think about my favorite stories and books, the first image that comes to mind is almost always a strong character. Bland characters don’t cut it—it’s the strong ones, the interesting ones, the ones with flaws, the ones who take action, that we remember.

Who are your favorite characters and why? How did they avoid being too perfect, too broken, too blah, or too weak? Share in the comments.

I told you above no one wants to read about the laundry unless something extraordinary happens during the wash cycle. Well, that’s your challenge for today. Here’s your prompt:

He was folding the fitted sheet when . . .

Take fifteen minutes to tell us the rest of the story. Make sure to give your protagonist a failure or weakness and a goal, and require them to take action.

When you’re done, share your practice in the comments, and be sure to encourage one another by leaving feedback on other writers’ stories.